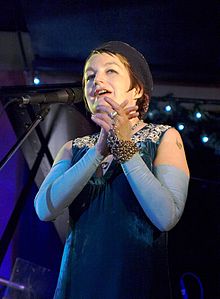 The Smith Center for the Arts welcomes singer-songwriter Jane Siberry to Club 86 as part of its Jan Regan Club Series on Friday, April 26 at 8 p.m. Club 86 is at 86 Avenue E in Geneva.

Iconic and enigmatic, Jane Siberry’s work has spanned three decades, with the release of 14 studio albums and performances on concert stages around the world. Her 1985 album The Speckless Sky was a huge critical and commercial success, and the follow up albums — The Walking, Bound By Beauty, When I Was A Boy — and her signature song, “Calling All Angels,” cemented her status as one of the world’s foremost performance artists.

Siberry’s recent album, Angels Bend Closer, has been released to rapturous acclaim> She will be performing tracks from this alongside some new songs that have not yet been recorded. A Canadian native, Siberry’s songs have been covered by numerous artists, with particular success by k.d. lang on her stunning renditions of “Love is Everything” and the 23rd Psalm-inspired “The Valley.”

She is recognized as a forward-thinking artist, using her creativity both in song and in how she operates in the music business. She was one of the first to setup ‘self-determined transactions’ (otherwise known as ‘pay what you wish’) on her website. Preferring to create without grants or fundraisers, she continues to explore coaching, webinars, online fashion stores and passive income streams in order to “keep the joy up” and remain aware that :it is a privilege to be a musician.”

This concert is part of The Smith’s Jan Regan Club Series, which gives adventurous music fans a chance to discover or rediscover indie artists in an intimate and unique setting.  The media sponsor is sponsored by Finger Lakes Public Radio WEOS 89.5 FM Geneva.

Club 86 will be offering a cabaret-style dinner menu starting at 6 p.m. Reservations are required. Ticket holders can make reservations directly with Club 86 by calling 315-789-4955. Doors will open for non-dinner patrons at 7:30 p.m.

The Smith Center for the Arts, stewards of the historic Smith Opera House, provides diverse arts and educational enrichment opportunities year-round for Finger Lakes residents and visitors. The Smith Opera House is at 82 Seneca St. in Geneva, NY.