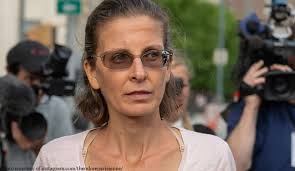 By Village Diane Marc Agnifilo and Teny Geragos — Keith Raniere’s attorneys were also in the courtroom for Clare Bronfman’s follow up Curcio hearing yesterday –the day following her “fainting” spell. Ben Brafman was also there. [He is senior partner with Agnifilo and Teny Geragos in the law firm Brafman and Associates]. Brafman had represented […]

Ben Brafman was also there. [He is senior partner with Agnifilo and Teny Geragos in the law firm Brafman and Associates].

Brafman had represented Mark Geragos in the Nike case. But Brafman told the court he was no longer representing Geragos, and he was only Geragos’ attorney for a couple hours.

This time, Clare’s legs were not wobbly. She seemed a lot stronger than she did the day before. She did not appear faint.

Judge Garaufis asked her how she was feeling?

It was hard to hear Clare’s answers.  Her voice sounded hoarse.

He explained the purpose of the Curcio hearing was to ascertain actual or potential conflicts that would interfere with the ability of counsel to represent her properly.

There were a number of issues which have arisen with lawyers, he explained.

The judge asked her to confirm that Michael Avenatti is not representing her.

Clare said, “That is correct.”

The judge asked if she was aware that in media reports about the criminal complaint against Avenatti, in the Nike case, that Mark Geragos has been identified as Co Conspirator #1?

The judge explained that Geragos has criminal exposure in the Southern District of New York.

“Mr. Geragos may be prosecuted. You understand that?,” he said.

He could be charged or prosecuted, the judge said. “I’m not saying it’s likely or unlikely but it’s possible Mr. Geragos may be prosecuted.”

She understood that, she said.

Clare was asked if she was aware of a meeting on March 19, [where Geragos and Avenatti met with Deputy US Attorney Mark Lesko to see if she could get a plea deal for Clare, if they were to provide evidence to the US. Attorney in another case.  This would result in a potential purchase by Clare of years off her sentence in return for some big money paid to her lawyers. Justice for sale.]

Clare said she was aware of the meeting.

The issue was raised that the Avenatti/Geragos case might bleed into her criminal case.

At one point, Donna Newman was answering questions the judge was directing to Clare.

The judge seemed heated when he said, “I want an answer to my question [from Clare]” and for Newman not to filter answers for her.

He said to Newman, “I want her answers…. If you can’t do that, I’ll appoint somebody else.”

As for her fainting, I was chatting with reporter who said that Geragos claimed Clare really did lose consciousness for 30 to 45 seconds on Wednesday.  To me, that makes it more strange that she rejected going to the hospital, but it was her decision.

When I saw her faint on Wednesday, I thought it was genuine. I’m not 100% convinced anymore. I saw her body go rigid. That doesn’t happen when you pass out.

Another observer who saw the same thing interpreted it differently.  She felt that Clare collapsed into the chair. I wonder if Clare has a different medical issue? I’m not 100% convinced she did not fake it.

As for her physical appearance, the first thing you notice is she is very, very thin.

She always wears very baggy pants. So you can’t really tell how thin she is below the waist.  She is a little broader in the back than I initially thought, but still it doesn’t look like she has any extra upper body weight.

Her complexion was better than trhe day before when she collapsed. She didn’t seem to have much color in her face.

At some point during the Curcio hearing, the judge said something about jury selection. I wasn’t really able to catch all of that, but I understood, that at this point, it looks like the trial is going forward as planned.