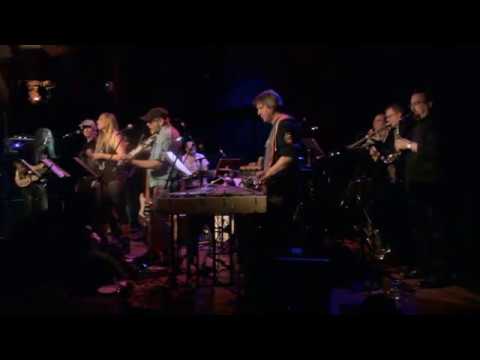 The Furious Bongos are throwing a weeklong party for Frank Zappa!  Kicking things off in Baltimore on Mother’s Day, they’re about to hit the road for their first North American tour. Bring your ponchos!

Cherry picking its members from across the country to include musicians who have played alongside heavyweights like Yo Yo Ma, Mick Fleetwood, and Les Paul, The Furious Bongos isn’t strictly a tribute project.  Doing a note-for-note rendition of Song X from Album Y while staring at their shoes didn’t seem like the proper way to go about it, since Zappa’s music was constantly evolving and adapted to the musicians he was playing with at a given time.

They tracked down hundreds of pages of transcriptions and quickly scribbled notes from former band members and other sources, painstakingly compared different versions of the songs, and even dug up copies of rare scores in Frank’s own hand (coffee stains included). Arthur Barrow, Zappa’s bassist and Clonemeister from 1978 to the early 80s, was instrumental in this effort.  Barrow will be joining the group for the whole tour!

The Furious Bongos sound less like a cover band, and more like a band that Frank might have assembled himself, playing unique arrangements you won’t hear anywhere else, with a sense of humor and plenty of eyebrows.