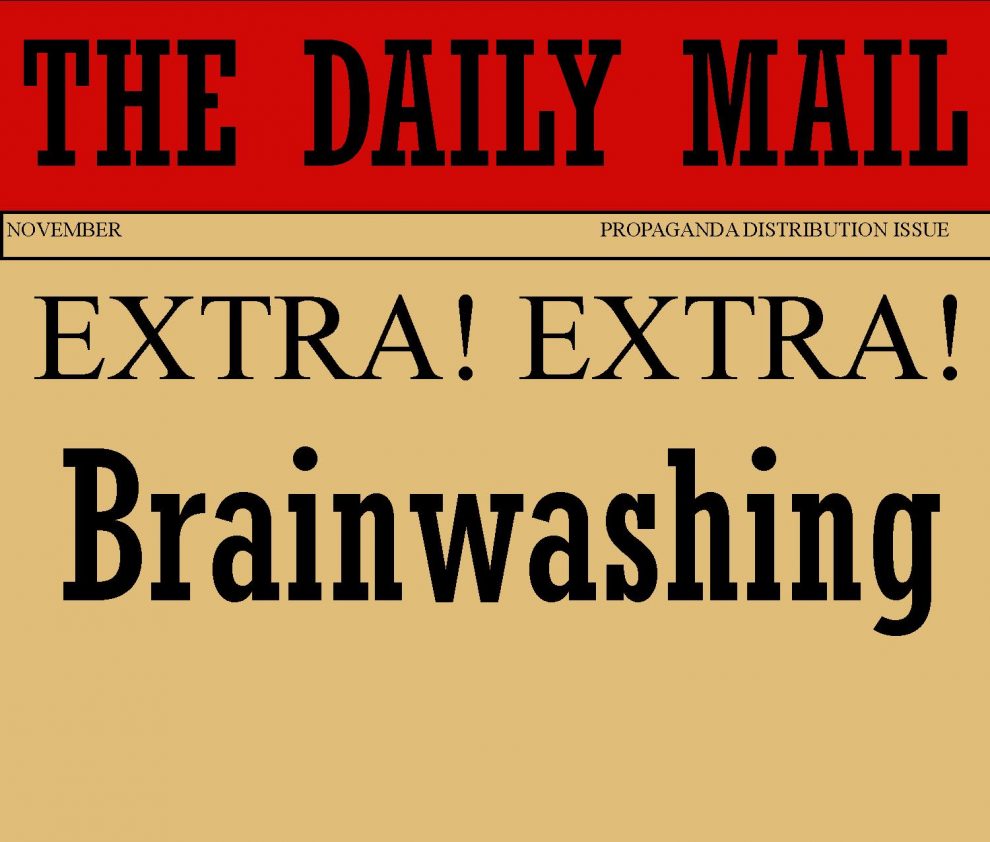 “Propaganda is the Executive arm of the invisible government”

The British Psychological Society is located at 30 Tabernacle St. in the City of London. The Tavistock Institute of Human Relations occupies the same address.  The City of London, which is different than “London”, is a corporation which has its own police force and its own Mayor. Many of the worlds’ most influential banks are located within the Square Mile as it is often referred to, and enjoy certain perks because of this.

Wellington House which later became the Tavistock Institute of Human Relations was presided over by brothers and media magnates, Harold and Alfred Harmsworth who were given the titles of Lord Rothermere and Lord Northcliffe respectively.  Lord Rothermere was related to Rothschild by marriage. It was formed to be a propaganda machine to manipulate the masses into WANTING to go to war.

In 1896, the Harmsworth brothers founded the Daily Mail and also launched the Daily Mirror. Alfred (Northcliffe) died in 1922 without an heir, so Harold (Rothermere) took over all of his holdings. In 1922, the Daily Mirror alone had a circulation of three million.  By 1929, Harold owned fourteen daily and Sunday papers and had substantial interest in another three.  In other words, he alone OWNED the media of that time. Today, the Daily Mail is the third-most-circulated daily newspaper in the UK and the Daily Mirror is the 5th.

Being related to Rothschild, owning the media, being situated in the City of London and installed as a propaganda machine to sway people to WANT to go to war was a very big deal.

Enter the father of Propaganda and Social Engineering -Ed Bernays the double nephew of Sigmund Freud who coined the phrase: “We want to make the world safe for democracy.”

Ed Bernays was a prominent faculty member of the Tavistock Institute and changed the word “propaganda” into the current phrase, “Public Relations”.

Uncle Sigmund’s ideas on Mass Psychology had a profound effect on Ed Bernays, who would use these techniques to propagandize the masses.  Bernays invented the ‘third party endorsement’ idea whereby you get a well known person to endorse something so that others will believe it. He was the guy who made smoking popular – especially for women. He is the man behind Fluoride in our drinking water and making people think that it is safe.

He sold to the highest bidder, held allegiance to no one and believed that fear was integral to the success of propaganda techniques.

Through the use of Rothmere’s newspapers, Wellington House, under the tutelage of Bernays tried out war propaganda techniques to get unsuspecting young boys to WANT to fight on the battlefield making the world ‘safe for democracy’. It was discovered that people had a poor ability to reason especially if they were uneducated, which at the time made up most of the people that they were targeting – young men the age of conscription.

Great success was achieved stimulating mass emotion and reaction through the use of slogans and images of national pride and the protection of one’s family. This is how they got young men to WANT to go to war.

Bernays took his uncle’s ideologies to heart and together with Walter Lippman, a pulitizer prize winning journalist, set upon a path manipulating the American public opinion in ways that had never been seen.

As recorded by Dr. John Coleman, in The Tavistock Institute of Human Relations – Britain’s Control of the United States, “Lippmann and Bernays were appointed by Wellington House to manipulate public opinion,” and were installed into Woodrow Wilson’s White House and becomes the first President to have a war managed by a civilian committee…directed by a 23 and 25 year old.

Working closely with Wilson, Bernays was the man behind the fear mongering of communism and was crucial to the development and formation of mass manipulation and social engineering using the same pseudo ‘scientific’ technique that was used in psychoanalysis invented by his Uncle Sigmund.

Lippman introduced the concept of the Cold War and coined the words, ‘stereotype’ and ‘gatekeeper’, referring to journalists and explained how they (journalists), had become gatekeepers of information and instruments of comprehensive manipulation of public opinion.

‘The gatekeepers decide what will be admitted to the public and what will be withheld. Every paper when it reaches the reader is the result of a whole series of selections’.  Insofar as journalists use the same rules of selection, they create a certain consensus in reporting, which affects the audience like a confirmation (they’re all saying it, so it must be true), and the stereotype-supported pseudo-environment is installed in the minds of the public.”

Not surprisingly, Wilson instituted what is now called the Press Corps in the White House. We can surmise as to who gave him that brilliant idea.

On October 12, 1913, Wilson pounds the first nail in the coffin for American Commerce by abolishing or drastically reducing protective Trade Tariffs and set the stage for complete destruction of fair trade for the US by NAFTA, GATT and the WTO.

On Dec. 5, 1913 Wilson signs into law the Federal Income Tax Act – which signaled the first time that Americans were taxed on their income. Income tax is not part of the US Constitution.  A couple weeks later, he gave the American people the gift that keeps on taking with the Federal Reserve Bank Act which he signed on Dec. 23, 1913.

The Federal Reserve is born. The US is never the same again.

Six and a half short months later, Europe was involved in WW1.  17 million people lost their lives.

“Most historians agreed that without passage of the Federal Reserve Bank Act, it would not have been possible to start that terrible conflagration,” says Dr. Coleman and points out, “ …that before it was sent to Wilson for his signature, a copy was given to the sinister Colonel Edward Mandel House as the representative of Wellington House and the British oligarchy represented by the banker, J.P. Morgan.”

After the propaganda victories of the First World War and the Federal Reserve banking system were secured, Wellington House would grow into the Tavistock Institute in 1921.

In his book entitled, The Tavistock Institute of Human Relations, Dr. Coleman states, “Without Tavistock, there would have been no WWI and WWII, no Bolshevik Revolution, Korea, Vietnam, Serbia and Iraq wars.  If it were not for Tavistock, the United States would not be rushing down the road to dissolution and collapse.”

Germany, Russia, Britain and the US had their destinies shaped by Tavistock through ‘mass brainwashing’, ‘inner directional conditioning’ and ‘mind control’ unbeknownst to the people who were undergoing this mass indoctrination.  The fall of dynasties, the Bolshevik Revolution, WWI and WWII were all manipulated by Tavistock.

The destruction of old alliances and boundaries, the upheavals in religion, morals, family life, economic and political conduct, decadence in music and art can all be traced back to mass indoctrination practiced by the Tavistock Institute Social Science scientists.

Understanding this, one can easily see how mass brainwashing has been being used with the use of the media and the mind control techniques of psychiatric propaganda.