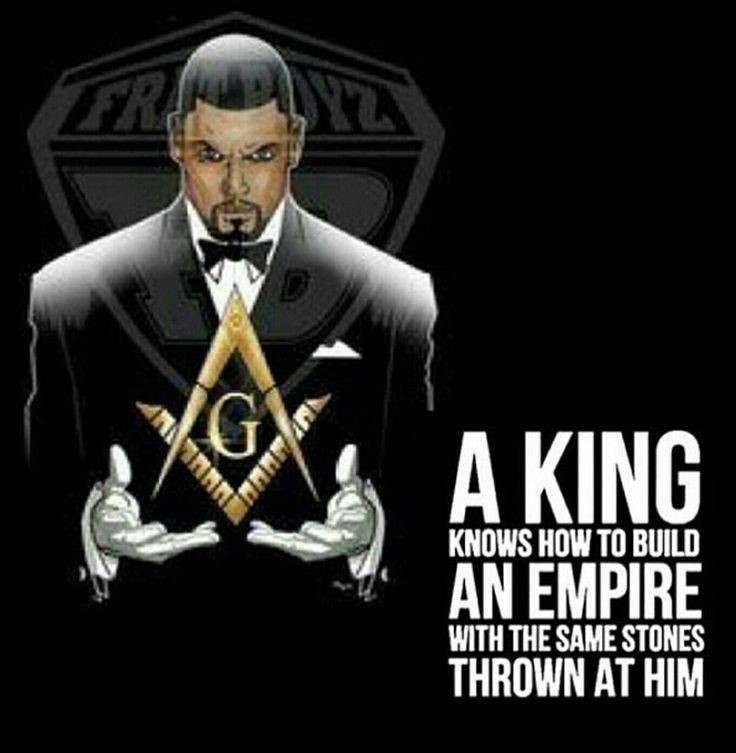 The craving to socialize, feel accepted and respected drives all cultures into forming or joining groups; this is all part of humankind’s evolutionary instinct. Freemasonry’s visible influence and power is that it provides this for its members and initiates.

When I was a lad enrolled in the Freemasonry auxiliary youth organization, DeMolay, I was being told that the true influence of Freemasonry is it being and “remaining a close-knit society” that promotes equality, brotherly love, compassion, community involvement, and integrity. That was true as long as you were white, since none of my friends of color I was being told could join me in my DeMolay Chapter.

Disheartened, learning this after being well celebrated by my gaining recognition and group acceptance made visible to me in being presented a coveted trophy for being the most improved player in the DeMolay Chapter’s sports team, I cut ties. I did not see any point to put the effort in to become a Mason to associate with “two faced” elitists.

At age 16, I had the notion I knew more about the world and ethics than my Masonic elders combined. I was made rebellious by my youthful hubris and ignorance that all intelligent young men possess in their trying to assert their identity and take their rightful place amongst men by standing on principle.

Yup! A little knowledge makes you dangerous to others, and yourself, lol. 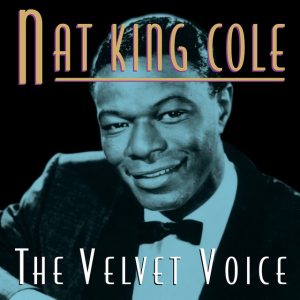 Years later, what changed my mind about Freemasonry is my maturing into adulthood and learning one of my favorite musical artists, Nat King Cole, was a Mason. That there did exist Masonic lodges with people of color that goes as far back as the late 1700s when there emerged, Prince Hall, a black man who changed the panorama of the fraternal organization.

Hall incorporated the altruistic ideas of Freemasonry to further equal rights among the races, in Colonial America.  His legacy encapsulated everything I had thought Masonry failed to be when filled by youthful idealism.

The best way to describe Prince Hall or what it means to be “an ideal Freemason” in my mind was that he knew how to build an Empire with the same stones thrown at him.

This was a highly literate free black man living in, Boston, Massachusetts, who used his wit, knowledge and network he gained from Freemasonry to further the rights for African-Americans.

Prince Hall petitioned for legal rights for freed black slaves and to abolish slavery and pushed for equal education among the races. He lobbied the Massachusetts Committee of Safety to allow blacks to fight in the Continental Army and even had orchestrated a petition. 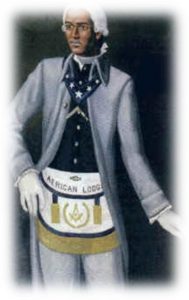 When word got out his petition was declined, England, influenced by his ideas saw an opportunity and then proclaimed if blacks fought with the British army they would gain their freedom at the end of the war. Hall’s suggested recruiting tactic was so effective for the British that the Continental Army had no choice but to have removed its block on admission of blacks into the military.

It is unfortunate the sacrifices of his fellow black soldiers were not valued after the war and when America’s first Congress ratified the Constitution & Bill of Rights, absent the promise of abolishment of slavery.  This did not deter Hall, who continued to be politically and socially active for the equal rights of blacks in the newly formed United States of America.

In 1784, at the height of bigotry with legalized slavery in the Southern Colonies, Prince Hall was able to successfully petition to the Mother Grand Lodge of England in which he was granted the recognition of African Lodge No. 1, renamed to African Lodge no. 459, and later establishing lodges in Rhode Island and Philadelphia.

Apparently, Prince Hall was such an influential and positive leader in Freemasonry, that in 1791 he was named Provincial Grand Master.

From that time on Freemasonry blazed a trail in the field of race relations that they still pursue to this day.  There exist a photograph that shows 10 black men, all members of the Williams & Walker Co, a touring vaudeville act. The photo was taken to memorialize them being initiated into Freemasonry in Lodge Waverley, No.597, on 2nd May 1904.

Many photographs showing black Freemasons at the turn of the 20th Century exist and can be found by doing Google Image searches, today. Quashing the white discriminatory militant black claim, “Black Masonry did not exist until affirmative action.” 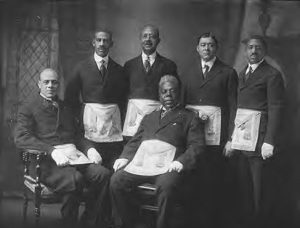 Noteworthy, the Masons I spoke with regarding Albert Pike and the KKK appear unaware of the self-incriminating evidence against him.

Invested in the image of Freemasonry, all of the Mason’s I spoke with claim Pike’s conviction, as a war criminal, is nothing for me to be taken back by. Rationalizing it away by declaring,   “…confederate generals were made the targets of political persecution at the end of the civil war, he received a Presidential Pardon.”

Leaving out the important part, President Johnson, who pardoned Albert Pike, was made a Master Mason in the White House shortly before the issuance of that pardon. Based on this, the detractors of Freemasonry level the allegation that Masonry goes so far as to obstruct justice, to protect its own.  That this is the influence and attraction of Freemasonry.

Masons insist (and this is also reflected online) that there exist no proof to support Albert Pike being connected to the KKK, while also emphasizing that the KKK of today is no longer a reflection of the KKK, in Pike’s lifetime.  Then point me in the direction of the encyclopedia of Arkansas, Pike’s home state.

Unfortunately, my findings are not in sync with the encyclopedias nor its sources created almost a century after my sources that are credited Academics, like Dr. Fleming, present to witness history in its making regarding Albert Pike and the Ku Klux Klan.

Victim families as well as historians proclaim the KKK masterfully waged war on blacks that killed growth and prosperity of black communal life, purposefully, condemning them to live in poverty.

Equally, diabolical, this oppression force them out of desperation to be lawbreakers just in order to survive by which one out of three males are returned to bondage in the form of Southern chain gangs. This giving rise to the Black Codes and Convict Leasing, that expanded African American slavery by some say Pike notice of, exploiting the loophole in the 13th Amendment to the US Constitution, that reads:

“Neither slavery nor involuntary servitude, except as a punishment for crime whereof the party shall have been duly convicted, shall exist within the United States, or any place subject to their jurisdiction.”

A hundred years later, the Federal Prison Industry reinvented itself into a corporate entity, UNICOR.  It creates demand for forced labor through marketing, and prisons are built in record time.  According to the International Labour Organization, forced labor in America generates an estimated $150 billion in profits per annum, as of 2014.

University Professor and Dean, Dr. Walter L. Fleming, Civil War and Reconstruction in Alabama; New York: Columbia University Press; Ku Klux Klan, its Origin, Growth and Disbandment. New York: Neale Pub. Co. 1905; and Susan Lawrence Davis’s 1924 Authentic History, Ku Klux Klan, 1865-1877, details straight from the mouths of original members how KKK Tribunal Law and rituals of initiates into the KKK was given to them by 33 Degree, Master Mason, Albert Pike; joined by other distinguished 33 degree, Master Masons, in being strategists and stewards of the KKK.

Allegedly, these white supremacy Masons marched with their brethren KKK in white supremacy celebratory parades, as late as 1920’s, and as far North, as Detroit.  Haters claim it is in their Masonic lodges that lawyers, like Pike, research and discovered the loophole in the 13th Amendment. Then concocted the plot to enslave black men and keep them enslaved for generations by which to enrich them. 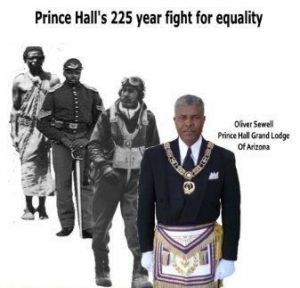 The consistent hype and selling of Freemasonry as being free of racial discrimination does themselves a disservice and is about as useful an argument as lipstick on a pig, when there visibly exist racial tension and discrimination in Freemasonry — a power struggle apparently ongoing to this day.

Likewise, in 2006, one old Confederate Masonic lodge in Alabama proudly announced it had its first official Black member indicative black men weren’t possibly considered welcome, prior.  His admittance may just be a token membership for that matter.

It appears that racial discrimination is not one sided, either. This racial tension in Freemasonry lodges has more to do with the complex dichotomy of human beings and cultural upbringings.

My findings are that in spite of racial discrimination and its Black and White checkered past, the vast majority of Freemasonry visibly in and of itself exist to help a person to be a better man each day, grow from the experience and camaraderie.

This is how a celebrated racist bigot, a Grand Master Mason of 33 degrees, like Albert Pike, could exist and reach a level of global prominence within Freemasonry just as could Prince Hall find the same if not greater prominence in the same legacy that is equally legitimate, in Freemasonry.

In fact, Mason’s inform me much of the framework for the Prince Hall Lodges comes from the assistance of Albert Pike, that he redacted his bigoted statements. However, as an outsider I could not confirm nor disprove that assertion as Masons are still a secretive fraternity that guards and does not (at least with me) share its historical documents even if it will exonerate misgivings about them.

What can be expected and anticipated in advance is that on the whole, from my own personal interactions, Freemasonry, while mixed as well as made diverse by Black and Whites only lodges, it is a Centuries old fraternal order intended to be a shared struggle amongst kindred soles about perfecting the highest-level humanity and personal character, as a man — that which as “a whole” can be perceived as “many shades of gray” in the judgmental eyes of others.

What I call lightheartedly, but respectfully, as an outsider, the Freemason MMA” — the MMA standing for “Mixed Masonic Arts.”

In that we as human beings are each of us, a perfect existence of human imperfection. A dichotomy the Chinese sages call the Ying & Yang.

Therefore, the recognition of our dichotomy and to journey to perfect one’s character becomes not exclusive to any historical age of enlightenment, person, culture or religion or much less, a single secret society or fraternal order, like Freemasonry.

Taking on such a journey of self-realization one can recognize the danger in Freemasonry, right off. The uncertainty of success, the unforeseeable cost to unveil and work to fulfill your higher purpose made necessary to be the man you always want to be, that is — The Veiled Threat of Freemasonry.

WE’VE TOLD DEMOCRAPS TO, “BE CAREFULL WHAT YOU WISH FOR”…NOW YOU’RE “GONNA” GET WHAT YOU ASKED FOR AND DESERVE…!
WHY YOU COULD GET SICK OR DIE IF YOU RELY ON PURELL TO PROTECT YOU
Comment