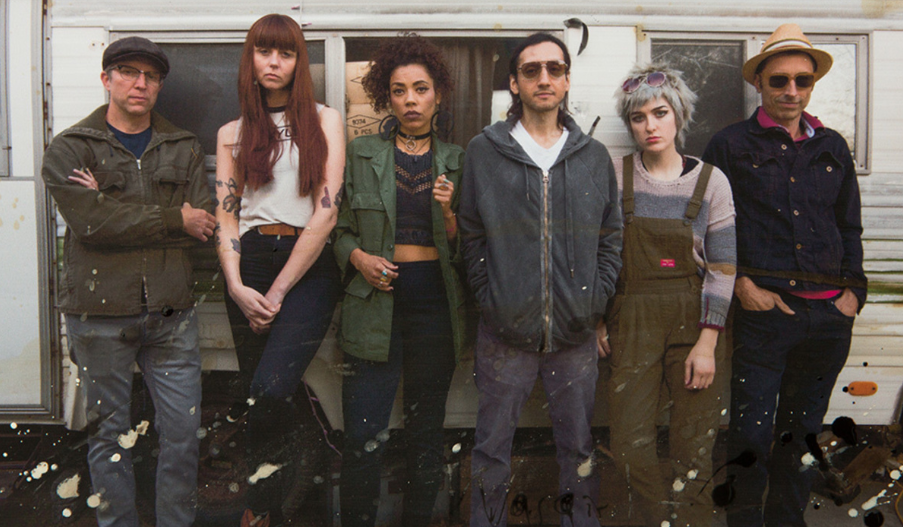 “… an album that boosts the blood flow. Coursing through vintage garage-rock, post-punk, Afro-beat, girl-group pop, psych-funk and dance music, “Wargirl” is both powerful and empowering, raw and real. Put it on with cool kids like Nick Waterhouse, Dexter Story and Claude Fontaine and prepare to sweat a little.”- Buzzbands.LA

“Possesses a cinematic quality that’s been missing from music since the seventies. Blending sixties psychedelia together with seventies funk until it is oh, so smooth…could have been lifted from a key scene in almost any early James Bond thriller…”- Worleygig

“Mixing everything from afrobeat, Latin-tinted guitar offerings, and a healthy dose of funk, (Wargirl) slips and leaps in an eclectic batch of grooves. And the video takes all those intersecting feelings and dips them into the color-blocked silhouettes and streaks of color of a 70s stylized nature.”- Grimy Goods

“This is a band that explores music like no other…”How You Feel” is funk rock in a nostalgic nod to 60’s California.”- Earmilk

“The album has a spiritual jive feel with notes reminiscent of sixties go-go funk, making it impossible not to shimmy along to. Their lyrics are also impactful covering both personal matters and making a social commentary of what’s currently happening in our country.”- OC Weekly

“(“Mess Around”) serves as testament to the band’s musical might: fierce grooves, unapologetic attitude, and the ability to create hooks that are sensible and impossible to forget.”- PopMatters

“…the band’s feral take on indie rock surprises at every turn.”- Clash

“Pondering on the music of America’s west coast conjures up thoughts of The Beach Boys, Laurel Canyon and the hippy scene around San Francisco. Wargirl combine all of these and more into a potent mix that feels rooted in the contemporary despite leaving its heart in the 1970s.”- When The Horn Blows

“Wignall’s tastes run the gamut, from old-school garage-rock to post-punk to Afro-beat to psychedelic funk to dance music. All of those flavors take a turn on the palate in the personal and political empowerment anthems on “WARGIRL””- Buzzbands

Led by singer Samantha Park (daughter of James Lafayette Parks, the leader of the 70s funk band Bull & The Matadors), WARGIRL’s lineup is rounded out by bassist Tamara Raye (who plays in a way that grooves like Tina Weymouth of Talking Heads/Tom Tom Club), keyboardist Enya Preston, dual percussionists Erick Diego Nieto and Jeff Suri, and Wignall on guitar.

Think Santana’s early records, afrobeat recordings by Fela Kuti, the psychedelic masterpiece “Forever Changes” by Love and sounds from 70s psych funk masters War (who happen to also be from Long Beach) and mix that with element of reggae, disco, garage rock and post-punk and you’ll start to understand where WARGIRL is coming from.

Whilst nearby Los Angeles is where dreams are shattered, in Long Beach people are getting on with their lives. It’s got a strong working-class community and is known for its ethnic diversity – even delights in it. Add to that the sunshine and the almost nice beach. “Really,” Matt Wignall says, “Long Beach is kind of the opposite of LA, it’s a very real place where you can actually become a part of the creative community” Wignall has been there his whole life, it’s where he runs a studio and seeks out old equipment to repair. He prides himself in making it sound better than it ever did before. He produces bands, such as Cold War Kids. With them, Wignall has recorded tracks such as “Hang Me Out to Dry” and “Hospital Beds” with a sound that is to die for. Also there’s Mando Diao, whose album “GiveMeFire!” he co-produced, engineered and even created the artwork for. So the interesting question is: Why does a musician who has such an understanding of sound and such awesome equipment not have his own band?

And now he has got one: WARGIRL. After brilliant first gigs, including an appearance at Germany’s Clouds Hill Festival, and the release of debut their fantastic debut EP “Arbolita”, Clouds Hill out of Hamburg (Omar Rodriguez, Pete Doherty) is now releasing the band’s first album, eponymously named WARGIRL.

“The idea of being in some band where there’s four guys playing and one of them singing lead just seemed incredibly boring to me,” Wignall says. What he wanted was an awesome collective that would do justice to the sound of his hometown. The Sound of Long Beach, that means Santana’s early records, afrobeat recordings by Fela Kuti, the psychedelic masterpiece “Forever Changes” by Love, the 70s psych funk masters War (who happen to also be from Long Beach!), as well as reggae, disco, garage rock and post-punk. “One day the thought occurred to me that really what I should do was to get to know people and set up a band with them that would combine all of these aspects.” So he went out, into town, down to the beach – and realised: Actually, I already know all of these people, I just need to ask them.

The singer is Samantha Park. She is the daughter of James Lafayette Parks, the leader of the 70s funk band Bull & The Matadors, but above all she is a gifted vocalist who manages both to sing sensually and to drive the sound forwards. Tamara Raye plays bass in a way that is unusually demanding and that grooves like Tina Weymouth’s (of Talking Heads and Tom Tom Club). Enya Preston plays the keyboards. There are also, very importantly, two percussionists: Erick Diego Nieto and Jeff Suri blend disco with funk, latin with afro, pop with rock – but always to the point, never just to show off. Matt Wignall plays guitar, “not at all as a lead instrument but as an additional driver.”

This team recorded the tracks on WARGIRL live apart from a very few overdubs. “We sit around in a circle, without headphones, look each other in the eyes and try to feel the music,” Wignall explains. They play for the moment, not for the recording. And that is exactly what makes their music special. Some of the tracks were recorded in Costa Rica, with Mats Bjo?rke of Mando Diaopresent and helping. On location was also a horn section made up entirely of women musicians. “I like the feminine touch in our music,” Wignall says.

The basis of the songs is usually the beat: sometimes it sounds like post-punk disco as in the single “Poison”; sometimes as in “How You Feel” it’s like Phil Spector in a California funk club. In “Last Time” the rhythm has a mysterious and tropical vibe whilst “Voice Of The Mountain” is in a wonderful way both African American and Latin American, which, although they are not mutually exclusive, is quite a feat to pull off.

“Our thinking is completely without borders,” Wignall states. The role model is records like The Clash’s album “Sandinista!”: The real legacy of punk is not the image and slogans but the certainty that you can play whatever you want.

“No matter whether you see us or hear us, we always come across as a diverse bunch: ethnically as well as in terms of gender and preferences. However, whilst this may be considered colourful elsewhere, in Long Beach it is totally normal,” Matt Wignall points out. “Nobody else sounds like us, and yet we sound like the environment we come from.” WARGIRL is thus also an appeal for diversity and openness, for identity within heterogeneity. It is therefore an album the world today sorely needs. Because diverse doesn’t just look better – it also sounds better.