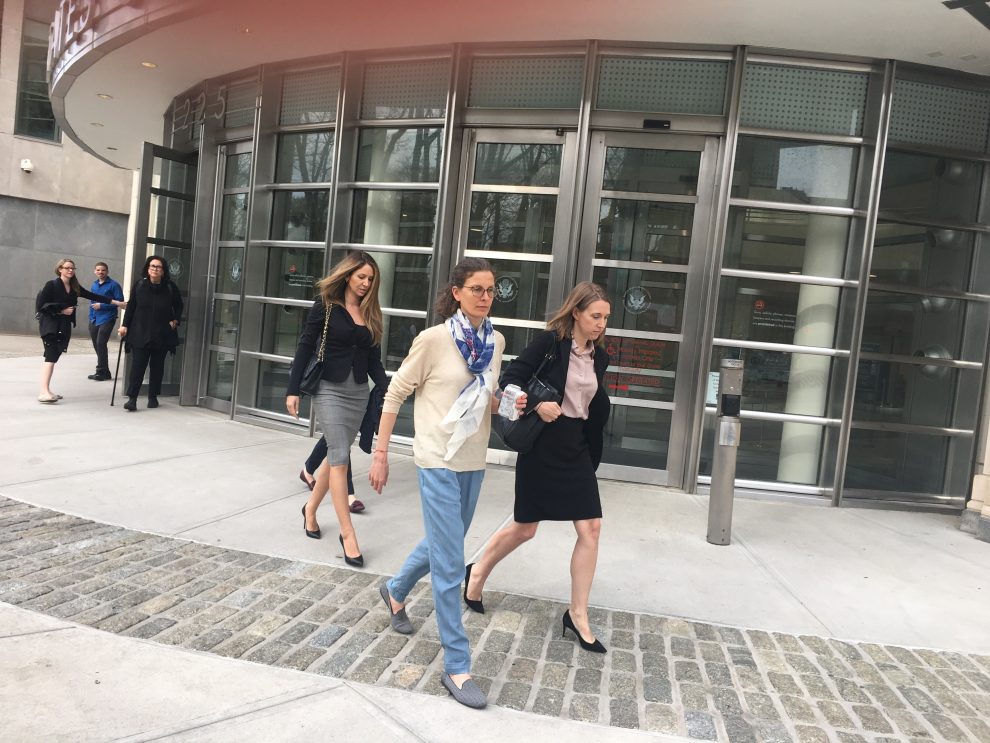 If anybody wants to understand the US criminal justice system check this out.

Clare Bronfman, director of operations for NXIVM – which the president of the enterprise, Nancy Salzman, has already admitted was a racketeering enterprise, will face the lightest of sentences when she goes before Judge Nicholas Garaufis for sentencing on July 25.

Isn’t it great to have money?

Clare Bronfman was wearing the same outfit she wore many times in court.

She was dressed in a tan shirt, and billowy light blue pants. She wore a gray and blue scarf printed with elephants that I don’t recall seeing her wear before.

She had the same kind of hairstyle, just pulled back in the front end and hanging down in the back.

Before the hearing, which was at 4 pm, she and her lawyers were in the courthouse cafeteria.  Then they went to the courtroom, Clare sat hunched over in her chair while waiting for the judge.  She may have naturally poor posture, but certainly she was sitting kind of hunched over.  Her pointy shoulders were sticking out of her shirt.

She spent most of the time chatting with a female lawyer who had dark blonde or light brown shoulder length hair.  Her lead attorney, Mark Geragos, was on his phone for part of the time while waiting for the judge to arrive.  Clare was facing away from him speaking to the other lawyer.

At some point, Geragos put away the phone and all three lawyers chatted. Clare looked like a combination of a haggard woman and a lost little girl.

She pleaded guilty to to two felonies. The first count was conspiracy to conceal or harbor an illegal alien for financial gain and the second count was fraudulent use of identification.

The judge said, “I have an important question. Are there any promises not in this agreement?” Clare said “no.”

The judge said the sentences can run consecutively or concurrently.

The judge said the sentencing guidelines were between 21 to 27 months. And that the only way she can appeal is if she gets sentenced to more than 27 months.

The government said Clare would pay $6 million in lieu of forfeiture of real property, and it must be paid within 60 days.  In addition, Clare will pay restitution of $96,605. 25  to Jane Doe #2.

At some point, there was discussion about the name and credit card of Jane Doe #7 whom the government alleged Clare misused.

Clare made her allocution which was much shorter than Allison’s or Lauren’s. She spoke so softly it was extremely hard to hear.

During her allocution, Clare cried softly at first and said that, “Your honor, I was afforded a great gift from my grandfather and father but that privilege … does not come with the ability to break the law … It comes with a greater responsibility to uphold the law.”

She admitted she “did harbor an individual” who she helped “live and work in our country in a way that would be undetectable.”

After court, there was a gaggle of photographers waiting for Clare’s exit. Clare walked alone ahead of her attorneys. Geragos was behind her.

He told the media, “If you don’t chase Clare, I will make a statement.”

He told reporters he was gratified that the racketeering charges have been dismissed against his client.

So there you have it – No RICO charge. Clare Bronfman bought her way out.

As far as sentencing, she may not be sentenced to anything prison at all.

As for Jane Doe #7 – this was the late Pam Cafritz.

According to a report in the New York Times, Bronfman told the judge, “I am truly remorseful. I wanted to do good in the world.”

A prosecutor, Moira Penza, told the court on Friday that Ms. Bronfman had made a false statement to the government about an undocumented immigrant who provided “labor and service” for herself and Nxivm. Ms. Bronfman had also made it possible for Mr. Raniere to use a credit card belonging to someone who had died, Ms. Penza said.

Clare said at her allocution that she was “afforded a great gift from my grandfather and father but that privilege … does not come with the ability to break the law … It comes with a greater responsibility to uphold the law.”

What she forgot to mention is that with the gift she got from her father and grandfather, it also gave her a greater ability to buy off the law, to break many laws and get away with it.

Today, the DOJ proved that money may not be able to buy everything – but can buy jurtice from them. There is a two tiered system of justice in America – one for the wealthy and another for the rest of us. We saw it on display today.

The government snags $6 million for themselves for restitution and less than $100,000 for her victim. Nice going.

By the way, kudos to Mark Geragos. He certainly earned his fee today. Geragos said Clare did not sign a cooperation agreement. She didn’t have to, of course. Not her.

Finally, in less than two years – maybe sooner – we will see the return of Clare Bronfman. It remains to be seen if she will be seeking vengeance on those who put her to this inconvenience.

We will have more on this later tonight. Next up Kathy Russell.

Kathy Russell takes plea deal – faces six to 12 months
MR. PRESIDENT…REPUBLICANS HAVE THE OPPORTUNITY TO DRIVE A WOODEN STAKE THROUGH THE HEART OF THE “DEMOCRAP “ PARTY…DO IT, I’LL POUND THE STAKE!!!!!