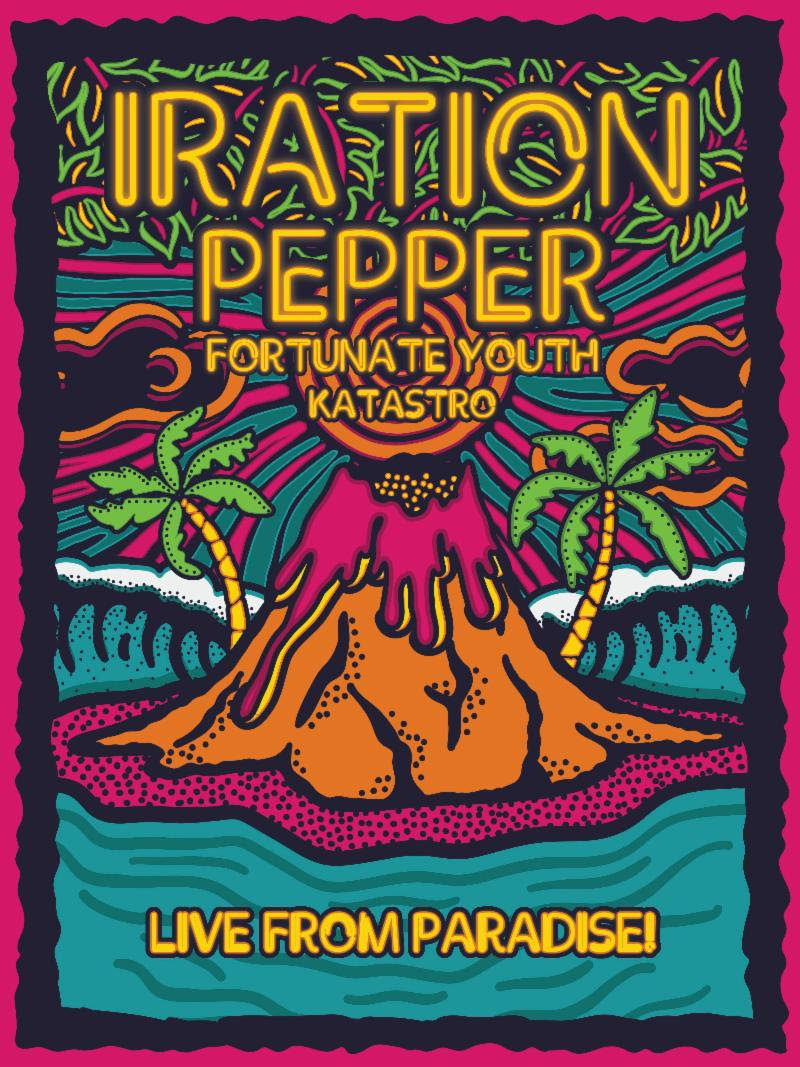 Reggae-influenced alternative rock band Iration officially kicks off their “Live From Paradise!” tour tonight in Albuquerque, NM, bringing the aloha spirit and good vibes across the country this spring and summer. The 43-date outing, featuring special guests Pepper, Fortunate Youth and Katastro, marks the group’s largest tour to date since their formation nearly 15 years ago.
Of the tour, guitarist Micah Brown recently explained to Billboard.com, “Every night we create a little bit of paradise for the people that are coming to the show. Live From Paradise was kind of a tongue-in-cheek term where every night, wherever you are, it’s your paradise. It is a positive healthy way of looking at life.”
The upcoming shows will feature a mix of hits and rarities off Iration’s six studio albums, including their most recent self-titled release from 2018 (Three Prong Records). Lead vocalist and guitarist Micah Pueschel described the Iration album to Billboard as “extremely eclectic” and added, “we do a lot of different things and we try to make good songs. We don’t really care what genre it is or if it fits into one kind of bag.” As Billboard‘s Taylor Mims pointed out, “the album stretches out for more than an hour without ever losing its captivating reggae-tinged vibes, which makes it an ideal accompaniment for the list of outdoor stages they’ll headline this summer.”
In anticipation of the “Live From Paradise!” launch, the Hawaiian-bred, California-based band (Micah Pueschel [lead vocals/guitar], Adam Taylor [bass], Joe Dickens [drums], Cayson Peterson[keyboards], Micah Brown [guitar/vocals] plus touring member Drake Peterson [trumpet]) dropped a new music video last week for the Iration track “Stay The Course,” which digs into the band’s personal archives to depict their career evolution and growth. “‘Stay The Course’ is a song about perseverance and believing in yourself even when you feel down or alone,” shares Iration. “It’s about finding the greatness that you possess inside of you and nurturing it. The video is a time piece for the band and tells the story of our journey from garage band to where we are now.”
“Live From Paradise!” brings Iration and friends to Austin, Dallas, New Orleans, St. Petersburg, Charlotte, Asbury Park, Cincinnati, Detroit, Milwaukee and Kansas City, among many others this April and May. The summer run then commences July 11th in Oklahoma City and stops in such markets as Minneapolis, Chicago, Philadelphia, New York City (July 19th at The Rooftop at Pier 17), Boston, Baltimore, Raleigh, Houston, Irvine (August 2nd at FivePoint Amphitheatre), Sacramento, Boise and Las Vegas, before wrapping in Iration’s Santa Barbara hometown August 25th for their first official headlining show at the Santa Barbara Bowl. Additionally, Irationperforms at Red Rocks Amphitheatre on May 23rd for a special headlining show with special guests UB40 featuring Ali Campbell & Astro, Toots and the Maytals, Fortunate Youth and more for their first time topping the lineup at the legendary Colorado venue.
IRATION TOUR DATES