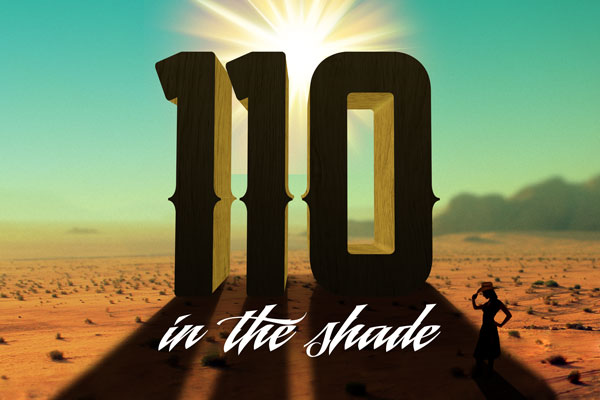 San Francisco’s 42nd Street Moon (Daren A.C. Carollo and Daniel Thomas, Co-Executive Directors) has announced the full cast and creative team for Moon’s next production, the 8-Time Tony Award-nominated musical 110 IN THE SHADE.  Based N. Richard Nash’s acclaimed 1954 play THE RAINMAKER (the basis for the 1956 film starring Burt Lancaster and Katharine Hepburn), 110 IN THE SHADE features music by Harvey Schmidt and lyrics by Tom Jones (THE FANTASTICKS), and a book by Nash adapted from his own play. 42nd Street Moon’s production of 110 IN THE SHADE runs from April 24 – May 12, 2019 and will perform at San Francisco’s Gateway Theatre (215 Jackson St, San Francisco, CA 94111). The press opening will take place on Saturday, April 27 at 6:00 p.m. Tickets range from $30 – $75 and can be purchased through the Box Office at (415) 255-8207 or online at www.42ndstmoon.org.
42nd Street Moon’s production of 110 IN THE SHADE will be directed by Josh Marx and choreographed by Scottie Watson, with Music Direction by Dave Dobrusky.
The principal cast of 110 IN THE SHADE will feature Jillian Bader as “Olive Barrow,” Jesse Caldwell* as “H.C. Curry,” Juan Castro as “Bo Dollivon,” Andrea Dennison-Laufer as “Lizzie Curry,” Elliott Hanson as “Jimmy Curry,” Kyra Lynn Kozlenko* as “Snookie Updegraff,” Cameron LaBrie as “Phil Mackey,” Anne Norland as “Sammie-Sue Miller,” Danielle Philapil as “Hanna Curtis,” Keith Pinto* as “Starbuck,” Benjamin Pither* as “Joe Copeland,” Danny Quezada as “George Curtis,” Clio Salzer as “Belinda Copeland,” James Schott as “Noah Curry,” Donna Jeanne Turner as “Beverly Copeland” and Brian Watson* as “File.”
In addition to Messrs. Marx, Watson and Dobrusky, the creative team will include Brian Watson as Scenic Designer, Michael Palumbo as Lighting Designer, Bethany Deal as Costume Designer, Lauren Howry* as Assistant Stage Manager and Alicia Lerner* as Stage Manager.
*Member of Actors’ Equity Association, the union of professional actors and stage managers.
At turns introspective, romantic, and joyously hopeful, 110 IN THE SHADE is a poignant look at romance in a drought-stricken Depression-era town. Sharp-witted but insecure, rancher’s daughter Lizzie is resolving herself to live out life as a spinster until charming stranger Starbuck comes to town with the promise to make it rain, encouraging Lizzie to dream beyond her own view of herself. Meanwhile, the town Sheriff must deal with the con man as well as coming to terms with his own past. This beautiful show boasts a score by Harvey Schmidt and Tom Jones (best known for the longest-running musical in history, THE FANTASTICKS).
“It is such a privilege to be able to tell the incredible story of 110 IN THE SHADE,” said Director Josh Marx. “Not only is this a story about enduring hope through trying times, but it also talks about finding beauty in unconventional places – and what it means to in fact ‘be beautiful’. The cast and designers for this project are absolutely stellar, and we are geared up for this to be a truly remarkable experience and an incredible show.”
110 IN THE SHADE runs about two hours and thirty minutes, including one intermission.
42nd Street Moon’s 2018-2019 season will continue with the Bay Area Regional Premiere of the Tony Award-winning Best Musical ONCE(June 12 – 30, 2019), followed by THE OLDEST LIVING CATER WAITER (performances begin June 23, 2019). The upcoming 2019-2020 season will include full productions of HOT MIKADO (September 25 – October 13, 2019), SCROOGE IN LOVE! (Back by popular demand, December 4 – 23, 2019), A GENTLEMAN’S GUIDE TO LOVE AND MURDER (February 26 – March 15, 2020), THE PAJAMA GAME (April 15 – May 3, 2020),MERRILY WE ROLL ALONG (the 1981 Musical) (May 13 – June 14, 2020) and MERRILY WE ROLL ALONG (the 1934 Play) (May 20 – June 23, 2020). The 2019-2020 season will also include TITANIC THE MUSICAL In Concert (September 7 and 8, 2019) and the inauguration of two ambitious new programs: the BACK-TO-BACK SERIES and THE SONDHEIM SWEEP.