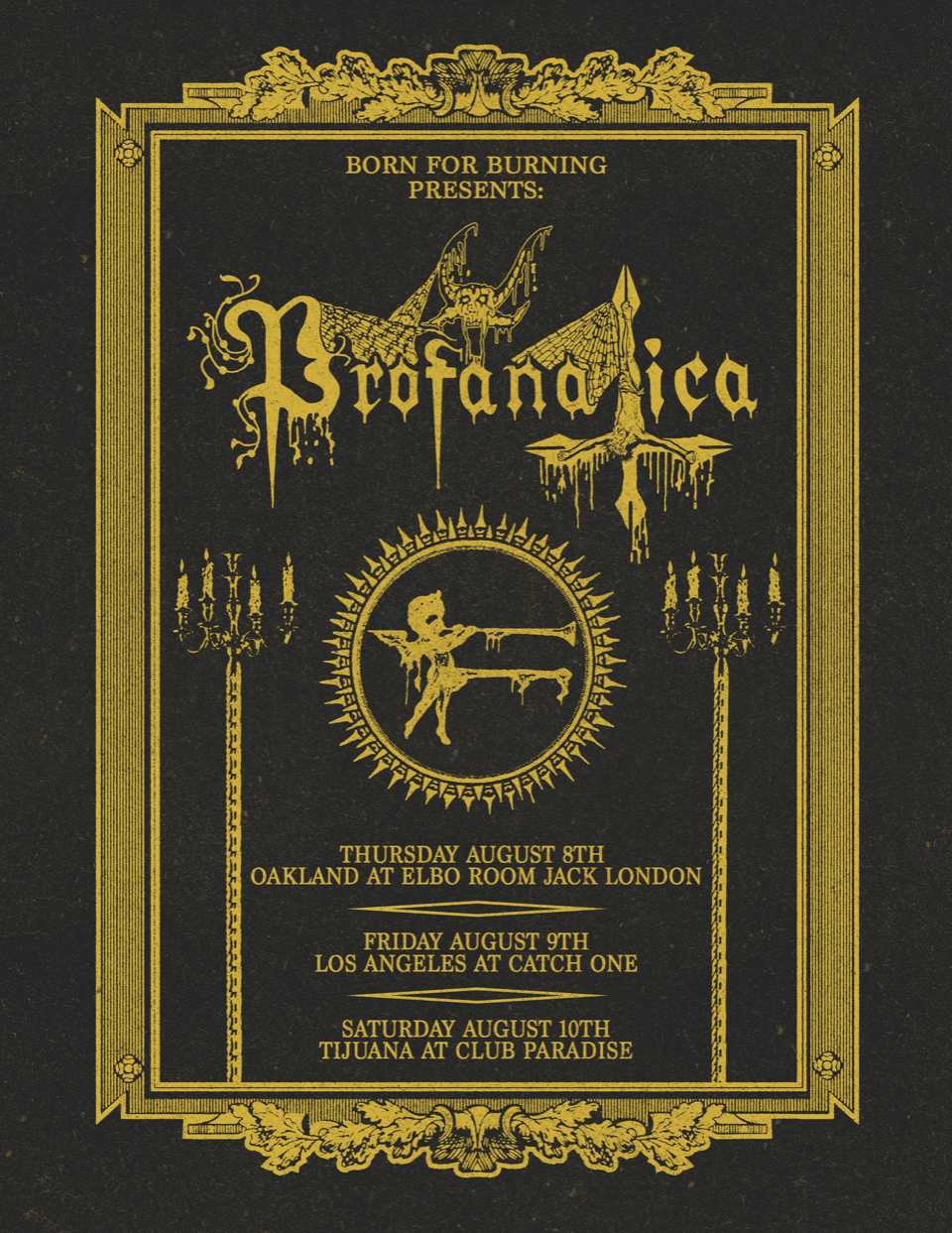 Blasphemous black metal legion PROFANATICA will be embarking on a small run of U.S. tour dates this summer. The band will perform three shows in Oakland, CA, Los Angeles, CA, and Tijuana. In addition to these newly announced dates, the band will also be headlining the final date of this year’s Blood of the Wolf Fest in Lexington, KY.

In 1990, Aragon Amori, Paul Ledney, and Brett Makowski departed INCANTATION due to artistic differences. This departure led to the birth of PROFANATICA. Influenced by such classic cults as VENOM, NECROVORE, SARCOFAGO and BATHORY, the unholy trinity together had a passion to create raw and sacrilegious Black Metal.

Upon the release of their first two demo tapes, PROFANATICA received their first record deal with After World Records. In 1991, they released their infamous, limited edition ‘Weeping In Heaven’ 7″ EP. The following year, the band signed a deal with the French Osmose Productions (a fairly new and uprising label at the time) to release the ‘Tormenting Holy Flesh’ split 12″ LP/CD with the Colombian band MASACRE.

During this time, PROFANATICA extensively toured the Northeastern United States, often shocking many with their sick and blasphemous live act. As the end of the year approached, Makowski and fill-in John Gelso (ex-TOTEN) departed, so Ledney and Amori invited their close comrade, DEMONCY’s Wicked Warlock of Demonic Blasphemy (these days known as Ixithra) to perform the guitar work. After playing one gig together, they hit the studio to record their first full-length. Initially entitled “The Raping Of The Virgin Mary,” the master tapes of these recordings were unfortunately destroyed in the studio (there are conflicting stories about this), and the band parted ways quickly after.

Between 1993-2001, PROFANATICA was inactive as the members focused on other projects. By early 2001, Ledney recruited two new members and resurrected the black cult of PROFANATICA. Ledney soon released on his own label, Necroscope Productions, and the “Live” CD consisting of three PROFANATICA performances from 1991-1992. That same year, the now-defunct War Hammer Records released the “Collection” on CD and a 12″ Picture Disc edition under Necroscope Productions soon followed. Shortly after, the band had recorded two brand new blasphemies and released the “Broken Jew/Fuck the Messiah” 7″ EP on Metal War Productions in 2002.

By 2006 the black cult forged a pact with Hells Headbangers Records and ejaculated “The Enemy of Virtue” 12″ LP. The response to the LP set was immense and quickly sold out in 2,000 copies with various collectable editions.

2007 was a groundbreaking year; the band unleashed their much awaited & overdue debut full-length studio album entitled ‘Profanatitas De Domonatia’ which was followed up by ‘The Enemy of Virtue.’

Early 2008 saw the release of the band’s first ever DVD documenting the shocking & legendary PROFANATICA performances throughout the early 90’s in the Northeastern United States. This double DVD set, presented by Deathgasm & Negative Existence Records, was also entitled “The Enemy of Virtue” and featured a controversial and much gossiped 1992 interview. A few months later, Gasmask Productions in France featured two new PROFANATICA songs on the vinyl only “Trampling the Holy Faith” 4-way split LP with NUCLEAR DESECRATION, UNHOLY CRUCIFIX, and GOATSODOMY.

Up to this point, live activity had ceased for nearly seven years until the black cult crushed the stage in the scorching hell of Texas at the “Sacrifice of the Nazarene Child Fest IX” on June 21, 2008. Despite some drama surrounding this performance, the band’s reeking black filth destroyed the crowd.

Come 2010 the band had reached their 20th year anniversary. By that February, Hells Headbangers released the glorious “The Grand Masters Session” triple 8″ Box Set. Desecration of God Productions unearthed an even older rehearsal session from 1990/1991 entitled “The Years of Pestilence” on 7″ EP and by Novisible Scars on Cassette with bonus tracks.

In 2010, the time was right to unleash the band’s highly anticipated second album “Disgusting Blasphemies Against God.” With this new signing to Season of Mist, PROFANATICA is rife with creative fury, ready to unleash a new chapter of blasphemy onto the masses.