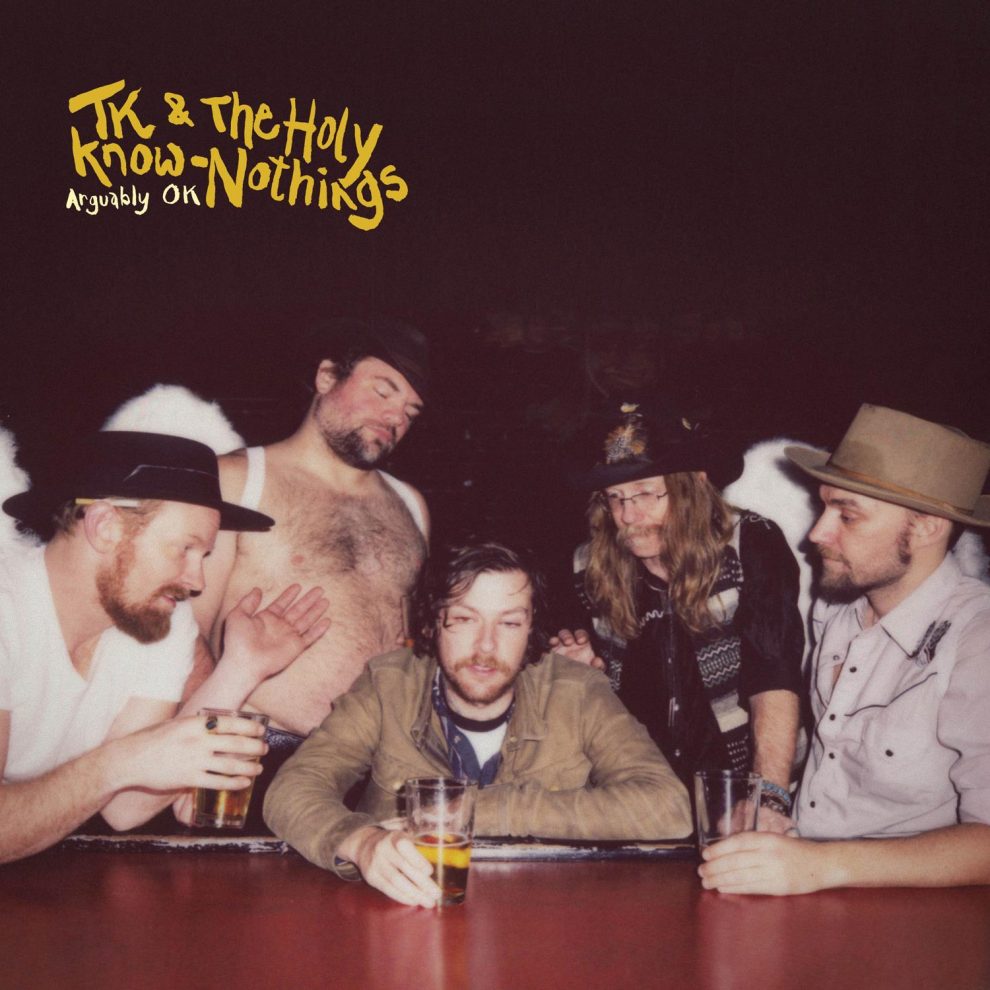 American Songwriter has the full stream of TK & The Holy Know Nothings’ Arguably OK ahead of its release on Mama Bird Recording Co. this Friday. The songs on Arguably OK are about dead ends, addiction, self-sabotaged relationships, drug trips gone bad (or good? or both?), and, above all, holding out for the real thing. Taylor Kingman’s lyrics are tightly crafted and profoundly paradoxical; simultaneously self-deprecating and unapologetic, clever and crass, irreverent and tender; and sometimes riotously funny. Each song takes you somewhere unexpected, every phrase crafted with the same signature combination of dirtbag revelry and haltingly poignant poetry.

The undeniably catchy last single, “Desert Rose”, launches into a classic boogie rock choogler with Taylor Kingman’s pleading, sharp vocals leading the failed-love-song into psychedelic territory after the final refrain of “I found heaven / and then I bottled it.” Speaking to the track, Kingman says,

“If you pluck a flower from the ground, it will die. If you put a bird in a cage, it won’t be able to fly. If you rhyme die with fly, you sound like an idiot. Life cannot be contained and love is not possession. I have made that mistake many times.”

TK & The Holy Know-Nothings previously announced their debut album with the first single, “Emmanuel”, which was lauded by Wide Open Country, while Thomas Mooney says there’s “a Deer Tick quality to the fuzzed out country rock TK & The Holy Know-Nothings are pumping out.” It was quickly followed up with “Tunnel of a Dream” at OPB Music who say it is “so twangy and beautifully frayed… Kingman’s voice sounds like it could rip through a 200 foot tall Douglas fir.” Taylor Kingman describes “Tunnel of a Dream” as “a kaleidoscopic time loop tracing the journey from comfort’s starry-eyed, womb-wrapped bliss to curiosity’s waking consequence and death’s merciful opening into the maze of the mind.”

TK & The Holy Know-Nothings is Portland songwriter Taylor Kingman’s new affectionately self-described “psychedelic doom boogie” band featuring Jay Cobb Anderson, Lewi Longmire, Sydney Nash and Tyler Thompson. Arguably OK was recorded in three days in Enterprise, Oregon, a quiet cowboy town at the foot of the majestic Wallowa Mountains. It was made live, with no overdubs, by way of whole album run-throughs on stage at the historic OK Theatre, where most of their budget was spent on keeping the heat on. This is not a live album, but the raw energy of the recording style comes across perfectly on the unreservedly honest dependency anthem “Emmanuel”. Speaking to the track, Kingman says,

“Generally speaking, I find that folks can be described as being either automatics or manuals when it comes to how they get through the day-to-day. An automatic wakes up when the sun comes up, goes to sleep when the sun goes down, has an appetite when they should, etc. Manuals, on the other hand, need to goose all of these activities with various chemicals. I have always fallen into the manual category.”

TK & The Holy Know-Nothings was borne out of frontman Taylor Kingman’s desire to create a loose, groove-heavy bar band, but never at the expense of good, honest songwriting. To do so, Kingman pulled together his dream lineup, consisting of drummer Tyler Thompson and multi-instrumentalists Jay Cobb Anderson (lead guitar, harmonica), Lewi Longmire (bass, guitar, pedal steel, flugelhorn) and Sydney Nash (keys, bass, slide guitar, cornet). It’s a band of deeply contrasting styles buoyed by a palpable mutual trust–one that allows them to find and lose the groove with the same ease. They build graceful, spaced-out landscapes around Kingman’s storytelling–his voice ragged and broken one moment and raging the next–only to deconstruct them through a fit of manic and often dissonant rabbit holes. They’ve created irreverent rock and roll where nothing is sacred because everything is sacred. Theirs is a sound they’ve lovingly dubbed “psychedelic doom boogie” with a groove that’s tempered and deepened by Kingman’s stubborn devotion to the unglorified truth of things.