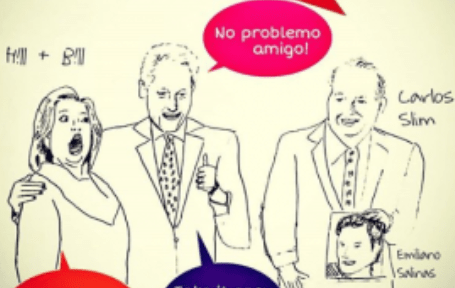 Carlos Slim Helú , 79, is the fifth-richest person in the world, according to Forbes’ listing of The World’s Billionaires, with him and his family having a net worth estimated at $63.1 billion.

He derived his fortune from his holdings in a number of Mexican companies through his conglomerate, Grupo Carso.

And Frank Report received correspondence this week from none other than the Corporate Communication Manager of Grupo Carso – Renato Flores Cartas, who wrote to inform me and my associate editor, Joseph O’Hara, that a story I had written was incorrect.

That story is Source: Billionaire Carlos Slim trying to buy off Emiliano Salinas’ indictment via Clinton.

In that story, published in Sept. 2018, which Slim’s spokesman says is ‘fake news’, I reported that a source said, “Discussions are ongoing between the Carlos Slim Foundation and the Clinton Foundation about a multi-million dollar payment … a back-room deal to buy away the threatened indictment of Emiliano Salinas by U.S. DOJ prosecutors in the NXIVM criminal racketeering case”.

My source went on to say, “One of the points of contention in the discussions is  – if the donation is made to the Clinton Foundation by Slim  – can the Clintons deliver enough influence peddling to guarantee the indictment will be withheld? It is unknown what $$ amount may be in play or may have already changed hands between the Slim Foundation and the Clinton Foundation regarding this matter.”
***
It is a matter of record that Emiliano Salinas has been named as a criminal coconspirator of Keith Raniere in the trial of Raniere, but Salinas was not indicted.
During the trial, [on May 14] lead prosecutor, Assistant US Attorney Moira Kim Penza made a flat-out declaration about Emiliano Salinas’ criminality. She said, “So one of the email accounts appears to have been created by Emiliano Salinas, who the government alleges, is a coconspirator.”
***
Regardless of whether Emiliano is a criminal or whether he will ever be charged, Carlos Slim’s spokesperson says that my report about the billionaire’s intervention with the Clintons to save Emiliano is pure bunk, is “fake news.”
Here is precisely what Renato Flores Cartas wrote to me:

I am writing to you about your information “Source: Billionaire Carlos Slim trying to buy off Emiliano Salinas’ indictment via Clinton”.

All references in this information about Mr. Carlos Slim is absolutely false, based solely on speculation and we were never been consulted previously, according to the minimum journalistic standards.

Relations between Carlos Slim Foundation and Clinton Foundation start since 2008. On this year, bout Institution and the Canadian businessman, Frank Giustra, created a Found to social investment in México, Colombia and Peru, the resources never have a United States as destination.

According with this information we ask you the full clarification in your website of this of that fake news.

It is, of course, well known that Carlos Slim got his big leap forward in wealth-building from his mentor, godfather and friend, former Mexican President Carlos Salinas, who some say is even richer than Slim – though you won’t see Salinas mentioned in Forbes.

And Carlos Salinas is Emiliano’s father, which makes Carlos Slim sort of an uncle to Emiliano.

According to our sources, Slim did meet with former US President Bill Clinton in Mexico in March 2018, just days before Keith Raniere was arrested in Mexico.

The upshot is, – and this is my clarification – as requested – there is no evidence of a bid by either Slim – who is the richest person in Mexico – or by the former Mexican President Salinas to buy the support of the Clintons to possibly save his son from indictment for his role in the Nxivm cult, despite damaging statements about the son’s involvement by prosecutors in the case.

However, as I previously reported, a high ranking US governmental source insists there was such an effort to buy the son’s protection and Slim, in response to my story, denies the effort ever took place.

A Misunderstanding of Emails

Slim’s spokesperson, Renato Flores Cartas sent both Joe O’Hara and myself the email quoted above [Joe is listed on our website as associate editor]. Somehow Joe thought that I forwarded Renato Flores Cartas’ email to him [instead of getting it directly from Slim’s communication manager).

Joe wrote, intending this [humorous] message for me: “I strongly suggest you avoid Mexican restaurants for the foreseeable future.”

Unfortunately he sent this message accidentally to Renato.

Receiving it, Renato was not amused, nor would I expect him to be.

Renato replied: “I strongly suggest you thoroughly review the information I sent you and do not take it lightly.”

A source close to Slim, and who knows Salinas, said that Slim and Salinas have different ways of handling things such as this.

He said, “Carlos Slim Helu [“Ca?los ez?lim e?lu,” as he pronounces it] has a phalanx of lawyers who will gladly sue you  – [on hourly retainer] but he is kindly disposed and will not take your life.

“As for Carlos Salinas de Gortari”, my source added, “He is more matter of fact businessman. If he perceives you as a threat, he will assassinate you. This may appear to be an accident.”

This latter judgement of Salinas is backed by many, many people in Mexico. Indeed, one leading journalist told me with the straightest of faces that should Carlos Salinas find out about a certain story he was writing – with me as his source – his future would be grim, quite bleak and likely non existent – and until publication of the story he swore me to secrecy. A condition I upheld until he published the story.

Carlos Salinas dances at a party [center, light blue shirt]. His son Emiliano is also dancing [left in sunglasses]. It is nice to see Carlos relaxing with friends. It is said he has a high turnover in friends. One day he meets a guy and then he never sees him again.