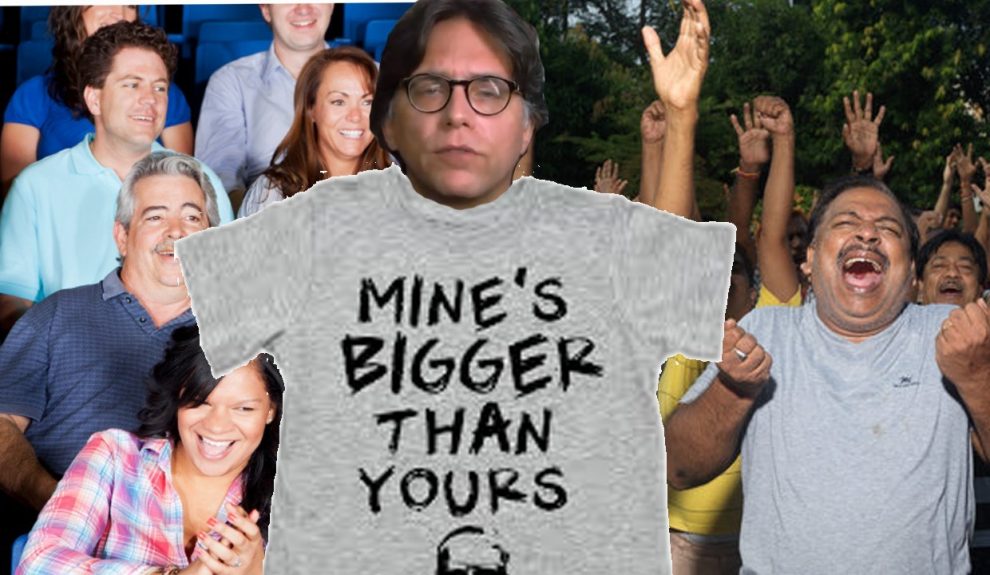 The government said today that it plans to conclude its case by the end of next week or the beginning of the following week.[ i.e.: somewhere between June 14 and June 18th.]

It is not known if Keith Raniere will put on a defense. The defense has the option of deciding that at the very moment the prosecution rests its case.

As for Raniere’s defense, the judge previously ruled that his witnesses have to appear live. He denied his motion to allow witnesses in Mexico to appear via closed-circuit television.

The million dollar question is whether Raniere will testify.

Tomorrow, expert witness Dr. Dawn  Hughes, a psychologist, testifies about victims of sexual abuse. Then Nicole, the DOS slave, a 31-year-old actress, who said she was blindfolded and tied down by Keith Raniere and subjected to unwanted oral sex by an unknown woman [later identified as Cami] will testify.

Now, on to today’s testimony:

Some of it was tedious but we had a few gems.

He also wants her to write a complete life vow and keeps asking her if she finished it. Somehow, it was never good enough.  He wants her to give herself totally, like “no other woman in history.”

Cami vows to be his forever and always have his back and obey Him.

But that’s not good enough. He says, “obey me totally?”

Cami says, “you’re pushing too much.”  Finally, she gives in.

She writes “Okay, I totally have you as my master in all things.”

Keith says, “Still I can’t trust you. I need extreme collateral and different kinds of punishment for bad behavior.”

It turns out, he’s still upset, deeply jealous of Robbie [designated ‘R” in the messages] who Cami apparently had sex with.

STOP READING IF YOU LOVE YOUR VANGUARD

Now, for the squeamish, it is time to stop reading. For those who love and adore their Vanguard – the following might adversely affect your internal representation of him. Stop reading now.

Keith asked Cami, “Do you like his fluid [semen] more than mine?”

Cami is kind of a down to earth person in a lot of ways.

Keith wants to know, “Did you tell him you liked the taste of his semen’?”

He keeps asking more questions. He wanted her to compare sex with Robbie to sex with him.

He wants to know who’s “longer.”

Cami said, “Why does this matter?’

Keith said he knows Robbie’s penis is smaller than his.

Keith says his penis is 7.5 inches fully erect and Robbie’s is 6.75 inches.

Camus says [quite brutally] “It’s been a long time since you were ‘fully erect.'”

As for Keith, he was red as a beet.

Keith goes on – decrying how Cami liked Robbie too much.

Keith said, “Because of your passion, you grossly exaggerated the experience [with Robbie.] How will you fix this?”

He desperately wants her to acknowledge his penis is bigger.

Keith wants details about Robbie.  He wants to know if Robbie was circumcised. [Keith is.]

It goes on and on and the lil’ fella was so jealous and hurt about her liking Robbie that he seeks to punish her. It meant a lot to Cami to work for Rainbow Cultural Garden and be with little Galen.

One of her collateral requirements now was she was forced to sign a sheet that she resigned from Rainbow.

He took away something she loved. In her resignation letter to Loreta Garza, head of Rainbow, she says she’s resigning for personal reasons and that “it’s not safe for me to be around children.”

Cami also offers as collateral, repossession of any items she may own in the future up to the value of $1 million.

Next, we heard texts that are familiar to Frank Report readers – the texts where Keith asks Cami to find him a “fuck toy.”

Keith says, “I have nothing to hide because I own you.”

Cami: Just as you do many others”

Keith: Would you accept a brand.”

Cami: What do you mean like a cow? You want to burn me?

Keith: You don’t want to burn for me?

Cami prefers tattoos, but he tells her branding is more unique and possessive.

Keith: If you understood, you would really want to get the brand.

He tells her that her brand number is “number one.”

Overall, Cami is not doing well.

She texts, “I feel like I’m drowning. I’m struggling.”

Keith: I would hope you would equally embrace these [other] women in your life.

Cami: I just want to be your wife and share your life.

She wants a family and is mourning the loss of “you and me against the world.”

Keith: Give up all your negative pride.

What I think he means is, if he can be exposed to multiple women, he won’t get bored.

Keith now encourages her to recruit a young slave for him.

Cami seems to be developing a sense of how to prevent Keith from lashing out at her. She keeps calling him “my love.” And other terms of endearments.

Keith said he wants Cami to find someone pure. He wants her to find a virgin.

Cami herself has blown it forever. She will never be pure enough in Keith’s eyes.

Because of her tasting Robbie’s semen. She ruined everything.

Keith: You exposed yourself to another man’s DNA.

He wants to start over in a sense with someone who is pure.

But he keeps wondering if he has the strength, the stamina, to go through all that again [as he did with Cami starting when she was a teen].

Cami: Please let me be your successor.

Keith wants her to find “a pure vessel for us.”  She has to be more than just a virgin. She must not have ever had even oral sex.

He keeps asking her again and again. “How many candidates [for the virgin] do you have? Who do you have?”

Cami doesn’t seem to be succeeding at finding anybody.

Meantime, she says she feels unloved and misunderstood.

He tells her she’s prideful.

At one point, Keith writes, “I almost died last night. I can’t trust you. I almost died.”

Keith goes on to say he’s worried that candidates [for the virgin] that young would not want to be with him, someone his age.

Cami says “Any young girl would be lucky to have you.”

Cami also says she is weeding out lesbians.

Keith keeps pushing her to move faster in this process of finding a virgin.

Keith: I don’t know if I have the energy to devote three to five years to get [a virgin] to where you were.

Cami seems to succumb to Keith. She says, “I choose to be with you. Even though I won’t have a family. I choose you over everything.”

She mentions she contemplated suicide.

Keith returns to the topic of her finding him a virgin. He says, regarding this pure soul that they’re looking for, who has to be young, that it will take a girl with a real sense of ignoring social norms to accept the age difference. [Keith is in his 50s. He wants a girl of 15 or so.]

Cami expresses she feels hurt, scared and alone. She expresses feelings of abandonment and wanting support.

Cami: I just want to feel safe. I keep getting rejected. I’m so scared.

Keith urges her to keep looking for virgin candidates

Then he went back to Robbie.

Keith: Do you care for him more than me?

Cami: Robbie?  Yeah, I felt like I was family. I felt an urgency to live.

She feels shame all the time. She feels hopeless. She said, “I feel life is not mine.”

Keith tells her the greatest joy is to consider others. In this case, a virgin for Keith to fuck.

Keith expressed doubt however that a young virgin would really want him.

Cami says, “You’re handsome, sexy, strong, loving, talented. You know for a fact. They all want you.”

She knows what he wants to hear.

Keith explains to Cami, “The reason you can’t be my successor is because [Robbie] touched you.”

Cami: I want to reevaluate this relationship. Everything is on your terms. I want it to be a partnership.

Keith: You are very incorrect. [and adds a sad face emoji.]

He speaks about the people who are against him. “I guess I’m under surveillance,” he says. “Efforts are being made to destroy my image.”

Frankly, really no one needs to destroy his image – he does a pretty good job of it all by himself.