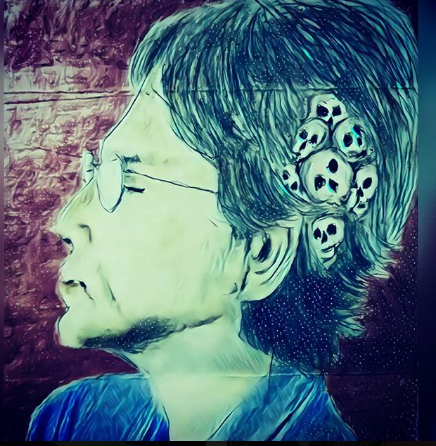 Today, as noted in an earlier post, was the last day of testimony in the trial of Keith Alan Raniere AKA The Vanguard AKA Master AKA Grandmaster (Raniere was dressed today in a royal blue sweater over a light blue shirt, one of the numerous mix-and-match outfits he has sported throughout the trial).

Fittingly enough, the day played out like the Cliff Notes version of the entire trial.

When today’s session started, Michael Weniger was back on the witness stand answering questions from the lead prosecutor, AUSA Moira Kim Penza.

The Smartest Man In The World? – Not So Much
Weniger began by reviewing a copy of Raniere’s academic transcript from RPI.

In addition to noting that Raniere was once placed on academic probation because of his low grades, Weniger went on to read off some of his grades in specific classes:
– Advanced Ordinary Differential Equations: F
– Quantum Mechanics: F
– Theoretical Physics: F
– Experimental Physics: D

Now, we know why The Vanguard went to work for a New York State agency when he graduated from RPI.

Raniere’s lead attorney, Marc Agnifilo, immediately objected – and, after a brief sidebar conference, the topic of Edmondson’s videotape was dropped.

The Vanguard Helps To Convict Himself
When testimony resumed, Weniger testified about the content of one of NXIVM’s higher-level courses entitled “Human Experiment”.

He began by noting that “As you move up [in NXIVM’s curriculum], the rhetoric…appears to be more misogynistic and there’s a great deal of sexual overtone”.

Then, the prosecution played portions of a videotape in which Raniere made several very revealing statements about his views on sex.

Among Raniere’s statements on the videotape that seemed to catch the attention of the jurors were these gems:
– Some women are able to release all of their stored-up tension when they are raped;
– A “certain percentage of women” have orgasms when they’re raped;
– Some women experience their first-ever orgasm during the course of being raped; and
– Many women report “an unexpected experience of freedom” during a rape.

Nancy Salzman Contributes To The Vanguard’s Demise
But Raniere didn’t limit his profound pronouncements to women and rape.

Next up were his views on children and sex – which were part of a module entitled “Abuse, Rights and Injury” that was taught by Nancy Salzman during a meeting of Jness (Jness is the curriculum that teaches that women are naturally monogamous while men are naturally polygamous – which just happens to be the lifestyle that Raniere preferred).

And, once again, the videotape of Nancy expounding on Raniere’s did a nice job of summarizing what a total sleazeball he is.

These are some of his more notable thoughts on those topics:
– Some children mature at an earlier age than others – and are mentally capable of having sex with adults without experiencing any psychological harm;
– It’s “society” that considers sex between an adult and a child to be abuse;
– There is no harm if an adult parent has sex with a child and the child enjoys it?”;
– “In some parts of the world, the age of consent is 12”; and
– “An adult and child are having sex. What’s the difference between the child being tickled and the child being stimulated?”.

Raniere is known to have fathered at least two children: Gaelen and Kemar. Fortunately, he was separated from both of them before he was able to put his philosophies about children’s sexuality into practice with them (Gaelen’s mother fled with him – and Raniere was arrested only a few months after Kemar’s birth).

The End Is Near
Following a relatively brief and uneventful cross-examination by Marc Agnifilo, Weniger stepped down from the witness stand

At that point, Moira Kim Penza stood up and announced: “The prosecution rests”.

All eyes in the courtroom immediately turned to the defense table where Raniere and his lead attorney, Marc Agnifilo, were engaged in a whispered conversation.

[Earlier in the day, Agnifilo made a motion that the indictment be dismissed because the prosecution had not proved any of the charges beyond a reasonable doubt. The motion was immediately denied by Judge Garaufis].

In response to the judge’s inquiry, Agnifilo announced: “The defense rests”.

The judge then asked Raniere a series of questions to ensure that his decision not to testify on his own behalf was well-documented for the expected appeal if Raniere is found guilty.

Raniere responded, “I do, your honor” to each such question – and, just like that, the major portion of the trial was over.

Next up will be a meeting tomorrow morning between the prosecution attorneys, the defense attorneys, and the judge to finalize the wording of the judge’s charge to the jury.

After that, closing statements will take place on Monday.

Each side indicated it will take about 4 hours for their closing statement – which means that the judge will formally charge the jurors on Tuesday and turn the case over to them.

One of the complicating factors at this point in the trial is that two of the jurors are scheduled to be on vacation during the week of June 23rd (The judge previously indicated that he would allow them to adhere to their plans).

What that means is that if the jury doesn’t reach a verdict by Friday, June 21st, two of the alternates will be subbed in for the vacationing jurors – and the deliberations will have to start all over again (The alternates are not allowed in the jury room unless/until they officially replace one of the regular jurors).

So, can anyone guess when the jury will reach a verdict in this case?

I’ll take late morning or right after lunch on Friday – which will make it the second Good Friday on my 2019 calendar.

Click here to post a comment
FBI Agent: Does Closeup Photo of Buffalo Protester Pushed by Police Suggest He May Have Faked the Whole Thing – Even the Blood?
Prosecution Rests, Defense Chooses Not to Put on a Case; Closing Arguments Will be Monday