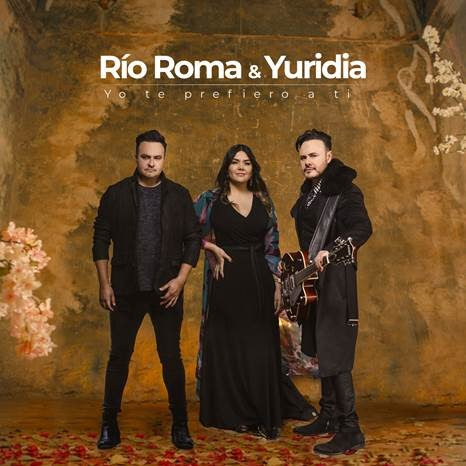 The leading duo in romantic songcraft, Río Roma, and one of Latin America’s most gifted voices, Yuridia, join forces on “Yo Te Prefiero a Tí”, the perfect song and video for anyone who is head-over-heels in love.
This single is sure to take its place among Río Roma’s long list of classic ballads. “Yo Te Prefiero a Tí” will be a much-dedicated song by lovers who are all-in, even if their partner isn’t for any number of reasons. The emotion of this song, written by Río Roma‘s José Luis Roma, is beautifully interpreted by he and his brotherRaúl Roma, along with Yuridia.
José Luis Roma is grateful that Yuridia lends her voice to this song: “We are very happy to have recorded this track with someone who we consider to be one of the best voices in Latin America. She is a great artist and a great friend who has become our musical accomplice. We are certain that our respective fanbases will embrace this song as a gift from life, which is the way we see it.
“Listening to ‘Yo Te Prefiero A Tí,’ we feel like it’s going to become a classic of our discography, and it gives a peek into why our upcoming album is titled ROJO, because Red doesn’t just stand for love.”
The single is accompanied by a music video which represents the first chapter of an ongoing saga of love, suspense, and contraband. Directed by Pablo Croce (Ha*Ash, María José, Gloria Trevi), it also portrays Río Romaand Yuridia reaffirming their musical friendship as they perform this song. These two artists previously collaborated on the track “Amigos No, Por Favor”, which was certified Platinum in Mexico and also written byJosé Luis.
Río Roma‘s previous album Eres la Persona Correcta en el Momento Equivocado was certified Platinum+Gold in Mexico. The brothers toured their native Mexico, along with the USA and Latin America, in support of this album.
“Yo Te Prefiero a Tí” is the third single from Río Roma‘s forthcoming album Rojo. Its first two singles were “Deberías Estar Aquí”, whose video has surpassed 22 million views; and “Algo Especial” featuring Descemer Bueno. Both of these songs are produced by the award-winning virtuoso Andrés Castro (Thalía, Shakira, Sebastián Yatra, Ricky Martin).
More details about Rojo and its supporting tour will be announced soon, but we can already reveal that Río Roma will perform September 20 at Mexico City’s iconic Auditorio Nacional.