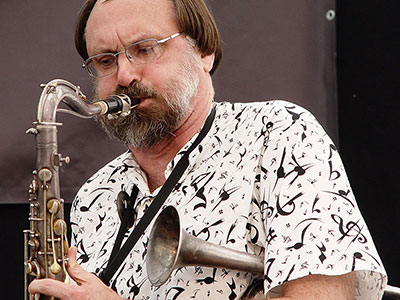 The jazz veteran returns to his first love, the tenor sax, with a stellar quartet featuring Helen Sung, Martin Wind and Dennis Mackrel

4 stars “[Robinson] swings effortlessly and delivers a singing quality on several originals, while also incorporating some unconventional twists on three standards and one familiar pop tune…A winning set by a copacetic crew.”

“Tenormore, the vibrant new album by saxophonist Scott Robinson, is the story of a beautiful

friendship between a man and his horn.” – Michael Roberts, Jazziz

Saxophonist Scott Robinson, one of the most in-demand sideman in jazz and proficient on every instrument in the saxophone family, focuses on his first love, the tenor saxophone, on his new recording Tenormore. He performs music from the CD on Sunday, June 23 at the Rochester Jazz Festival, Max of Eastman Place, 387 East Main St., Rochester, NY. Sets at 6:15 and 10 p.m. Joining him will be the band from the album featuring pianist Helen Sung, bassist Martin Wind, and drummer Dennis Mackrel.

For most saxophonists, the release of an album spotlighting the tenor would hardly merit notice. Robinson, though, is not most saxophonists; in fact, it seems tremendously reductive to refer to him as merely a saxophonist. He is a master of that full family of instruments, of course, and over the past couple of decades has garnered great acclaim for his work on the baritone in particular, notably through his work with the Maria Schneider Orchestra. But he’s also known as an avid collector of rare and obscure instruments, everything from the bass marimba to the sarrusophone to the contrabass banjo.

Despite his vast arsenal of exotic sound objects, the tenor saxophone remains Robinson’s first love. On Tenormore (released April 5 via Arbors Records), Robinson gets back to basics with the first all-tenor release in his extensive discography. Released just in time for his 60th birthday, it’s at once an opportunity to look back and reconnect with an old friend, while at the same time offering the first document of his outstanding quartet with pianist Helen Sung, bassist Martin Wind, and drummer Dennis Mackrel.

“Tenormore is a very natural step for me,” Robinson says. “The tenor saxophone is my main instrument, my home base, my comfort zone – if there is one. It’s like the sun, and all the other instruments are like planets that revolve at varying distances. So I felt like it was time to make this album, to come out and make a statement: I’m still a tenor player at the core.”

Robinson wears his history with the sax proudly – and quite literally: the hat that he sports on the album cover was crafted from 177 reeds that he’s played over the years. But the sound of Tenormore is not just about the type of instrument that Robinson is playing; it’s about a very specific tenor in particular: the silver 1924 Conn that he discovered in a Maryland antique shop in 1975 and has played ever since. In the liner notes, Robinson pens a moving love letter to the horn, which traces a life together with all of its triumphs and tragedies, from travels around the world to a near abandonment on a New Jersey Transit bus.

“I often say that we two are like an old married couple,” he writes. “We roll our eyes but forgive each other’s faults, because we’ve been together long enough to realize that we’re better together than apart.”

One imagines that Robinson speaks from experience. His wife Sharon (a relationship that predates even that with the ’24 Conn, dating back to the 6th grade) plays flute on “The Weaver,” a dedication to Robinson’s father that opens with a short haiku recited by the elder Robinson at Scott and Sharon’s wedding. Sharon also receives an homage via “Morning Star,” a piece whose joy, tenderness and playful spirit paint the portrait of an ideal pairing. But the remainder of the album is all about the romance between a man and his horn, and it’s one that’s likely to sweep listeners up with its full range of emotions.

The album opens with Robinson’s solo rendering of The Beatles classic “And I Love Her.” While he makes the sacrilegious confession that he’s “not a Beatles fan,” he nonetheless got the four-note refrain stuck in his head one night, only exorcising it with this keening, heart-rending take, recorded late at night, after the rest of the band had left the studio, in one take with a split reed. The wear and exhaustion of a day’s recording and a life’s experience tells on both musician and instrument, in a most stirring, solitary fashion.

“Tenor Eleven” takes things in a decidedly more jaunty direction, with an elusive eleven-bar blues that Robinson tears into with delightful abandon. It’s the first of three related originals on the album: “Tenor Twelve,” originally recorded on his 1988 albumWinds of Change and substantially transformed in this revisiting, features a tone both burly and sharply honed, often erupting into squeals of delight before ending with a punchy back and forth between Robinson and Mackrel. The title tune, which closes the session, slyly complicates things even further, with a series of ten-bar sections followed by an indeterminate number of additional bars. In practice, that leads to a series of intriguing and engaging interactions between the various members in rotating combinations.

Sung switches to organ for Wind’s gospel-inflected contribution, “Rainy River.” The piece was originally written for The American Place Theater’s production of a one-man play based on Tim O’Brien’s novel The Things They Carried, and the wisdom in Sung’s lush exaltations and the composer’s profound melodic musings fully captures the story’s hard-earned life lessons.

The rest of the album consists of a number of perfectly-chosen standards. “Put On a Happy Face” becomes surprisingly melancholy in the quartet’s delicate ballad reading, highlighted by Robinson’s breathy, bittersweet blowing and the sympathetic caress of Sung’s comping. “The Good Life” opens with the four bandmates enjoying just that, with a free improvisation that finds Robinson’s sinuous tenor snaking around Wind’s groaning bass, with Sung spiraling around them and Mackrel offering colorful punctuation – until the tension suddenly breaks into a relaxed stroll through the familiar melody. Finally, “The Nearness of You” offers one last left turn, this time into a sprightly, soulful funk vein with Sung returning to the organ.

With an album full of deep communications and small delights, Scott Robinson has once again shown off his ability to be anything but predictable. From the avant-garde excursions and mad-science fusions of his releases on his own ScienSonic Laboratories imprint to the more straightahead but equally thrilling tunes on Tenormore, the saxophonist enjoys an instrumental homecoming that makes perfect sense. “I love playing adventurous, hard to define music,” he concludes. “But at the same time I love to swing, play tunes, and play ballads. I have fun combining things like three bass saxophones and marimba, but I still adore the tried and true piano-bass-drums rhythm section. It never gets old, and I need to do this too.”

Scott Robinson and his unusual reed and brass instruments have been heard throughout 55 nations and 250 recordings with a cross-section of jazz greats representing nearly every imaginable style of the music, including Bob Brookmeyer, Tom Harrell, Frank Wess, Maria Schneider, Anthony Braxton, Joe Lovano, Ron Carter, Ella Fitzgerald, Ruby Braff and Roscoe Mitchell. Primarily a tenor saxophonist, Scott once placed directly below the great Sonny Rollins in the DownBeat Readers Poll. As a composer, his works range from solo performance pieces to chamber and symphonic works. He has been a writer of essays and liner notes, an invited speaker before the Congressional Black Caucus, and a Jazz Ambassador for the State Department. Scott releases highly adventurous music on his ScienSonic Laboratories label, and his Doctette (celebrating pulp adventure hero Doc Savage) gave what The Boston Globe called “the most quirky and delightful set” of the 2015 Newport Jazz Festival.