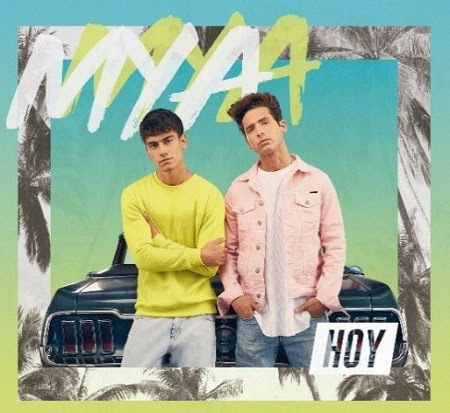 HOY is an invitation to live in the present…
“Because today is the time to open our eyes, to enjoy, to feel, to cry, to dance and forget. HOY is the importance of living in the present, here and now, to appreciate the presence and the love of the people around us… without thinking about the frustrating future or the tormenting past… to live the life we wish we had and change whatever we want to change today.We feel that today is the day we release our first chapter as a duet, our first complete work, not yesterday, not tomorrow… HOY.”
HOY is MYA‘s first studio album. Maxi and Agus wrote the songs in different locations since they began their adventure together. “Amor prohibido” was the first song they wrote together and since that day they never stopped composing. Some songs were born in the studio, some on a plane travelling during a tour and others during sessions with songwriters from around the world.
“We enjoy writing very much, in fact, we build our studio wherever we go: a hotel room, on a plane and even outdoors… We are always ready.”
HOY features collaborations with great artists such as: Abraham Mateo and Feid (“Loco Por Ti“), Rombai(“Piénsalo“), Dvicio (“4 meses“), Lo Blanquito (“Tú Te Pasaste“), Leslie Grace (“Fuego“) and Pedro Capó who sings in their new hit “Te Olvidaré” which surpassed over 5 million views on YouTube in less than a week.
“In this album we were lucky to collaborate with artists that we admire and have been listening to for a long time. We met at different times and places. Generally, the songs themselves determined the collaboration we needed.”
Endowned with a great talent for singing, acting and composing, Maxi Espíndola and Agustín Bernasconi got together on 2017 to become the duo MYA. They released their debut single “Amor prohibido” by August that year, and it reached 3 millon YouTube views in only two months. In the begging of 2018, their second single “Día y noche” amassed an overwhelming success, as its video filmed in Miami surpassed 1 million views in just a week. “A escondidas” was their next song, a hit ballad that showcased their talent in an intimate and simple background. They were awarded with the “Favorite new artist” Kid`s Choice Award that same year. Already installed as the new latin pop duo made in Argentina, they set to collaborate with acclaimed urban artists, composers and producers. Their first giant step in that direction was “Loco por ti”, wrtitten and performed together with Spanish idol Abraham Mateo and Colombian master-mind Feid. Mixed and mastered by the renowed group of producers, engineers and musicians known as ICON MUSIC –who have worked with latin stars suchs as Maluma, J Balvin and CNCO, among others–, it’s their most succesful video to date, after getting more than a million views in less than 48 hours. Their 5th single was “Fuego”, a hot collaboration with tropical-urban artist Leslie Grace that has definitively placed them in the international scene. Besides travelling across their native Argentina, during last year they have taken their music and charisma to stages across different countries: Uruguay, Chile, Paraguay, Bolivia, Guatemala, Costa Rica, Panama, El Salvador, República Dominicana and the United States. MYA kicked-off 2019 with their Live Sessions, incredible acoustic versions of their hits “Fuego”, “Loco por ti”, “Día y noche” and “Amor prohibido”, which feature intimate live set videos. By the end of January, they released their single “Te vas”, a poweful ballad composed by Maxi and Agus, which surpassed 9 millon views four months after. During last April and May, they travelled all across the United States and Puerto Rico in a High Scool Nation Tour that got them to Los Angeles, San Francisco, Dallas, Miami, Phoenix, Houston, New York and San Juan. On June 5th they released their new single “Te Olvidaré” with the successful Puerto Rican singer and composer Latin GRAMMY® winner, Pedro Capó, who became one of the world´s talents thanks to his hit “Calma.” Having more than 5 million views during the first week after its release, this new song is already the consecration of a success that could really be foreseen due to the huge popularity of MYA’s previous singles.