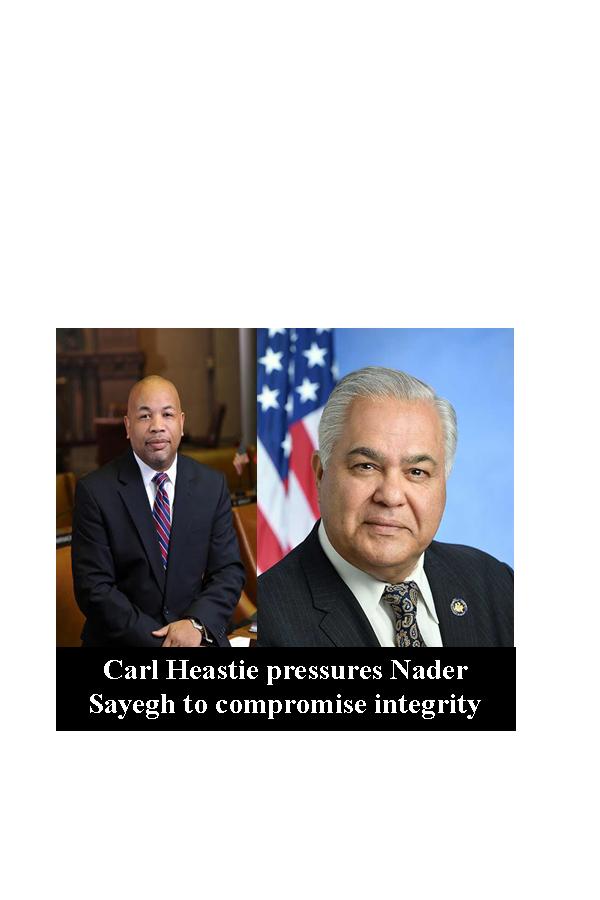 Less than a year ago, Dr. Nadem Sayegh (along with 4 other doctors) was arrested for illegally prescribing and distributing millions of oxycodone pills in exchange for money and lavish gifts.

He was a doctor.  A person one goes to for help.  A man who took an oath to first and foremost:

Instead, he created harm.

He could have done the right thing.

Instead, he contributed to the opioid crisis and ruined people’s lives.

Fast forward to less than a year later and we have his brother NYS Assemblyman Nader Sayegh doing a similar version of the same thing but this time through legislation.

Nader was in the unique position to be a veritalbe hero.

He could have saved the day for millions of kids.

But, he opted out of that.  Apparently the lure of drugs, money and gifts is just a bit too much to turn down.

On Thursday June 13, 19 Sayegh  voted “NO” in the Health Committee on a bill which would take away the religious rights to millions of NYS children and would force them to get drugs injected into their systems against their will.  These are drugs which cause cancer, encephalitis, autism, debilitating disease and in the worst cases – Death.

This NO vote would have killed the bill right there.

Voting NO was the RIGHT thing to do.

But, that was just a bit too much for him to handle because he caved to pressure from NYS Assembly Speaker Carl Heastie.

In less than one minute history was changed.

What did Carl Heastie whisper in Nader Sayegh’s ear that made him cast his vote for the unnecessary destruction of families across NYS?

Nader Sayegh COULD have saved these children.

This moment in history will signal a death knell for children across America.

With mothers sobbing in the room, Nader Sayegh had his chance to save them.

It appears that members of NYS legislature are on the payroll of Big Pharma.

What other reason could it possibly be?

In an official statement from the CDC, the CDC admittied that unvaccinated children were NOT among the measles outbreak which ‘supposedly’ triggered the dire need for this bill,

Perhaps, Nader is looking to ‘one-up’ his brother in the drug dealing business but this time – legally. LITERALLY.

He was the man who could have saved the children.

Being around criminals one tends to go criminal oneself.  It’s hard to uphold a level of ethics when those around you have none. Carl Heastie, Jeff Dinowitz, Brad Hoylman, and David Carlucci all fall into this category.

Sayegh makes a feeble attempt to justify changing his vote, but the damage was done.  It didn’t take much to make him cave.   With the exception of a very few, what we have in the NYS legislature now are spineless, sniveling jellyfish who apparently hate children and have less than zero percent integrity.

They COULD be heros.