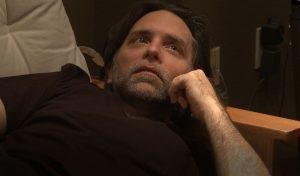 The verdict came in. Keith Alan Raniere was found guilty on all counts.

Mark Vicente and Susan Dones were in the courtroom. Barbara Bouchey, Catherine Oxenberg, and Toni Natalie were there.

When the defendant, Keith Alan Raniere, AKA Vanguard came in, he was busy talking to one of his lawyers, Paul DerOhannesian.

Keith looked serious. He knew the jig was up. His lawyers later admitted that they spoke to Keith before he came in and they advised him that, due to the ultra-fast decision by the jury – they had deliberated less than five hours [and that included lunch] – that this looked quite grim.

Keith looked a little down, depressed. Maybe even scared.

All rose for the jury- who  walked in. They were not looking at Keith. They went to their accustomed seats, where they have sat through 25 days of trial – all in the presence of Raniere.

But they did not look at him. That was not a good sign either.

And Keith did not look at the jury, either. He was looking intently at the judge.

Each of the charges were read by the bailiff.  The foreman was the spokesman for the jury.

He answered each and every one of the charged counts exactly the same –‘”Guilty.”

And as per count #2 – when each of the racketeering predicate acts were read, the foreman answered each one exactly the same – “Proven.”

When count #2 was read, and the foreman said, “Guilty,” Keith, perhaps involuntarily, nodded and began his fade to red.

As each additional charge was read and he was found to be guilty of each, Keith’s face became redder and redder and he seemed to get smaller, and smaller, – it appeared to be so – the redder he got, the smaller he seemed – while he kept hearing the same answers over and over again.

Bailiff: As to count two, racketeering, how do you find the defendant?

Bailiff: Since you answered, “Guilty” as to Count Two, indicate whether the following Racketeering Acts
were proved beyond a reasonable doubt.  Racketeering Act 1, 1A (Conspiracy to Commit Identity Theft – Ashana Chenoa)

Bailiff: Racketeering Act 6 (Conspiracy to Alter Records for Use in an Official Proceeding)

Bailiff: Racketeering Act 8, 8A (Trafficking for Labor and Services – Daniela)

Bailiff: As to Count One,  Racketeering Conspiracy. How do you find the defendant?

Bailiff: As to Count Three, Forced Labor Conspiracy. How do you find the defendant?

Bailiff: As to Count Four, As to Wire Fraud Conspiracy. How do you find the defendant?

Bailiff: A s to Count Five, Sex Trafficking Conspiracy. How do you find the defendant?

Bailiff: As to Count Six, Sex Trafficking of Nicole. How do you find the defendant?

Bailiff: As to Count Seven, Attempted Sex Trafficking of Jay. How do you find the defendant?

All the while this questioning and answering by the bailiff and the foreman was going on, Keith continued to look straight at the judge.

After the foremen finished his last answer of ‘guilty”, the judge asked each of the individual jurors, one by one, starting with juror number 2, he said, “Juror Number 2, do you agree with this verdict?”

As the judge asked each juror, Keith looked at the jurors.

Each of the jurors – from number two to number 12 in turn answered yes.

The case was officially over.

Before he dismissed the jury, the judge thanked them for their professionalism and said they were excellent citizens. He said “We’re honored by your participation in this trial.”

All rose for the jury. The jury left to resume their lives, anonymous. Free from having to explain their decision, unless of course, they choose to do so.

Keith Alan Raniere AKA Vanguard was immediately handcuffed by US Marshals – who seemed a trifle too pleased with their last act in the courtroom in his trial. They handcuffed the Vanguard and led him away, to his new role, now and forever, as a convicted felon, sequestered from those – by walls and bars – from those he had preyed upon and others who he would have preyed upon had this day not occurred.