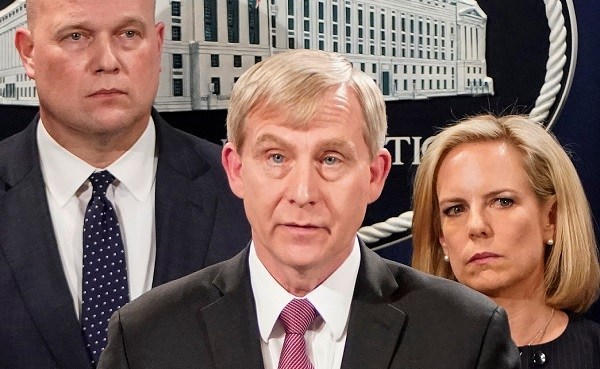 Readers might enjoy the press release for the Department of Justice, US Attorney’s Office, Eastern District of New York [EDNY] announcing the conviction of Keith Alan Raniere.
It provides an insight into how they take credit for their victories.  It is in large part a “thank you to one and all” – and I find it interesting that within their “one and all” they included the US Attorney’s Office for the Northern District of New York [NDNY].
As many readers know, the NDNY achieved considerable infamy for not prosecuting Raniere – for decades – despite their fielding the first and many subsequent, legitimate complaints about him and his deadly Nxivm criminal group.
Of course, in the last 24 hours, there’s been a great deal of applause and hearty commendations heaped upon the EDNY, and deservedly so. In retrospect, it was just about the prettiest little trial anyone ever saw in the conviction of such an ugly monster.
But, really, to thank the NDNY for their help?  Isn’t that taking professional courtesy a bit too far?
The NDNY should have been the ones who convicted Raniere and thanked the EDNY. They muffed it. Muffed it for years. The NDNY qualifies for “buffoon law enforcement agency of the ages.”
It was they who were first given evidence of NXIVM’s criminal activities – and lots of it. It was the NDNY that kept ignoring the pleas of women brutalized by Raniere, who kept turning a deaf ear to them. It was the NDNY that permitted [when they could have done something] the terror and the torment [not to mention the branding and blackmailing] of a hundred victims – right in their home turf.
And now they get thanks from the EDNY – who – from outside the area where Raniere committed most of his crimes – went in and did their job for them.
The thank you to the NDNY – it’s pure, classic, stinging irony.
Perhaps, the real meaning of the thanks, the shout-out they got from the EDNY, should be gleaned from between the lines:  What brought splendor and honor to the EDNY and Assistant US Attorneys Moira Kim Penza, Tanya Hajjar and Mark J. Lesko, and their boss, Trump appointee Richard P. Donoghue, is the fact that they went after the monster and took him down.
While the NDNY did nothing.
Had the NDNY done their job, then the EDNY would not have had their moment in the sun – their historic, complete, colossal, efficient, brilliant, innovative, precedent-setting take-down of a dangerous, sex-trafficking, racketeering cult backed by the Bronfman liquor fortune.
No, if it weren’t for the NDNY’s buffoonery – the EDNY would not have had a chance to accomplish this glorious work.  So let me add my thanks to theirs.
Thank you, NDNY — for nothing.

Keith Raniere, the founder and leader of Nxivm, was convicted today by a federal jury in Brooklyn of all seven counts of a superseding indictment charging him with racketeering and racketeering conspiracy; sex trafficking, attempted sex trafficking and sex trafficking conspiracy; forced labor conspiracy and wire fraud conspiracy.  The racketeering offense included predicate acts of extortion, identity theft, and production and possession of child pornography.  The verdict followed more than six weeks of trial before United States District Judge Nicholas G. Garaufis.  When sentenced, Raniere faces a mandatory minimum of 15 years’ imprisonment, and up to life in prison.

“As found by the jury, Keith Raniere masqueraded as a self-help guru to gain the trust of his followers, and then exploited them for his own financial gain and sexual gratification,” stated United States Attorney Donoghue.  “Raniere and his co-conspirators will now face the consequences for the serious crimes they committed and the profound harm they have caused their victims.”  Mr. Donoghue extended his grateful appreciation to Homeland Security Investigations, the New York State Police and the United States Attorney’s Office for the Northern District of New York for their assistance during the investigation and prosecution.

“Nxivm’s so called self-help programs did anything but help the women they professed to empower,” stated FBI Assistant Director-in-Charge Sweeney.  “What’s been proven today is that Keith Raniere preyed on the vulnerabilities of his many female victims, sold them lies and other falsehoods, and committed horrifying acts of coercion.  This guilty verdict is a welcome end to a case that highlighted the many avenues of criminal activity pursued by a man whose intentions were deplorable beyond belief.”

“IRS Criminal Investigation plays a pivotal role in tracing the illicit funds from such horrendous criminal behavior,” stated IRS-CI Special Agent-in-Charge Larsen.  “We proudly stand with our law enforcement partners in uncovering such crimes, and justice has been served.”
As proven at trial, in 2003, Raniere founded Nxivm, a purported self-help organization headquartered in Albany, New York, with centers operating elsewhere in the United States, Mexico and Canada.  Raniere established Executive Success Programs (“ESP”), a series of purported self-help workshops in which participants paid thousands of dollars to attend classes based on Raniere’s teachings.  In 2015, Raniere added a secret society within Nxivm called DOS or “The Vow,” with levels of women “slaves” headed by “masters.”  The goal of the criminal enterprise was to promote Raniere, for example, by exalting his teachings and ideology, and to recruit new members, including as sexual partners for Raniere.

In the course of their racketeering enterprise, Raniere and his co-conspirators committed multiple crimes, including sex trafficking, forced labor, computer hacking, fraud and identity theft.  Raniere maintained command and control over his DOS members by collecting “collateral” from them, such as sexually explicit photos and letters making accusations against their loved ones that would be embarrassing if disclosed.  For example, “Nicole,” a victim witness, testified that she was coerced into providing labor and services for Nxivm, which included taking photographs of naked women members and engaging in sex acts with Raniere, under threat of release of her collateral.  DOS slaves were also branded with Raniere’s initials in their pelvic area using a cauterizing pen.  The members of the “inner circle” were rewarded with financial opportunities and increased power and status within the enterprise.

Raniere and his co-conspirators also worked to support Raniere and protect Nxivm from perceived enemies.  Raniere conspired with two of his closest associates in Nxivm to have “Daniela,” a member of his inner circle at the time, cross the Canadian border into the U.S. with a fake identification card bearing the name of a dead woman.  Daniela testified that she assisted Raniere hack into the email accounts of persons he believed were enemies of Nxivm.

Among Raniere’s crimes was sexual exploitation of a child and possession of child pornography.  Specifically, Raniere began having sex with a victim member identified as “Camila” when she was 15-years-old and he was 45.  Raniere also took naked photographs of Camila when she was a minor.

The Defendants Who Previously Pleaded Guilty: