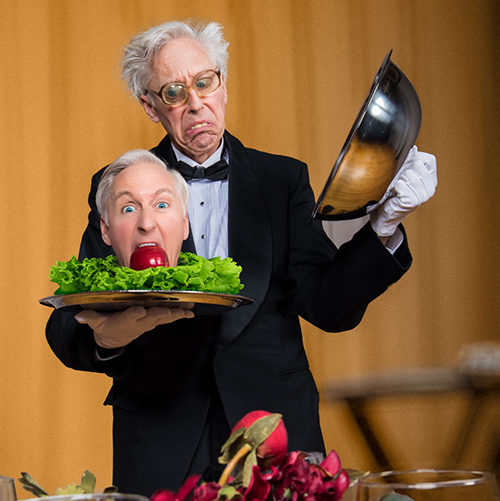 DIRECTED BY KEN SONKIN
JUNE 23 – JULY 9, 2019
San Francisco’s 42nd Street Moon (Daren A.C. Carollo and Daniel Thomas, Co-Executive Directors) is pleased to announce the final production of the 2018-2019 season, Michael Patrick Gaffney’s original one-man show THE OLDEST LIVING CATER WAITER. Written and Performed by Gaffney and directed by Ken Sonkin, THE OLDEST LIVING CATER WAITER runs from June 23 – July 9, 2019 at San Francisco’s Gateway Theatre (215 Jackson St, San Francisco, CA 94111). The press opening will take place on Sunday, June 23, 2019 at 7:00 p.m. Tickets range from $20 – $45.
VOTED BEST OF SF FRINGE 2016!  For All Events TOP TEN SOLO PERFORMANCES 2016! Jumping Clapping Man’s Top 10 Picks of 2016!
“Brilliantly conceived, directed, and acted.” – ForAllEvents.com
Hungry for some great theater? Longtime Moonie Michael Patrick Gaffney’s original one-man show, THE OLDEST LIVING CATER WAITER, offers up delicious insights into his complicated and hilarious careers as both a professional actor and a high-end waiter to the stars. Gaffney cooks up numerous characters from his past with just the right amount of sauciness, Shakespeare, and a soupçon of self-discovery. Come celebrate one man’s journey of a life in the theater.
“Michael Patrick Gaffney and I met almost 15 years ago,” said 42nd Street Moon Co-Executive Director Daren A.C. Carollo, “and there was an instant artistic spark between us. We have worked together multiple times since then. He has been acting with 42nd Street Moon for decades. Gaff, as his theatre family calls him, has created a show that allows you to dive into the artists mind, heart, and soul. At the same time, he revels in his split life as a catering waiter to make ends meet in the crazy expensive Bay Area. I have seen every reading, every workshop, every version of this play and I can tell you that it has turned into 85 minutes of raw entertainment. There is something relatable for everyone in this tale of a man’s dream…and his side gig.”
“‘We are what we repeatedly do.’  That’s a quote by Aristotle…or Will Durant,” said Michael Patrick Gaffney. “Or I’ve even heard it could have been Oprah.  Regardless of who coined the phrase I think it’s a good one and it pops into my head quite a bit.  If it is indeed true that we are what we repeatedly do then I am a cater waiter who occasionally has the good fortune to be an actor.  Every year when I file my taxes and have to fill in my occupation I pause and my whole life flashes before my eyes!  Why didn’t I go to graduate school?  Why didn’t I go to New York instead of L.A.?  Why didn’t I try harder?  Then I shrug my shoulders and write CATER WAITER/ACTOR.  This piece started off as a fun little show about my dishy adventures in the catering industry, but somewhere along the way it turned into a memoir of sorts.  No one’s life turns out the way they think it will and some people are better at letting go of youthful dreams and getting on with life.  That would not be me. I want to thank Daren Carollo and Daniel Thomas for making this production possible.  42ndStreet Moon has been my cherished theatre home for many years and I am forever grateful to Greg MacKellan for believing in me. I have done over 16 shows on the squeaky boards of the Eureka Theatre, newly named the Gateway Theatre so if I fall off the stage there is no excuse!”
Twelve years in the making, Gaffney started writing about his experiences preparing exquisite meals and preparing numerous characters for the stage. “I don’t know which is worse: an actor’s nightmare or a waiter’s? Not surprisingly, I have them both.” He was encouraged to workshop the piece and over the last few years, THE OLDEST LIVING CATER WAITER has been further developed and performed at Berkeley Playhouse’s Julia Morgan Theater and at ZBelow and won Best of Fringe at the 25th Annual San Francisco Fringe Festival.
From the moment he first donned his waiter tuxedo, Gaffney says, “It felt a little like a costume. It felt right.”  Once his catering career took off, he found he could support himself with a flexible schedule while maintaining “the life of an artist.” He has spent years working multi-million dollar affairs.
In addition to Messrs. Gaffney and Sonkin, the creative team will include: Michael Palumbo, Benicia Martinez, Michael Berg, Kevin Roland and Tom Orr.
THE OLDEST LIVING CATER WAITER has a running time of 75 minutes (no intermission).
THE TEAM:
ACTOR, PLAYWRIGHT: Michael Patrick Gaffney*
DIRECTOR: Ken Sonkin*
LIGHTING DESIGN: Michael Palumbo
SCENIC DESIGN: Benicia Martinez
COSTUME DESIGN: Michael Berg
VIDEO & SOUND DESIGN: Ken Sonkin*
PIANO RECORDING: Kevin Roland
ORIGINAL LYRICS: Tom Orr