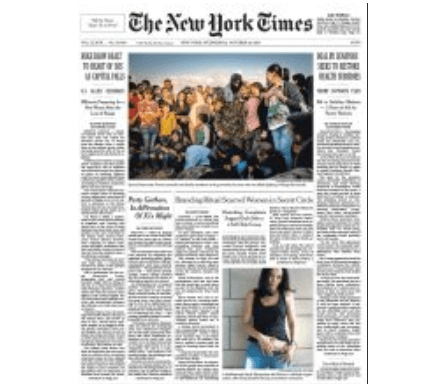 Editor’s Note: Liz, whose last name is known to me, works in the national radio news business and lives in the Albany area. Her letter calls into question the inaction of local law enforcement, and particularly the US Attorney’s Office in the Northern District of New York, which is where she lives and was the home turf of Keith Alan Raniere.

By Liz From Albany

Eight men and four women down in Brooklyn did in just four hours what the entire government 100 miles north couldn’t, or wouldn’t, do for over a decade: They declared Keith Raniere, leader of NXIVM, guilty.

I have been following this story for more than two years. It’s much bigger than this one guy, Keith Raniere, but at least he’s knocked down. For now.

The operation still continues, but maybe a bit less openly and a bit less efficiently, operating in this country, Mexico, Canada, the UK. The children’s daycare centers are mostly still running (except in Miami, where they were shut down shortly after the Epstein case started to be re-examined).

The bigger, wealthier, more famous players are still free — save for a few that have been sporting ankle bracelets for several months and will be sentenced after the media attention dies down and hopefully the public has forgotten about this monstrous organization still existing.

There are new charges reportedly coming, charges that should have been filed a long time ago, charges that the wounded took to many different law enforcement and government agencies only to be ignored. In the course of celebrating this week’s victory, the FBI [In the Eastern District of NY] explained that when the NY Times ran the article about this group, that’s what sprung them into action.

Never mind that the newspaper up here, the Albany Times Union, did extensive and detailed coverage of this group in 2012 and their series resulted in nothing other than lawsuits against some of the sources of the story, the loss, or near loss of a journalism career by a distinguished journalist who won an AP award for this very coverage, [James Odato] and a lot of other hi-jinks.

Never mind that the New York Post, MacLeans, Forbes, Vanity Fair and other publications had been covering this story for years also.

And there is that dedicated reporter from Niagara Falls NY who held onto this story like a feral dog that just got a bone and would sooner bite you than let go of that bone.

I can only wonder why their words never reached anyone in the US Attorney’s Office for the Northern District of NY, who were in a position to do something about all of this.

It was the NY Times that finally got the attention of the FBI in the Eastern District of New York.

I guess when we want to report crimes from this point forward, we, in Albany, should just take a bus down to Port Authority, walk across the street and see if we can garner the attention of some NY Times reporter.

Ah, but this is a cynical viewpoint. Raniere is behind bars now and will be, probably, for the rest of his life — experiencing the kind of confinement and psychological trauma that he dished out to lots of women and men over the past decade. A vengeful public applauds and smacks their lips because they think they have tasted justice. But have they?

What is to happen to those who were damaged by this still-operating organization?

Well, some of the more prominently featured folks in this story will be making money selling their stories. HBO has something in the works right now, and there are other major documentary in progress as well. Books will be written, speaking arrangements made, this will be the Summer of the Scary Cult. And then it will go away, while Keith Raniere sits in jail, growing more angry every day and thinking he got a raw deal.

Maybe he did. He’s just a schmuck from Albany who was set up to be the point person for something waaaaay bigger than what he is. I’m not excusing the very real things he did — not by a long shot. But the power and reach of this organization couldn’t have grown to the size that it did merely under his leadership. He didn’t have enough money to do that by himself. He didn’t have enough connections to do that by himself. And despite his claims of being the world’s smartest and most ethical man, he simply could not see that the conman was being conned by those who were more skilled at the game.

So yeah, it’s a good thing this little perch was pulled from the waters. But I wonder about the bigger fish out there who still swim in the murky waters of human trafficking.

My guess is that they will re-brand themselves (while still branding others, but with a new logo) and continue business as usual. Because, apparently, life is a Cabaret, old chum and money makes the world go round.