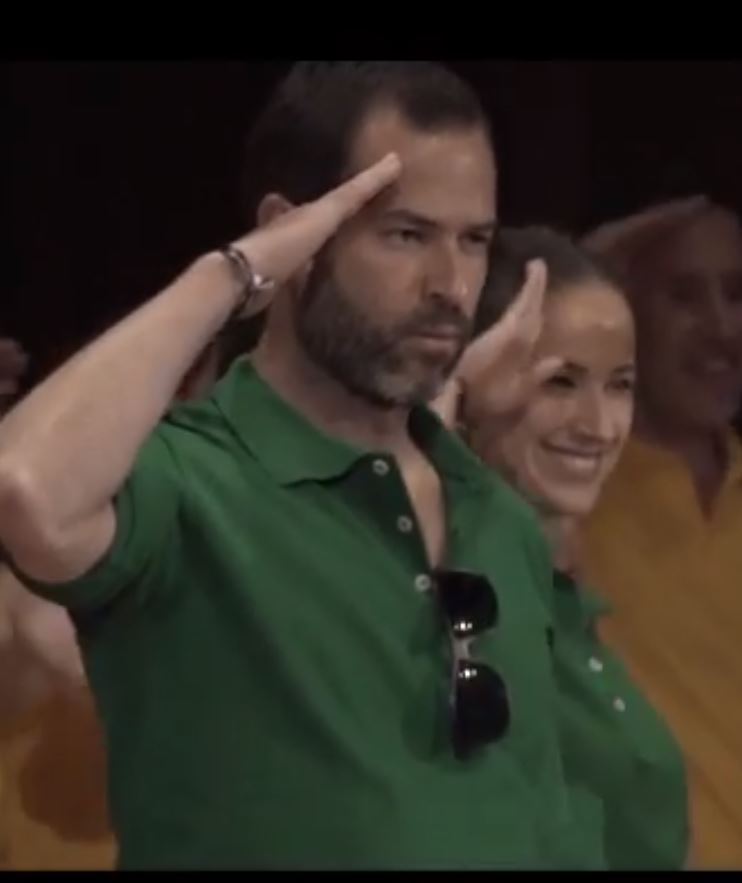 Yesterday, Artvoice revealed that Emiliano Salinas is under threat of being indicted.  Sources said he is set to flee to Cuba to avoid extradition.

In the meantime, he is being pounded by Mexican media. One of the most distinguished publications, Aristegui News, founded by world-famous journalist Carmen Aristegui, was one of the first of Mexican media to report on Nxivm – prior to Raniere’s arrest.

They have taken up a cause Artvoice has long reported on – the dangerous Rainbow Cultural Garden child experiments, devised by Keith Alan Raniere, and operated by two DOS slaves, Loreta Garzaand Rosa Laura Junco, and Emiliano Salinas.

Here is a translation of some of the Aristegui story, which was written by Juan Omar Fierro and Sebastián Barragánh

At least three children enrolled in Rainbow Multicultural Garden face language problems after attending the school that operates under the philosophy of Keith Raniere, leader of Nxivm who was convicted of sex trafficking, fraud, identity theft and forced labor in a New York federal court.

The commercial name is Rainbow Cultural Garden, but its corporate name is Multicultural Value Development Center…..

A spokesperson for the Salinas family informed the media that the siblings invested 4.5 million pesos {$235,000] into this project.

Both women are members of Raniere’s inner circle [both his first line slaves]. They started with an investment of 50,000 pesos each. [$2,614 each.]

The educational [experimental] system is based on teaching seven different languages to children [one new language each day] who are just beginning to learn their own mother tongue.  This supposedly helps the child understand the world in seven different ways.

… the cost is up to 60 thousand pesos a month [$3,137] and children have to be on a 100 percent vegetarian diet, including children under one year old – with the objective of children experiencing “multiple languages and cultures with the purpose of becoming citizens of the world.”

… parents do not have access to the school or to supervise their children’s learning. They are prohibited from conversing with the children’s teachers.  Not all teachers have teaching certifications…

[Frank Report revealed all this long ago but it is nice to have this confirmation.]

The director of Rainbow [Mexico City] is Cecilia Salinas. She is assisted by Fabiola Sánchez de la Madrid, wife of lawyer Federico de la Madrid Cordero, who is the son of the late former president of Mexico, Miguel de la Madrid Hurtado …. the academic director [is], Yvonne D’Harcourt, and the administrative director, Doménica Giordano.

According to Rainbow’s official website, there were schools in the United States (Albany, New York and Miami), Mexico (Mexico City, Monterrey and Guadalajara), Guatemala, Spain, and the United Kingdom.

In 2015, [and later] Raquel Perera, wife of singer Alejandro Sanz , opened a branch in Miami…

On May 3, 2018, the Florida Department of Children and Families ordered the closure of the facility due to the arrest and formal charges against Raniere, the Miami New Times reported. [Frank Report revealed this info to the Miami New Times and is named in their report.]

Joseph O’Hara, a consultant to Nxivm between 2003 and 2004, told The Sun that in the United States Rainbow hired people without academic training…

“The so-called curriculum in which they are immersing these children is harmful. We have examples of children who go out and cannot speak in any language, only stammering (…)

“Everything I have read suggests that, in fact, there is psychological damage in children who do not learn languages at an appropriate age,” O’Hara told the Sun.

Raniere placed one of his own sons [Kemar] in Rainbow [actually he placed both of his sons in Rainbow],  according to documents from the  Prosecutor’s Office in New York City. Raniere sent [Kemar] to the Monterrey campus after he fled from the United States authorities.

The damage caused by Rainbow’s method, according to O’Hara, apparently was unknown to Paulina and José – Josecito’s parents {not their real names]…

Their son was in Rainbow for two years and today he must take therapy to overcome the language and behavioral problems he suffered after his stay in Rainbow.

“My son now takes therapy of all kinds, sensory, speech, social adaptation, behavioral… Suddenly, he got mad at nothing…” said Jose, the father of Josecito.

Because the child faced problems learning several languages at the same time, Rainbow recommended the family see a certain specialist to diagnose their child.  The alleged therapist gave the parents a document that contained the name of a girl unknown to them.

“He sent it to me by email and I found that he copy-pasted another diagnosis. …  instead of putting ‘José has such a thing’, he said ‘Marianela has… ‘ “explained Pauline, the mother…

The [bogus] diagnosis of Josecito did not convince his parents that it was accurate as to what was wrong with their child. Paulina and José did not act upon the recommendations. They faced acts of discrimination and mistreatment by Rainbow managers, including Cecilia Salinas, they said.

… they had to face this situation alone. They could not freely enter the facilities of the school, explained Paulina. [Which makes one wonder why they continued to keep their child in Rainbow. But this is how cults work. Paulina and Jose, needless to say, were Nxivm members and believed that Keith Raniere was the smartest and most ethical man in the world and they believed that high-rank followers like Salinas, brother and sister, knew what was best for their child, better than they knew themselves.]

The father said, “I left my son and they did not send me photos of what was good… There was no camera in the school so that, through the internet, I could view my son…, to know if the school was good or not. There were many cases of children abused in other schools and … I wanted to … [view] my son, but I was not allowed. ”

Things worsened for Josecito and his family until the celebration of May 10 [Mother’s Day], which was the worst Paulina ever had.  Her son had been isolated with another child and her husband was not invited because the school… prohibits the joint participation of men and women in family activities.

The failed celebration of Mother’s Day made her finally make the decision to take the child out of Rainbow school.

“I went out sadly from there because I was looking forward to it; it was the second May 10 that I was going to spend with my son, and I saw that everyone else’s child was doing something while my child was isolated. That was one of the reasons we took him out. He did not want to live with his brother anymore. ”

….Leaving Rainbow represented an immediate improvement for the child.

“When we took him out of the school he made a 360-degree change. He was my happy child again… he was once again the little person I had first left in Rainbow, ” explained Paulina.

RAINBOW AND ITS RULES, NXIVM STYLE

…  there are study plans for up to 100 thousand pesos per month,  [$5,228] an amount that seems high considering the poor facilities and poor quality of food they give children.

The parents are required to sign a contract prohibiting them from hiring any employee of the Rainbow Center, under penalty of a 200,000 pesos fine...

The rules prohibited parents from communicating with teachers “at no time and under any circumstances inside or outside the school.”

According to the “Parent’s Manual”, children must eat in the establishments and the food is 100 percent vegetarian with set schedules.

{All of these parents bought into because they believed in Raniere’s genius.]

After the scandal over the arrest and imprisonment of Raniere, parents’ confidence in Rainbow Multicultural Garden fell. Most of them took their children out of the school, but the project never stopped operating.

It has moved twice and during the month of June. Rainbow settled in avenue Jesus del Monte 4, Colonia Las Palmas Hacienda, in Naucalpan, State of Mexico, about 10 minutes from their old location.

The new name is culturED, Centro Educativo Multicultural… Fabiola Sánchez de la Madrid is still part of the school’s Board of Directors, as is Cecilia Salinas…

At the end of the day, are there still parents who want their children taught under theories devised by Keith Alan Raniere?

Shivani: Raniere May Have Little to Offer to Negotiate a Better Prison; What Has Bronfman, Mack, Salzman Already Told to Make Deals?
Part 6: Lauren Salzman: Cross-Examination Stopped by Judge: Final and Gripping Conclusion