Alejandro Betancourt, the former Mexican leader of Nxivm, has taken down his website, or at least it was taken down for him.

When visitors go to visit http://alejandrobetancourt.com they are greeted with a notice that the website has been suspended.

In the past, the Nxivm leader regularly posted opinion editorials on his website where he would wax poetic on a variety of issues. 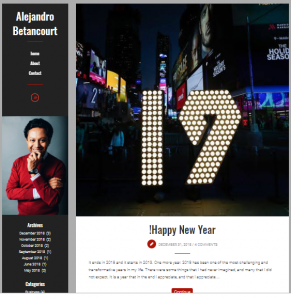 For example, he wrote on his “Happy New Year” post, “It ends in 2018 and it starts in 2019. One more year. 2018 has been one of the most challenging and transformative years in my life. There were some things that I had never imagined, and many that I did not expect. It is a year that in the end I appreciate…”

One of the challenging things that happened in the year 2018 was that his Vanguard, Keith Alan Raniere, was arrested.

As for 2019, this year so far saw Raniere convicted and before it ends might see Betancourt’s arrest on Nxivm racketeering related charges.

Then there was his op-ed on his website, Congratulations Mr. President, where Betancourt offers a warm welcome to the new Mexican president, Andrés Manuel López Obrador.

No wiser words were ever spoken by even his Vanguard, who was a great leader of a highly ethical community, then lost all and was placed in jail where he will likely spend the rest of his life.

Betancourt also wrote an article that appears to be about me and the Frank Report, in June 2018, although he does not mention me or anyone directly by name.

It was titled Defamation in the Age of the Internet.

He writes, “In a way, people now have the most power ever in the history of humanity. Never has a single individual been able to permanently affect how a person or group is perceived, using cheap and easily available tools, like now….”

While the reason for Betancourt’s website’s suspension is unclear, sources say he is out of Nxivm and has expressed deep regret for being part of Nxivm to anyone who will listen.

Like many wealthy Mexican followers of Raniere, Betancourt is a trust fund baby.  For years, Betancourt partnered with Emiliano Salinas in operating Nxivm Mexico,  known also as Executive Success Programs.

No story about Betancourt’s role in Nxivm would be complete if it does not include what Raniere told him about his past life.

According to several Nxivm sources, some years back, Raniere informed Betancourt that he had discovered who he was in his past life. Betancourt was no less a world figure than Benito Mussolini, Raniere told him.  He needed to atone, the master said, for war crimes he committed.

An awestruck Betancourt marveled at the master’s statement, but realizing this was the world’s smartest man, a man, his followers said, whose brainwaves set off radar detectors, snow storms would erupt in January when he came out with a new curriculum, and once when he went walking in the rain with a disobedient woman, it rained only on her and not a drop touched him.

How could he doubt he was Mussolini?

Raniere told him there was but one way for Betancourt to atone for his past life crimes [as Mussolini] and that was to dedicate his entire present life [as Betancourt] to spreading the word of Nxivm and recruiting new members [especially slender young women].

One man could save him from his horrible Karma. In fact, that man’s initials, K-A-R, formed the first three letters of Karma.  The rest was up to him.

Betancourt thanked his master and vowed lifelong obedience and, up until Raniere’s arrest, Betancourt was a faithful follower.

In a future post, I will explain how Betancourt might be a target for indictment for his role in extorting DOS women as part of the Nxivm racketeering enterprise.

For now, we are left to ponder why his website is suspended and what El Duce will have to say next?

For those who want to read a little about Betancourt’s criminal exposure, they can read a post I wrote in October 2017, prior to the New York Times story, when only Frank Report was opposing Raniere publicly.

Frank Report revealed in this expose that Betancourt retained a Mexican attorney to threaten to prosecute those who spoke about DOS, or said anything bad about Raniere, NXIVM, or Executive Success Programs.

I published the extortionate letter.