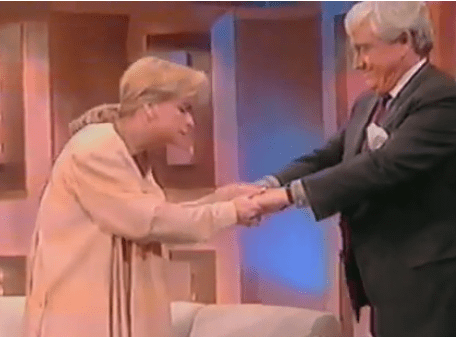 Nice Guy makes an excellent recommendation for those interested in the Ramtha School of Enlightenment – and whether it is true that a ghost named Ramtha inhabits J. Z. Knight’s body from time to time to impart wisdom to her followers.

To anyone with free time:  Watch the J. Z. Knight television interview with Merv Griffin.  Just five minutes will leave you with an OMG WTF LMAO moment.

JZ Knight [acting] channeling Ramatha on TV is on par with Elizabeth Berkley’s notorious pool scene in the movie,”Show Girls”. It’s something that has to be watched to be believed!

Nice Guy is right. It is well worth watching. Knight gives about a 10-minute performance as Ramtha. Even answering questions asked by Merv.

She begins as herself, then assumes the role of Ramtha who speaks in a kind of olde English dialect and has sort of a Jewish accent.  It takes her about a minute for Ramtha to enter her body.

Once she becomes Ramtha, she kisses Merv’s hand and calls him Master.

The time is 1985 and she makes some predictions, one of which is that the Second Coming of Christ will occur soon. She [as Ramtha] explains that Christ will not come as a person but as a higher consciousness.

She says, “That which you call the coming of Christ that will come before the end of this your time flow, your next decade…  Know you what that is, what think you that is?

“The coming of Christ is the awakening of that principle, of that divinity in all people. ‘Tis not one entity but the whole of the world, master, comes into that Christness, into that understanding that is what is meant by the prophecy.”

She also says, “This your country, you have a king that is part of this country his name is Reagan.”

She goes on to predicts that the “king” of this country, President Ronald Reagan will lead the government into a wonderful republic like Solons’ republic in Greece.

She also predicts that the California earthquakes will not happen.

She says, “That which is called an earthquake, know you what they are?… indeed you are living on the zipper. It shan’t come to pass what has been predicted for this plane.”

Knight as Ramtha kisses Merv’s hands repeatedly and she exits stage left when her time is up as Ramtha headed right toward the same door she came in from as J.Z. Knight.

Click here to post a comment
Abortions, Vagina Poses, Captivity, Getting Branded – Raniere Was Rough on Sisters, Cami, Dani and Mariana
Part 4: Keith and Cami Texts: Finding a Virgin, and Slaves for Threesomes