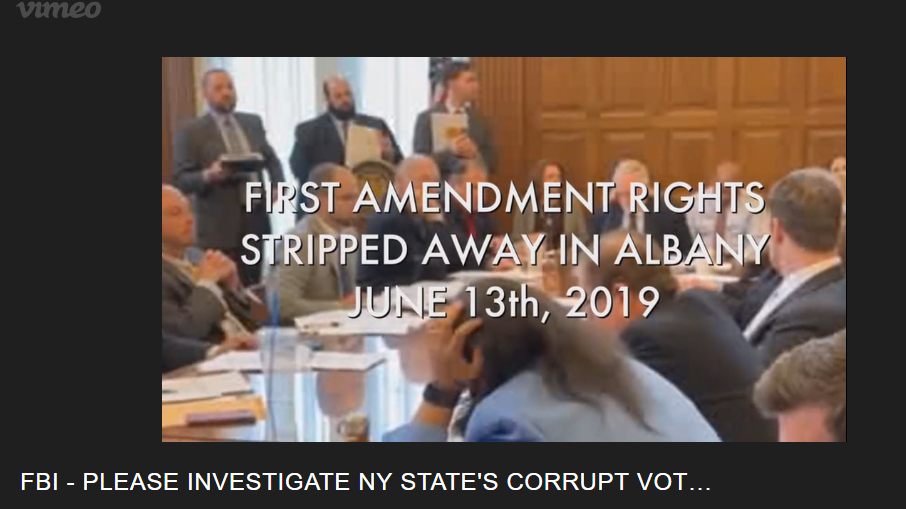 On June 13, 2019 a very small committee of NY politicians very quickly and quietly stripped away the Religious right to 20 miillion people in NYS.

The NYS Health Committee comprised of 26 people.  The committee needed a majority of 14 votes to pass a bill which would take away the Constitutional right to practice your religion the way you see fit, as well as the inalienable right to your own body.

If the committee had a 13-13 tie, the bill would die.  That is exactly what they had. A tie…until one member was coerced into changing his vote to a yes.

After the voting was done, and there was a tie, Speaker Carl Heastie is seen motioning to Assemblyman  Nader Sayegh to come over to him.  He does so and Beastie Heastie whispers something into his ear which prompts Sayegh to make a lame oration about changing his vote.

This bill took away ones’ right to opt out of getting injected with harmful, toxic, cancer causing drugs and ingredients due to one’s religious or philosophical beliefs.

The NY Fourteen, which I will name them played GOD that day and decided the fate of 20 million New Yorkers.

Some of the NY Fourteen voted YES in committee (to bring it to a floor vote where they KNEW it would pass) and then voted NO on the floor, so that their constituents would ‘see that they were voting with their constituency’s wishes’, when in actual fact, if they would look a bit further, they would see that, that is not the case.

Being that it is a constitutional RIGHT, do you think that the people of NY should comply?  I will leave that to you, but in the meantime, Kevin Barry of First Freedoms, Inc. which addresses the right to freedom of health choice, religious freedom and other freedoms guaranteed by the First Amendment to the U.S. Constitution, is calling for an FBI Investigation into blatant corruption, coercion and horse trading that went on with regard to this bill.

Perhaps when the investigation gets underway, the FBI will find numerous other egregious crimes committed by politicians in Albany.

Do you think that is possible?

Let’s sit back and watch how this plays out.

Meanwhile, watch the video which prompted the call for the investigation.