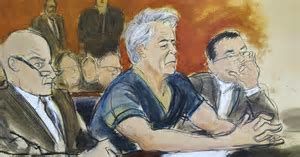 Although Jeffrey Epstein’s name has been at the top of many search engines for the past few days, many people really don’t know that much about him. Aside, of course, from the fact that he was recently indicted on sex trafficking and sex trafficking conspiracy charges – and that he’s facing 45-years in prison.

So, since we’re going to be following his case until the current charges against him are resolved via an acquittal, a conviction or a plea deal, we thought it would be helpful to gather some background information about him.

Kind of like we did with that other notorious sex trafficker, Keith Alan Raniere NKA Federal Prisoner 57005-177 (As you’ll see from this little primer, there are quite a few similarities between the two of them).

Epstein was born on January 20, 1953 in Brooklyn – and grew up in the Coney Island neighborhood.

He graduated from Lafayette High School in 1969 at the age of 16, attended Cooper Union college for two years before dropping out, and then attended the Courant Institute of Mathematical Sciences at NYU (He did not receive any degrees beyond his high school diploma).

He taught calculus and physics at the Dalton School in Manhattan for two years – and then took a job as an options trader at Bear Stearns in 1976.

Epstein quickly climbed the corporate ladder at Bear Stearns – and in 1980, he became a limited partner in the company.

Two years later, Epstein launched his own financial management firm – J. Epstein & Co. – which only accepted clients with a net worth of at least $1 billion.

He later changed the name of the company to The Financial Trust Company – and moved its headquarters to the Virgin Islands for tax purpose.

Over the course of the next two decades, his company continued to prosper – and by the early 2000s, Epstein had become a multi-billionaire himself.

Epstein first came to the attention of law enforcement officials in March 2005 when a woman contacted the Palm Beach Police Department – and alleged that her 14-year old stepdaughter had been paid $300 to strip down to her underwear and give Epstein a massage.

The Palm Beach police immediately began an undercover investigation – and eventually brought the matter to the attention of the local FBI office.

The joint investigation by the Palm Beach police and the FBI eventually resulted in the issuance of a search warrant for Epstein’s home.

The search uncovered hundreds of photographs of what appeared to be underage girls.

It also uncovered numerous hidden cameras throughout the property that, according to a story in the International Business Times, had been installed to record Epstein’s guests engaging in sexual relations with underage girls.

Eventually, the FBI gathered affidavits from 36 girls who claimed to have been sexually molested by Epstein.

Federal Indictment & Plea Deal
In 2008, Epstein was indicted on multiple sex-related charges by the U.S. Attorney’s Office for the Southern District of Florida.

The U.S. Attorney in charge of that office was Alexander Acosta – who currently serves as President Trump’s Secretary of Labor (Ironically enough, the Department of Labor is the lead agency in the federal government’s ongoing battle against sex trafficking).

Instead of pursuing the charges that had been filed against Epstein, Acosta agreed to a plea deal that granted Epstein immunity from all the federal criminal charges.

It also sealed the original indictment – and all the related filings.

As part of his federal plea deal, Epstein also had to agree to plead guilty to one state-level charge of soliciting prostitution from an underage girl, serve an 18-month term of imprisonment, register as a sex offender, and pay restitution to the 36 victims that had been identified by the FBI.

Rather than going to state prison after he pleaded guilty to the one state-level charge in 2008, Epstein was housed in a private wing of the Palm Beach County Stockade.

While there, he was allowed to hire his own “security detail” – and to work at his firm’s downtown office 12-hours-per-day six days per week.

He was released after serving 13 months of his 18-month sentence – and, thereafter, moved to New York City.

Upon his relocation to New York City, he has been registered as a “Level Three” sex offender (All “Level three” offenders are considered as being at “high risk of re-offending”).

Over the course of the past decade, Epstein has been sued by several women who claimed to have been sexually abused by him while they were still underage.

Most of those lawsuits resulted in out-of-court settlements and sealed records.

On February 21, 2019, U.S. Senior District Court Judge Kenneth Marra ruled that the federal prosecutors who handled Epstein’s plea deal arrangements back in 2008 had violated the law by not notifying any of his alleged victims about the deal.

In March 2019, the Second Circuit ordered the unsealing of all the documents in the original federal indictment against Epstein.

On July 6, 2019, Epstein was arrested as he disembarked from his private jet at Teterboro Airport in New Jersey.

Thereafter, on July 8, 2019, Epstein was charged with sex trafficking and conspiracy to traffic minors for sex. He was remanded to the Manhattan Correctional Center (MCC) pending his bail hearing on July 15, 2019.

Over the course of the next few months, we’re going to have a lot more to say about Jeffrey Epstein – and his interactions with the U.S. criminal justice system.

But at least now we have a picture of who he is – and how he came to be residing at MCC.

BTW, is it just me or are there some striking similarities between Epstein and Vanguard?