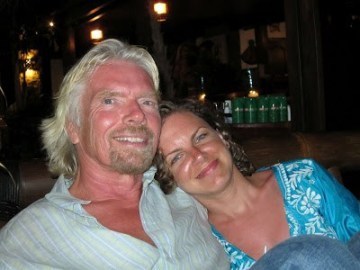 You read quotes from yourself that never came out of your mouth.

You could spend your entire life trying to handle it, when usually, no response is the best policy. So you have to learn how and when to pick your battles and to let the rest go by like a cloud of nonsense. From publicity, the famous “you” encounters a lot of misinformation about yourself and eventually, one becomes inured to much of it.

If Richard Branson sat around and read media about himself, he wouldn’t have any time left to simply live his life, do his work. He is an old soldier of fame and its prices vs. its bonuses. I doubt if the man has ever held Nxivm and its publicity under a microscope.

I can understand how come Branson would have superficial recall of Sara Bronfman and her Nxivm crowd renting his Necker Island paradise for a week or so, twice.

Branson is a busy guy and has seen decades of various groups, conferences, parties, business meetings. Of course, he is going to be a pleasant host, and it’s most likely that he would have been acquainted with Sara and maybe even her awkward sister, Clare, socially.

Most of the Raniere-and-company weirdness was still kept behind closed doors in 2007 and even in 2010, when these vacations were happening. If he really gave that endorsement quote, probably what he said was what a polite acknowledgment of the “fluff” which he saw. “The meringue on top of the baked Alaska was excellently made.”

Now, if by some chance, Branson wants to come after “his” Nxivm recommendation with a great big mop, since it is again getting negative publicity, that would be lovely.

But who knows who Branson really is and what’s inside his head? The drumbeats in the jungle about some Necker Island events are already interesting enough. Maybe he doesn’t want to open any cans full of worms.