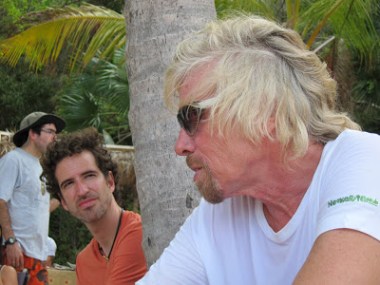 Richard Branson’s endorsement of a Nxivm event and Keith Raniere appeared online for nearly 10 years on the website of one of Clare and Sara Bronfman’s foundations, the Worldethicalfoundation.org.

The website was originally created in 2009 to announce that the Dalai Lama and Raniere were teaming up for four days in Albany to teach the world how to be more ethical.

The website posted numerous endorsements for the event, including Branson’s high praise.

The four-day event was canceled, but the Dalai Lama did make a one-day appearance in Albany. Raniere appeared briefly on stage with him.

The World Ethical Foundation website is offline now, following the arrests of Raniere and Clare Bronfman.

Here is what Branson was quoted as saying on the website about the “founding event” for the World Ethical Foundation – the pairing of two spiritual leaders – Raniere and the Dalai Lama:

“The tools you have for compassionately dealing with complex ethical and global issues are not only unique, but also extremely valuable. This, along with a program of coordinated, organized resources, makes for an innovative approach to transforming our society. I think your founding event will be extraordinary and potentially world-changing!  —Sir Richard Branson Founder, Virgin Group

Branson is not known to have attended the Raniere-Dalai Lama event he described as “extraordinary and potentially world-changing”.

After Raniere was arrested, Branson said he never heard of Nxivm or Keith Raniere.

Some found this dubious since, in addition to endorsing a Raniere event, Branson rented his private Caribbean island, Necker Island, at least twice to Sara Bronfman who used it for Nxivm intensives.  Branson reportedly attended classes during both sessions.

In response to a story in Frank Report, the Sun, wrote about Branson and Nxivm renting Necker Island.

The Sun reported, “The tycoon maintains he was not aware of any [Nxivm] seminars – believing instead it was a booking for Sara Bronfman’s friends and family only.

“A Virgin Management spokesman said: ‘Sir Richard Branson has never heard of Keith Raniere, he has never met him and there is absolutely no association between Sir Richard and the NXIVM group or its leader.'” 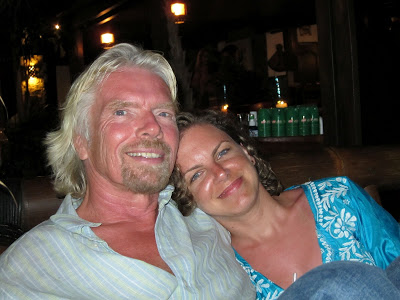 Richard Branson is seen with Sara Bronfman, a devotee of Keith Raniere. The photo was taken at Necker Island in 2010 when Bronfman rented the island. Nxivm leaders taught an intensive there.

The reason Nxivm rented Necker Island, I was told by Nxivm insiders, was that they hoped to recruit Branson into Nxivm.

Nxivm members, including Nancy Salzman, Allison Mack, Kristin Kreuk, Emiliano Salinas, Alex Betancourt, and others went to Necker Island.  Seminars were held in 2007 and 2010. Raniere did not attend either Necker Island seminar.

Bronfman reportedly paid Branson around $250,000 per visit to rent the island for about a week each time. Branson was residing on the island, and reportedly attended classes. Photos show he partied with Nxivm members.

The World Ethical Foundation, where Branson’s endorsement appears, was created by Raniere.

It is, of course, possible that Raniere or Sara Bronfman simply fabricated Branson’s quote.  It is also possible that they wrote it for him and got his approval.  Branson may have said it when Sara and he partied together.

Branson’s quote appeared on the World Ethical Foundation website from 2009. This photo of Branson and Bronfman is from 2010.

In 2007, Salzman, coming back from the first Necker Island Nxivm seminar, told me that Branson was on the island. She said she did the Nxivm teaching by day.  Branson hosted parties by night. Nxivm classes started at 7 am and were supposed to run to 9 pm or 10 pm. Salzman said that, at Branson’s parties, some women gave pole dancing performances.

A spokesperson for Branson issued the following statement: “There is no association between Keith Raniere and Sir Richard Branson and Sir Richard has no recollection of ever taking part in a seminar hosted by NXIVM. Clare and Sara Bronfman did hire Necker Island several years ago and we understand they hosted a gathering for team members of NXIVM. The island is available for hire by the public and this was one of many gatherings held on the island over the years by various groups from across the world. Sir Richard was not aware of any of the allegations against NXIVM or its leader whatsoever and did not himself host any intensive courses for the group.”

Did Richard Branson endorse Nxivm, or its plan to bring the Dalai Lama and Keith Raniere together? Perhaps.

He doesn’t seem to remember much about it. He is not known to have attended any Nxivm events except on Necker Island when he rented the island to Nxivm [Sara Bronfman]. He did not attend the Dalai Lama/Keith Raniere event that he endorsed.

This would suggest that Branson’s role in Nxivm was virtually nil.

I do believe that Raniere wanted Branson recruited. It didn’t happen.

Branson got about $500,000 for two Nxivm visits to his island where, perhaps unbeknownst to him, they were hoping to recruit him. He did not join Nxivm.

It is reported that the Dalai Lama received between $1 and $2 million to make a 1 1/2 hours speech and appear on stage with Raniere for five minutes.

One could argue that Branson received in effect $500,000 for a 51-word endorsement, which is almost $10,000 per word – since that is all Nxivm seems to have gotten for their efforts to recruit him by renting his island.

[It is noteworthy that the Nxivm members who went to Necker Island were all top recruiters and coaches for Nxivm. They did not need to hold an intensive there. Every one of them attended numerous intensives in Albany.]

Raniere and Nxivm leaders often touted Branson’s endorsement, as well as the Dalai Lama’s visit, as proof that Nxivm was a wonderful self-improvement course, led by the smartest and most ethical man in the world and endorsed by world leaders.

I am not sure what the lesson is here except perhaps “beware of endorsements,” no matter how famous the endorsers are, or how laudatory their praise.

Said another way, The Dalai Lama and Richard Branson both endorsed the sex slaver and racketeer Keith Alan Raniere and he used those endorsements to further his racketeering enterprise and enslave, brand and blackmail women.