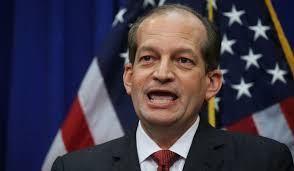 Not that it helps for the true ideologues of the left, but it might shed some light for the deluded stooges of their base. I don’t think that Acosta gave in to pressure from the high-dollar legal defense team.

I think it had more to giving in to superiors in the Department of Justice. I hope that there are many in the deep state that begin to question their defense of Clinton and his associates.

Acosta did the best he could in the Epstein situation back in 2008, and more than the Democrat State Attorney who had responsibility for bringing the prosecution.

Attacking Acosta was a way of deflecting from all the Democrats Epstein was close to and attacking Trump.

It was inevitable that Acosta had to step down because the vultures would have made this another media circus,  the Russian hoax.

Molly Hemmingway said that Epstein was an FBI informant and that’s why he didn’t get a harsher sentence. Acosta did require, as part of the plea, that Epstein register as a Level 3 sex offender – the most dangerous level.

When Epstein finished his sentence in Florida, NY Democratic District Attorney Cy Vance went to court to lower it to the lowest level –  Level1 – in NY. The judge hearing the case was outraged and refused.

Cy Vance was on TV the other day saying he didn’t know the details of Epstein’s case when he went to court requesting the reduction. What? He was a convicted Level 3 for life. What didn’t Vance pick up the phone?

Soon after, folks like George Stephanopolous, Katie Couric, Chelsea Handler, Woody Allen, Charlie Rose were having dinner at Epstein’s house and his procurer, Ghislane Maxwell, was a special guest at Chelsea’s wedding.