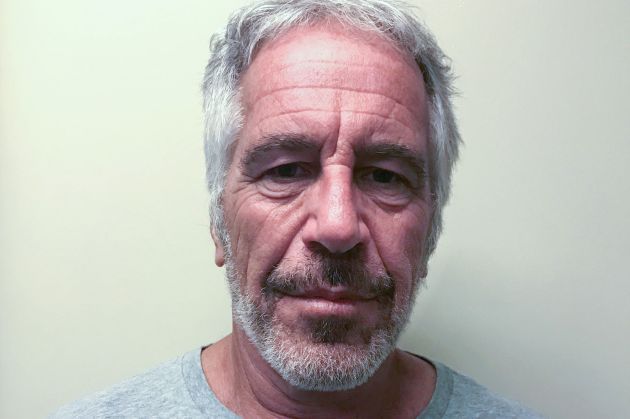 Unlike Keith Alan Raniere, who was alert throughout all of his appearances in court – from bail hearings to every moment at trial – Jeffrey Epstein, 66, seemed out of it today at his bail hearing even before he was denied bail.

A wobbly-legged, seemingly zoned out Epstein appeared and observers said he seemed like he didn’t know where he was.

Dianne Lipson, who covered the Raniere trial, was at court. She reports:

“The judge denied Epstein’s bail and said he would have a written order in the next couple of hours on the docket.  Epstein was wearing a brown shirt over a navy blue prison outfit.

“He seemed a little out of it. He seemed like he didn’t have a focused look on his face. It was very different from Keith Raniere, who was always attentive.

“Epstein continues to be remanded – at the request of the prosecution. His pretrial release was denied. The judge said he considered Epstein to be a danger to the community.  He also took into consideration the risk of flight. He said there was a preponderance of evidence regarding risk of flight.

“He said he did not think the defense could come up with any bail package that could overcome the threat of danger to the community. The judge took into consideration the prospective victims, two of whom made statements at his initial bail hearing, who said they feared for their safety and the safety of others if Epstein were to be released.

“At the hearing, they discussed evidence about whether Epstein has complied as a registered sex offender in the past. He apparently did.

“There was a discussion of the fact that the seriousness of the charge presumes detention.

“Epstein’s great wealth and vast resources also worked against him, as did his numerous foreign residences.  Evidence found at his NYC mansion was also taken into consideration: $70,000 in cash and an expired foreign passport under a fake name that made reference to Saudi Arabia.

As for his condition, Dianne added, “It almost looked like his lawyers were helping him to his seat at the defense table. Even his facial expressions seemed out of it. Almost no expression. Like he was sedated.”

It is hard to know what caused old Jeffrey to be like a zombie in court.  Maybe it is all sinking in on him and it has sunk his spirits.

This entitled perv is not getting bail and is now likely to spend the rest of his life in a cage, like his brother in spirit, Keith Alan Raniere.

What is clear is that Epstein will be convicted. He will get life in prison. No jury will acquit him.

What is not clear is if Epstein will be taking anybody down with him. Powerful people who may have enjoyed the same perversions he did with him.

Did he procure girls for others on purpose for blackmail?

Did he think he was protected because of what he had on so many powerful figures?

Did he think he could rape children with impunity because he got his powerful friends or blackmail targets to do the same and he had pictures and other evidence?

Jeffrey was led out of solitary confinement in a hell hole prison in Manhattan to come into court. His life has radically changed. He knows it. It showed on his hopeless face.

He was just there for the appearance. If he is competent to do any thinking at all, he knows he is finished. This was just for show.

The die is cast.

And maybe there is more. He may also know that he may wind up being assassinated. Right in prison. It will look like a suicide. Of course, he knows he will never have another woman or little girl again to satisfy his urges – for the rest of his life and that may be a minor consideration – compared to the threat of his sudden death.

He may know that others are going to go down because of him if he fails to remain silent. Powerful people who would think nothing of murder to save themselves.

He won’t be too concerned about the trouble that others get into – even if they were his friends. His only concern is the danger these friends present to him.

He won’t this time – even if he offers up presidents and kings –  be able to buy his way out. He will be in prison forever. Which may not be that long.

In the Bureau of Prisons, one can be assassinated. You could ask Whitey Bulger to explain how that’s done if he were around.

In any event, Epstein appeared as a zombie today. It must have been unreal to him. He knows his days are over. He is the walking dead. He will either die soon or live a while in a cage.  There will be no plea deals offered like he got the last time – where the feds agreed not to press charges against him in return for him doing 13 months in county jail in Florida with work release.

This time he is in a cage for the long haul – which may not be too long at all.

The only interesting question is not if he will be convicted, but who else was involved and how Epstein incriminated them.

That is why this story is compelling. Not his perversion but who else’s perversions. And will any of it come out – before Jeffrey Epstein dies?

When Power Runs Amuck
Photos of Salzman’s House and Cash Seized – But Where’s the Other $300,000?
Comment