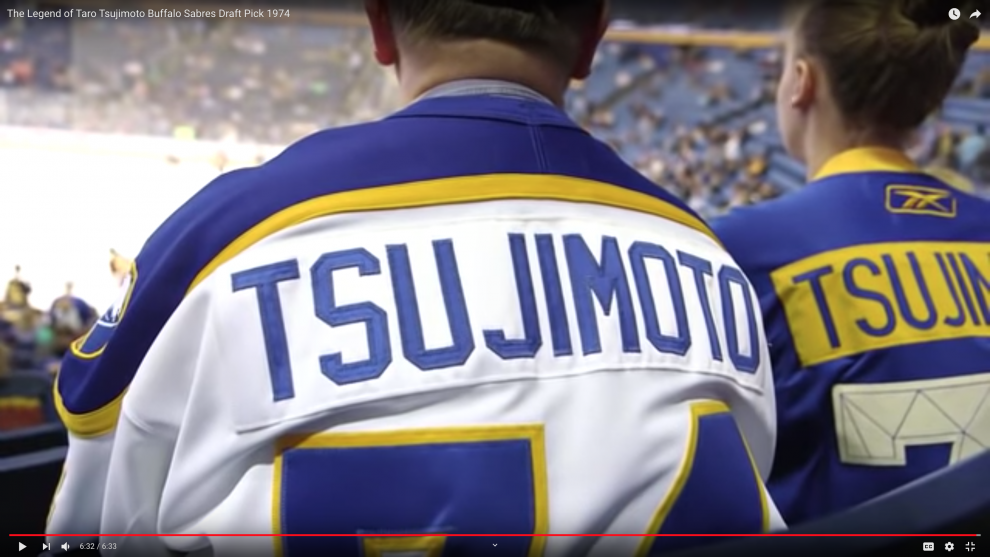 From time to time we here at the Artvoice sports desk are asked the question, “Who exactly is Taro?”

“Taro Sez” is a postscript to many of our hockey columns, offering a salient point or random quip on whatever topic at hand. But invoking “Taro” is our way of keeping alive a unique and dynamic chapter of Buffalo Sabres lore.Read the official record and you will learn this… Taro Tsujimoto was a forward, chosen by the Buffalo Sabres in the 7th round of the1974 NHL entry draft. Listed at 5 feet, 8 inches, weighing 180 pounds, and shooting right-handed, he played for the Tokyo Katanas of the Japanese professional hockey league.

Wieland was a synonymous name with the Buffalo Sabres for over a quarter-century, serving as Public Relations Director then Communications Director from the team’s inception in 1970 until 1996, the final season at the old Memorial Auditorium.

Among his accomplishments? He patched together a remote television truck from a local television station and premiered a package of home games on International Cable, in the days when cable television was a novelty. He hired some guy named Rick Jeanneret to do the play by play for those telecasts, taking on the position of color commentator himself. He served as a practice goalie during team skates, to give ailing starting goaltender Roger Crozier an opportunity for rest. (referring to Wieland.. “Just slightly better than a board”, quipped former coach Floyd Smith).

But the jokes, the practical jokes. They defined Wieland’s life throughout most of his school days and professional career. And one of the biggest and best remembered pranks for the ages was the selection of Taro Tsujimoto on the NHL’s biggest stage. It is a story that resonates to this day.

“What was great about working for the Buffalo Sabres is that they pretty much gave us the latitude to do whatever we wanted,” remembers Wieland. “From the day I was hired and showed up at training camp in Peterborough, Ontario in 1970, I got the sense just from meeting Punch (Imlach, first Sabres head coach and general manager) that there was a culture here that would enable us to do fun things.”

Over the years, the April 1st press releases, coinciding with April Fools Day, became much anticipated events amongst the media, not just in Buffalo, but throughout the league. But few were more stunt worthy than the unveiling of “Sliderex”, a new plastic ice surface that would render the need for actual ice surfaces obsolete.

“We invented Sliderex as a product from a farm in Nova Scotia, and it just so happened that right around that time the Aud’s floor was being torn apart for new piping and infrastructure. So we dutifully sent out the Sliderex press releases by mail, that’s how it was done at the time, scheduled to hit media and press desks right on April 1,” recalls Wieland.

Only by some happenstance, the release arrived at the door of WGR Channel 2 a day early. Then sports director Ed Kilgore led the newscast that night, breathlessly claiming “a Channel 2 exclusive”, touting the new plastic ice to the world. He then later expounded on the story during the telecast’s sports segment. “My wife and I were sitting at home watching, and we were in tears from laughing so loud,” said Wieland.

Wieland took his prank a step further, calling Kilgore that night to rebuke him for running the story prior to the official April 1 announcement date. “I challenged Ed and asked him ‘how did you get a hold of this information?’” said Wieland. “Ed didn’t back down, stating ‘I have other sources inside your organization, Paul’, while I knew that there couldn’t be any such sources, because Sliderex didn’t exist. It was a product of my imagination,” Wieland recalled.

For WGR-TV and their sports director, it had to be one of their most humiliating on-air episodes ever. Wieland and the Sabres p**ned the media. Kilgore fumed. Presumably, all was forgotten when Channel 2 obtained broadcast rights for Sabres games several years later and Kilgore became a part of the on air telecast crew.

“Taro Lives”, the latest book written by Wieland and published by RPSS Publishing of Buffalo, New York, talks about Sliderex and much, much more, as Wieland, a colorful storyteller, delves into his life and career across many platforms and career stops. The book serves as more of an autobiography, and one has to get to Chapter 10 before the Sabres stories come into focus, and even further before the legend of Taro comes to life before the readers’ eyes.

Wieland’s recollection of the genesis of Taro Tsujimoto was that he was but one hand into the creation. And it all occurred during the 1974 NHL Entry Draft.

Back in those days, the draft bore little resemblance to the extravaganza that it is today. “The entire event was staged over the phone, with league commissioner Clarence Campbell running the proceedings and all 14 teams calling in their choices. In fact, we’d have to get through a round before the teams would even learn who was selected, then things would move on to the next round,” said Wieland.

So the draft that year had slowed to a crawl, and everyone in the Sabres war room was getting exasperated. And the prank of all pranks began to take shape. “I think it was John Andersen (Director of Scouting) who suggested that we pick just any player who isn’t draft eligible, just to gum things up further. I jumped right in, suggesting we make up a fictional player,” said Wieland. 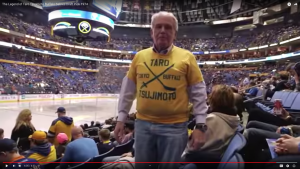 At that point, Andersen, for whatever reason, chimed in suggesting the fictional player would hail from Japan, since they did, after all, have professional hockey. Now they needed a name. “I passed by this store in Elma every day named ‘Tsujimoto’s Oriental Arts and Gifts’. Their owner was of Japanese descent and the inspiration for our player. Now we needed a common first name, and with some quick staff research, deemed ‘Taro’ as a common boys name. Coach Floyd Smith was on board and Imlach was almost giddy at the idea and gave his thumbs up. We now had our plan in place,” Wieland recalled.

The last step, a team name. “Katanas” was chosen, loosely translating to “Sabres” from Japanese. And when it was finally time for the Sabres turn, the team announced “Buffalo selects Taro Tsujimoto from the Tokyo Katanas.” Wieland even spelled out the name letter by letter for the league commissioner.

A bewildered Clarence Campbell repeated the name and affiliation and asked for further clarification. “The four of us in the war room back in Buffalo did all we could to suppress our laughter,” said Wieland as he began laughing while reminiscing about that day and how it all went down.

The prank went even further. Now Wieland had to send out press releases profiling Tsujimoto and the rest of that year’s draft picks, all others of whom were real, including Lee Fogolin who was selected 11th overall and Danny Gare, 29th overall. Both would become future NHL All Stars and today Gare’s #18 banner graces the rafters of the KeyBank Center.

The Buffalo News and other outlets presented Taro as a real individual. By the time training camp rolled along, trainer Rip Simonick even created a locker with sticks, skates, and a #13 jersey for Tsujimoto, warning other players and prospects that the guy was coming to take some player’s job away. Reporters and TV journalists asked plenty about this mysterious player from a faraway exotic locale, and Imlach would reply “I’m waiting to hear from his agent.”

There was never any formal announcement by the Sabres revealing the prank. Eventually, the players figured it out, and as the Sabres made their amazing run in 1974-75 all the way to the Stanley Cup finals, Simonick even kept appearances up, keeping the Tsujimoto cubicle prepped in the dressing room from time to time.

“After a while, everyone pretty much figured out that Taro was just a myth,” said Wieland. “But the legend lived on”. 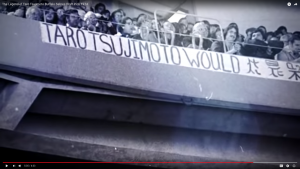 The team passed out bumper stickers to season ticket holders with their playoff tickets, reading “Taro Sez think Stanley Cup”, written partly in Japanese. Most prolific were a group of patrons, led by superfan Dave Hyzy, who became the “Phantom Sign Painters”. For just about every game, they would festoon the balcony rim at the Aud with a clever Taro quip which was often a play on words. “We loved those guys. They kept the legend going,” said Wieland.

Today Wieland still teaches communications and broadcasting part-time at St. Bonaventure University in Olean, but remains very much engaged with the team and its spirit even from afar. “Truth be told, I stopped watching much these past couple seasons, the games got hard to take,” Wieland admitted. “But I like what I see in these guys and definitely they’re moving in a better direction now.”

And if the Sabres actually win the Stanley Cup? “I’d be out there celebrating as loudly as any fan,” Wieland replied.

Wieland’s new book is available on Amazon. And for the many fans who are old enough to remember those halcyon Sabres days of the team’s inception, this coming Saturday will be “70s night”, against the New York Islanders. This will be the first of the themed decades nights that the team plans this year as part of their Golden Anniversary celebration.

Wieland will join his hire and former broadcast partner Rick Jeanneret in the booth to call the second period of action. It will be must see TV.

“Taro Sez: While the idea of Taro-like pranks to some may bring enjoyment, try any of this today and it will mean unemployment.”

Sayonara and see you in Stockholm. 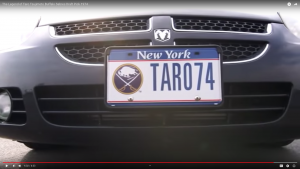