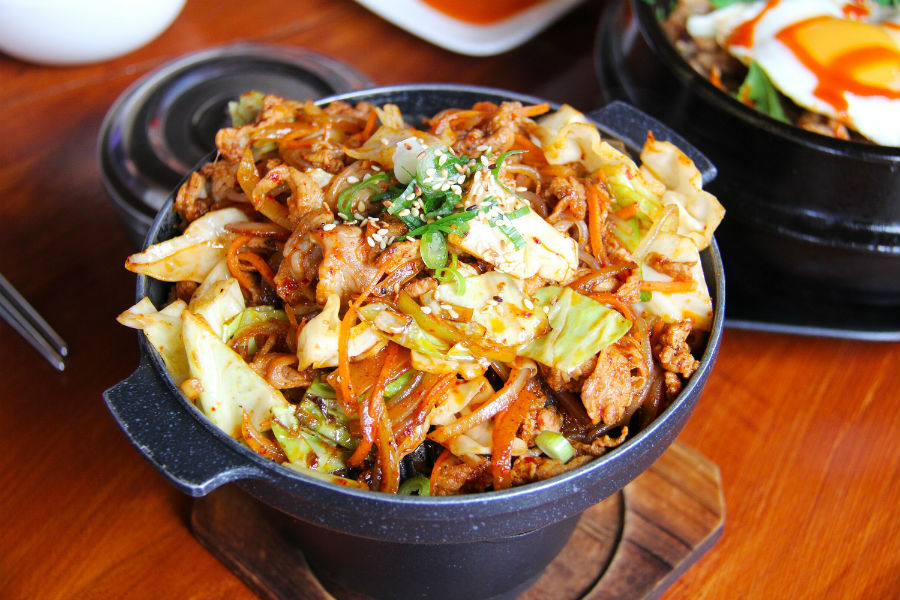 Korean cuisine has made a tremendous splash here in the United States, where foodie culture has encouraged a whole new generation of fine dining.

New York and Los Angeles have served as breeding grounds for inventive and beautiful new dishes that take traditional cooking techniques and concepts and update them for modern palates.

Leading the charge have been a handful of New York-based Korean restaurants: Atoboy, Atomix, and Jungsik.

Our guest today, Chef Suyoung Park, has worked with Atoboy as well as both the Seoul and New York locations of Jungsik.

Park built her culinary career from scratch, starting out as a Food Stylist then shifting focus to hands-on cooking and line work.

Park took a short break from her very busy schedule to chat with Artvoice about her personal culinary journey and the chefs who have inspired that journey.

What was it like when you started working at Jungsik? Was the experience intimidating at all?

My experience working here at Jungsik has been very insightful. I spent over four years as a Sous Chef in Jungsik Seoul and have been currently working in our New York City location for the past year. While it is the same owner and style of food, being here in New York really opened up my eyes to how influential Korean cuisine is to the world.

It has not been an easy journey, as both restaurants hold very high standards and the level of guest expectations continues to rise. That in itself is rather intimidating. Also, staying current and relevant while still having a clear identity and vision is a challenge for any chef.

Can you tell us more about your time at Ms. G’s in Sydney?

I worked as Chef de Partie at Ms. G’s in Sydney. I was mainly responsible for the hot line, which means that I covered the stations of the charcoal grill, wok, and oven. Ms. G’s introduced me to new ingredients that I didn’t have much experience with.

We used a lot of Southeast Asian ingredients like pandan, sambal, palm sugar, lemongrass, and a variety of Asian herbs. By mixing these exotic ingredients with condiments that I have a lot of experience with, like dwaengjang and gochujang, it really changed my way of thinking about how to make Korean cuisine evolve.

How important was your culinary education to your career?

I attended Chungkang College of Cultural Industries in Gyeongi-do, Korea. I finished an Associate’s degree in Food Stylist. So initially, my training as a cook was not based so much on classic techniques, but more on general cooking and making food look good. I worked as a Food Stylist for some time after that, but I found I didn’t enjoy my work and it didn’t agree with me.

Sometimes, I have mixed feelings about my education because I wish I could have gone into more detailed knowledge about cooking instead. Most of my culinary education has been on the job, and I have Jungsik to thank for that. I started at Jungsik when it first opened and worked from the ground up. I am fortunate to have had a lot of really talented mentors who have taught me well over the years.

What has been one of your most meaningful culinary experiences?

I believe that my most meaningful experiences as a chef was actually as a diner. More recently, I had the pleasure of attending a special collaboration dinner between Relæ and Atomix. It was so inspiring! There was a freshness and different insight into Korean cuisine that I had never felt before. That was very inspiring to me and made me want to learn more about Danish food. I think that chefs always eat to be inspired and experience a different philosophy and vision of food.

I always try to absorb and understand as much as I can every time I go out to eat. What is the chef trying to say to me, what is their story? I also really enjoyed my meal at Per Se as well. The entire production of deep-rooted classic food and perfectly orchestrated service made me want to work harder and be even more meticulous as a chef.

How important is it to communicate well with the rest of the kitchen staff?

Communication is one of the most important factors of a successful kitchen. Without good communication, everything will fall apart. From organization to teaching cooks, it’s essential to have good communication. There is a need for dialogue and checks and balances between the chefs and line cooks, as well as between the front-of-house staff. That’s the only way you can create a good working environment for all the staff as well as the restaurant.

Is there a type of cuisine you would like to learn more about?

I have always wanted to learn about French cuisine. I know that the foundations of classic fine dining cooking are based on traditional French techniques, which I have never learned. I am much more experienced with traditional Korean cuisine and Asian food in general. However, I want to learn French cooking techniques and get more practice. I strongly believe that a French foundation will help me to create new dishes with a Korean twist.

Are there any contemporary chefs who really inspire you and your work?

I think the chefs I most admire are the ones that I have worked for. The chef that has had the most influence on my career is Chef Jungsik Yim. Chef Yim is the first person I know of to start the “New Korean” food movement. This is so important to all Korean chefs. Korean food is often very comforting and delicious, but not always beautiful and refined. It’s very bold, with a lot of spice, garlic, and onion. So when he started Jungsik, it was so new and innovative for Korean cuisine. Chef Yim also has an amazing palate, he travels all over the world and is influenced by many different cultures, which you can also see in his food.

This has shaped my philosophy on creating dishes and also exploring different cuisines on my own. He also has pushed me to constantly be better and presented me with many opportunities to grow as a chef.

The other chef that I respect and admire is Chef Jung Hyun Park, from ATOBOY and Atomix. With Chef JP, he started off as my Chef de Cuisine at Jungsik, where I learned many different techniques and new types of flavors. He always pushed me to make better food. I also worked with him at ATOBOY, where he took “banchan style” dishes to a new level. Banchan is such an everyday item, so to see it elevated and presented in new ways is great.

With Atomix, I believe he is also doing something really beautiful. It’s the next step, the new generation of the Korean Food Movement, taking traditional items or everyday dishes and really celebrating the culture of Korea.

Korean cuisine has evolved so much because of these two chefs. I respect and admire them very much, and hope that in the future I can make similar contributions to Korean cuisine.

Four Activities You Can Do in California
Is Bouldering a Good Workout? – Questions from New Climbers