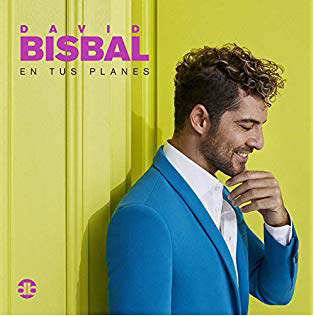 David Bisbal premieres his most anticipated album “EN TUS PLANES” and video today, directed by Willy Rodriguez. This album combines different styles that David Bisbal has portrayed throughout his career – from the Latin rumba to the most heartfelt ballad

David Bisbal invited and worked with artists from all over world to expand the range and universal appeal of his music like never before. He has been working since 2018 on this album with composers such as  Andres Torres, Mauricio Rengifo, Andy Clay, Claudia Brant, Conchita, Vega and its production counted on the talent of Áuero Baqueiro, Luis Salazar, Pablo Cebrián, and Ludovico Vagnone.

“EN TUS PLANES” has 9 new songs as well as some of his latest hits released in the past few months: “A partir de Hoy” (Since Today) with Sebastian Yatra, “Perdón” (Sorry) with Greeicy, “Bésame” (Kiss Me) with Juan Magán y “Abriré La Puerta” (I’ll Open the Door) with Alejandro Fernández.

“The best thing about this album is having the chance to work with colleagues who have enriched me with their musical wisdom and generosity. Now it’s for my fans, who have stood by me unconditionally, to enjoy it” – David Bisbal

It’s been three years since the release of ‘Hijos del Mar’ (Children of the Sea) and David Bisbal has achieved more in that time frame than any of his peers, and he’s considered one of Spain’s most accomplished artists given his global appeal, resonance and unprecedented vocal talent. He has received 11 diamond album certifications for album sales throughout the course of his career. As UNICEF’s ambassador, he has been present at the European Parliament alongside Queen Matilda of Belgium and the president of the European Parliament, David Sassoli during World Children’s Day and recently released “Mucho Más Allá,” one of the principal songs for the film FROZEN 2.

In 2020, David Bisbal will embark on a world tour where he will travel all over Spain, cross the Pyrenees to also perform in different European cities, and make several stops throughout Latin America.

The tour for EN TUS PLANES has announced the following dates: