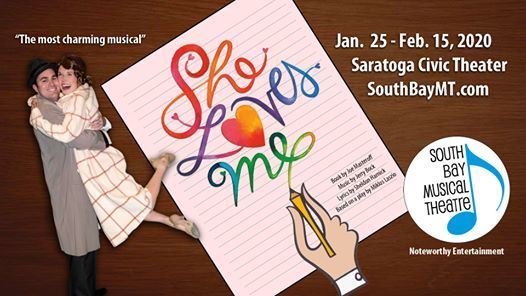 South Bay Musical Theatre (SBMT) is pleased the announce the full cast and creative team for the Company’s first 2020 production, the charming musical comedy SHE LOVES ME. Described by The New York Times as “a bonbon of a musical” and a “tasty tale of love lost and found at the workplace,” the original Broadway production of SHE LOVES ME was nominated for five 1964 Tony Awards; the show has since enjoyed two successful Broadway revivals, in 1993 (Winner, Tony Award “Best Revival of a Musical”) and 2016. SHE LOVES ME features a book by Joe Masteroff, music by Jerry Bock and lyrics by Sheldon Harnick. It is based on the play Parfumerie by Miklós László (which has also served as the basis for the films The Shop Around the Corner, In the Good Old Summertime and You’ve Got Mail).

SBMT’s production of SHE LOVES ME will be directed by Martín Rojas Dietrich, with music direction by Joseph Kelly, vocal direction by Daniel Hughes and choreography by Jillian Toby-Cummings. SHE LOVES ME will perform from January 25 – February 15, 2020 at Saratoga Civic Theatre (13777 Fruitvale Ave, Saratoga, CA 95070), with a press opening on Saturday, January 25, 2020 at 8:00 p.m. First-nighters are invited to stay for a champagne toast following the opening night performance. Evening shows start at 8 p.m. while matinees (Sundays and the closing Saturday) start at 2:30 p.m. Adult tickets are $29 – $39. There are $2 discounts for seniors 65 years or older, and $20 tickets for students and children. Tickets may be purchased online at www.SouthBayMT.com or by calling (408) 266-4734.

“SHE LOVES ME is widely considered to be a perfect musical,” says SBMT Executive Director Sara K. Dean. “It’s a charming, romantic comedy the whole family will enjoy—a tale of love triumphing over animosity. We are blessed with a stellar cast and a highly talented production staff who are turning this timeless tale into a singing-and-dancing love letter to the South Bay community that rises to the level of quality our audiences have come to expect.”
A warm romantic comedy with a touch of old-world elegance (from the bookwriter of Cabaret and the songwriters of Fiddler on the Roof), SHE LOVES ME is set in a 1930s European perfumery. We meet feuding shop clerks Amalia and Georg, each of whom responds anonymously to each other’s want ad. The score includes songs like “Dear Friend”; “Vanilla Ice Cream”; “A Trip to the Library”; and, of course, the heart-warming title tune. What better way to celebrate Valentine’s season with your sweetheart than with this Broadway favorite?