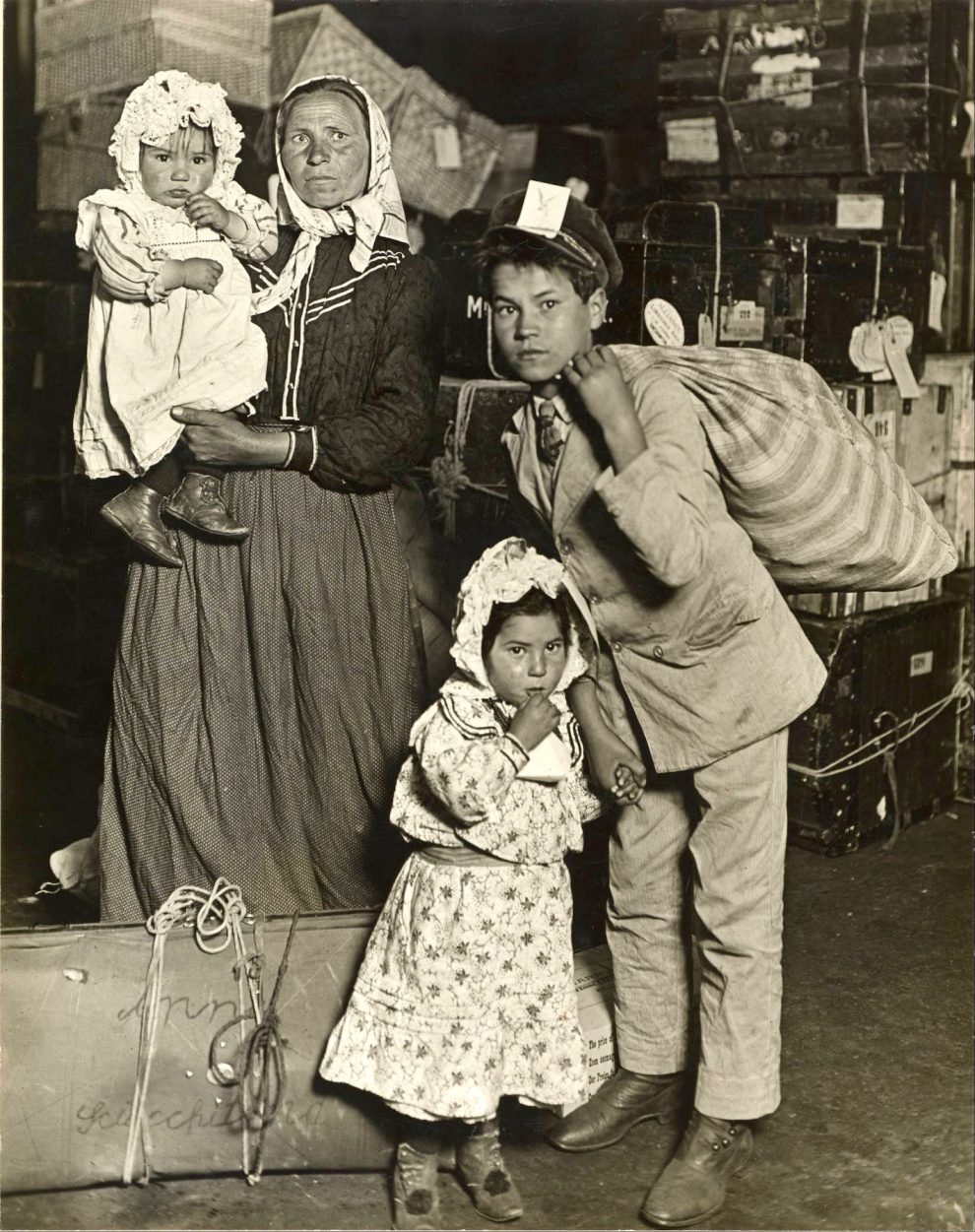 More than 12 million immigrants passed through Ellis Island between 1892 and 1954 – with a peak of 1,004,756 entering the United States in 1907 alone, and most were Italians. In fact, most Italian immigrants arriving at Ellis Island in 1907 were processed in a few hours.

“It varied from person to person, but for 80 percent, the process took a few hours, and then they were out and through,” he says. “But it could also take a couple days, a couple weeks, a couple months or, in some rare cases, a couple of years,” writes Vincent Cannato In American Passage: The History of Ellis Island.

“At the end of the day, less than 2 percent are rejected. The process was not really to keep lots of people out; the goal was really to sift out the wheat-from-the-chaff and sift out those who ‘undesirable.’ Those who passed inspection were simply sent on their way with no official paperwork,” writes Cannato.

“It’s hard a thing to wrap your mind around because we live in such a bureaucratic world today.”

In 1907, a passenger manifest document was created from the point of departure, which included each passenger’s name. According Barry Moreno, historian and librarian at the Ellis Island Immigration Museum, the process went something like this:

“Before the ship was allowed to enter into New York Harbor, it had to stop at a quarantine checkpoint off the coast of Staten Island where doctors would look for dangerous, contagious diseases such as smallpox, yellow fever, plague, cholera and leprosy,” writes Moreno in History.Com.

“First- and second-class passengers (billionaires, stage stars, merchants, businessmen and the like) were interviewed and allowed to disembark once the ship docked. In 1907, no passports or visas were needed to enter the United; no papers were required at all. This was a paperless period. All you had to do was verbally give information to the official when you boarded the ship in Europe and that information was the only information used when they arrived,” further writes Moreno.

“The passengers were put aboard small steamboats and brought to Ellis Island. First up was a medical examination by military surgeons. The doctors had to know a few words of instruction in many languages, and only 10% were detained for further examinations or questioning,” writes Moreno.

Those that were detained were fortunate to get the help from the Italian Welfare League, tracing back to its beginnings in the resettlement work of the American Red Cross’s Italian Committee at the end of the First Word War. At the time, thousands of Italians had just returned after having fought in the Italian Army during the war, Italy was an ally of the Americans in WWI.

“By the late 1920’s, a branch of the Italian Welfare League was opened on Ellis and held a unique position on the island – it had become the only aid society exclusively assisting Italians. At Ellis Island, the League helped Italians in trouble, particularly detained aliens and immigrants who were being held under warrant or deportation. America’s immigration laws and policies were laden with bureaucratic red tape which led to thousands of people temporarily detained, or worse, being held for special inquiry investigations and hearings,” writes Moreno in The Story of the Italian Welfare League.

“From the 1920’s through the 1940’s, the League also stretched out a helping hand to alien nationals who have lived in the United States for a while but had fallen on dark days and were no facing deportation for having violated one or more of the immigration laws,” writes Moreno.

“Some were being expelled because they have been convicted of having committed a crime, some for having fallen into a life of pauperism and beggary, others for not having a valid Italian passport and having entered the United States illegally, and still others for having committed one of the crimes of moral turpitude, such as white slavery prostitution, or giving birth to illegitimate children. The League provided advice, winter coats, clean clothing, and sympathy,” writes Moreno.

The Italian Welfare League permeated into the community through immigrants who had succeeded in making a successful transition into American life as advocates and translators for those Italian immigrants just arriving from Italy, a commendable model of Italians-helping-Italians; out of necessity, it worked, remarkably.

High school educated, first-generation, young Italian males with service and union jobs became a resource and advisor to Italian families: a cultural and collegial sharing, creating valuable and lasting relationships in the community. The post, World War II spirit to become helpful and honorable sons was embraced and adopted by progressive-minded, Italian families.

Marciano’s father, Peirino, would repeatedly urge his oldest son, Rocco, fueling him emotionally to do something “special” and ridding himself of oppressive factory work and imminent poverty.

What Marciano feared most was poverty for his parents, especially, and he felt, as the oldest and good son, compelled to lift his family out of poverty forever; he wanted to make his immigrant parents, Peirino and Pasqualina, proud, family first: the most important Italian mantra.

In the 1940’s and 1950’s, Lombardi worked with his father, Enrico, in the butchering and meat distribution business in Brooklyn, NY. Enrico worked tirelessly and Vince followed, knowing full well that hauling around 200 lb. slabs-of-beef, in-and-out of walk-in coolers routinely, was not kind of work he wanted to do for the rest of his life.

At first, these first-generation Italian greats obeyed and followed their fathers into the trades, working side-by-side with them and realizing this was not the end game and success they wanted for themselves and parents. Their fathers led the way with exemplary work habits, modeling vocational readiness and applications while striving for perfection; no short cuts were allowed.

“You don’t do things right once-in-a-while. You do them right all-the-time,” Papa Ernie Lombardi would shout at a young, aspiring Vincent. This was a commonplace mantra articulated in most Italian households during that time.

Obediently, these Italian sons did those grueling jobs while their fathers imparted the intangible qualities that would eventually translate into their great athletic efforts on the playing fields and arena, as they would later fortunately experience in life: DiMaggio hated cleaning his father’s fishing boat; Marciano hated the oppressive conditions of factory work; and Lombardi had a huge disdain for hauling around 200 lb. slabs of beef, but they accepted the grind and did the work, commendably.

“Italian sons were supposed to suffer shame and guilt for not following their father’s ways,” relevantly writes Andrew Rolle in his book, The Italian Americans: Troubled Roots. For Italian sons, following papa was often the only right thing to do, or they would face ‘enstrangement’ from the family forever.

These first-generation Italian sons were very special in their efforts and determination, overcame the odds against them, and were encouraged to be trailblazers in competitive, physically-demanding sports like football, baseball, boxing, wrestling, and even weightlifting: They intuitively knew they possessed the physical skills for sports but lacked the academic abilities needed to go farther in the white-collar professions.

These Italian sons very much wanted to forge their own distinct identity, helping their families see, experience, and benefit from the “American dream.” They succeeded in unimaginable ways for all to appreciate, emulate, and retell for years to come.