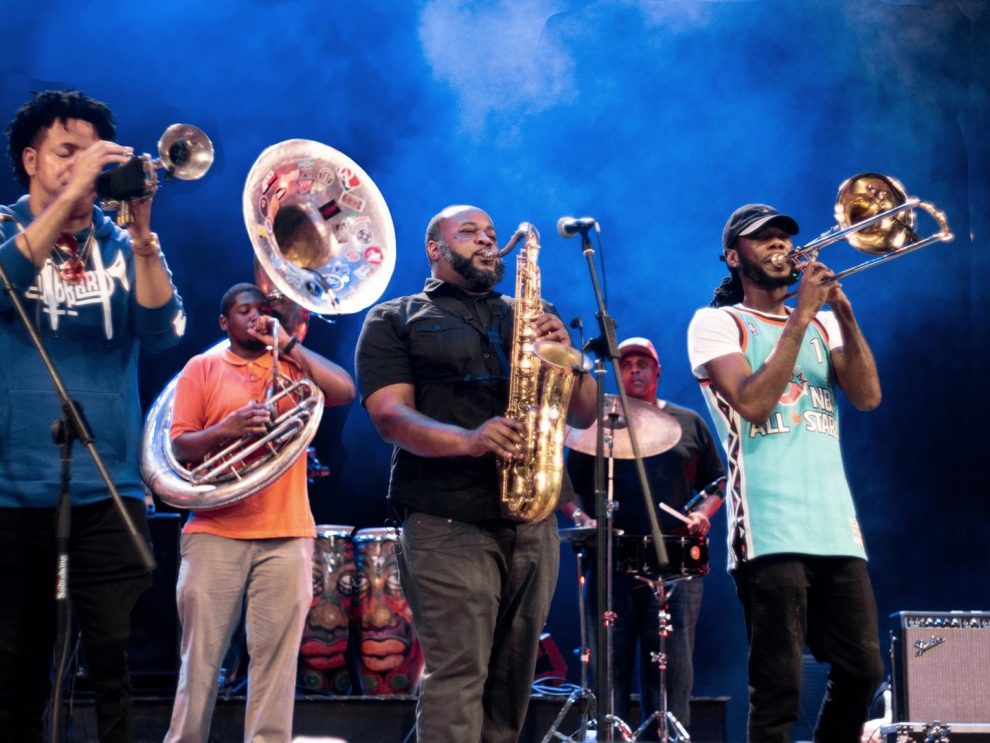 Brass sensation The Soul Rebels, kick off their Poetry In Motion Tour in support of their new album. The foot-stomping eight-piece collective are getting a lot of attention and video play for the single “Greatness”, which was tapped by ESPN as the official soundtrack of the 2019-20 college basketball season.
On May 1st, they will also be playing at the famous New Orleans Jazz & Heritage Festival 2020 which will be featuring the debut of new supergroup, Wu-Tang Clan featuring The Soul Rebels. The lineup for that festival is mind boggling including acts like The Who, Lizzo, Foo Fighters, Black Crowes, Lenny Kravits, Elvis Costello and dozens more.
The Soul Rebels are riding high receiving national attention with recent performances with Katy Perry and DMX, and featured on NPR’s Tiny Desk series, a debut late night TV appearance on The Late Show with Stephen Colbert, and a headlining set at the TED Conference.
They also just returned from a recent trip to Havana, Cuba playing alongside Tank and The Bangas, Trombone Shorty and Cuban superstar, Cimafunk. The New York Times wrote that: “Music has long formed a cultural bridge between Cuba and the United States regardless of the state of political relations, with Afro-Cuban rhythms like the habanera feeding into Afro-American music as early as the 19th century.” And Marcus Hubbard of the Soul Rebels told Rueters, “We are hoping that with us coming over, this can open up the door to more collaborations and things the U.S. and Cuba can come together on”
The Soul Rebels started with an idea – to expand upon the pop music they loved on the radio and the New Orleans brass tradition they grew up on. They took that tradition and blended funk and soul with elements of hip hop, jazz and rock all within a brass band context.
The Soul Rebels released their latest album Poetry in Motion in October 2019. The album has been featured in The New York Times, Billboards, Ebro’s Apple Music Podcast, Forbes and Okayplayer. The album is packed full of guest appearances including Big Freedia, PJ Morton, Tank of Tank and The Bangas, Branford Marsalis, Kes, Trombone Shorty, Mannie Fresh and Matisyahu among others.
The upcoming tour will take the band across the country including the performance in Buffalo.