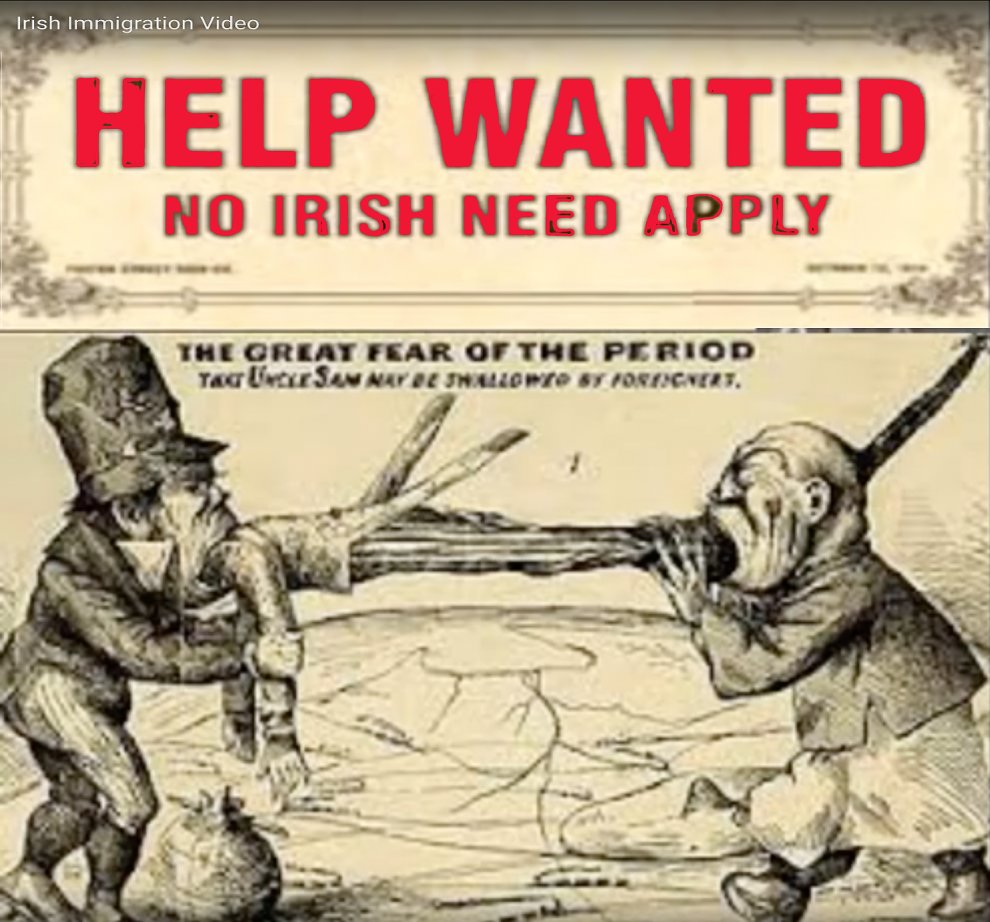 Mass immigration changed the face of America forever. The tidal wave of immigrants coming to America from Europe (1880-1910) transformed an English-dominated, American culture into a melting pot of refugees and renegades in search of new opportunities and a new way of life.

“When Irish, German, Italian and other European immigrants came to the United States during a wave of immigration at the turn of the 20th century, captivated by the promise that all immigrants can be transformed into Americans, a new alloy forged in the crucible of democracy, freedom, and civic responsibility,” writes Gary Marx in Sixteen Trends: Their Profound Impact on Our Future.

For the immigrant Italians and Irish from Europe, the massive surge into America’s port cities was far from a welcoming experience, many hungry and homeless, leaving thousands of the early Irish wondering and asking themselves: Is America really the land of opportunity?

The treatment of Irish immigrants was especially detestable. Irish immigrants fought back and were resilient despite the common culture’s efforts in 19th century America to shun and discriminate against the early Irish Americans, calling them savages and drunkards and reducing them to social outcasts. Likewise, the treatment of Italian immigrants was just as disturbing, in many cases, as Italians shunned and discriminated against and were callously called ‘dagoes,’ ‘wops,’ and ‘guineas.’

By necessity, Italian and Irish immigrants became fighters for opportunity and fighters against oppression. There were no other options for the Italians and Irish in early America.

In particular, the story of Irish immigrants was a treacherously enduring one that would eventually become a triumphant one, but not without remembering the pains from the past. The Irish were the very first big wave of immigrants coming to America, after the potato famine in Ireland in the 1840s.

“No Irish need apply, a famous folk song of the common school period, referred to rental and employment signs telling Irish Americans they were not welcomed as residents and workers,” writes Joel Spring, accurately depicting the malicious treatment of Irish immigrants in the late 1800s in The American School: A Global Context from the Puritans to the Obama Era.

Those were desperate times, requiring desperate measures, and survival meant everything. In fact, to gain desirable employment in a union shop, for example, many Irish Americans renamed themselves to English-sounding names, often omitting the “O or Mc” at the beginning of their names and consequently hoping to mask their Irish origins.

Many immigrant Italians changed their names too to mask their Italian identity to gain union jobs and membership. In one instance, at a Niagara Falls factory in 1959, an applicant with a last name of Benevenuto changed his name to Benton to secure union employment. This was an example of one of many deceptive tactics used back then: a commonplace practice.

When the Italians began arriving in New York City in large numbers around 1880, they faced fierce competition from the Irish who resented their working for less money and longer hours. In those days, they fought over jobs or turf, and when they jockeyed for power in the church, in politics, in unions, and in civil service.

“They clashed in parishes, workplaces, neighborhoods, and politics. But over time, these same arenas came to unite them. The Italians had no choice but to deal with the Irish, who were union their union leaders, foremen, schoolteachers, cops, and ward heelers…

“The Irish had to deal with the Italians if they were to raise the status of the Catholic faith in Protestant America,” writes Paul Moses in The Love-Hate Story of New York’s Irish and Italians. After decades of literally rumbling and constantly competing, Italians and Irish began working together cooperatively as partners in community projects.

Irish growing numbers or demographics, as a group, helped as the early Irish gained eventual success in the workplace, especially in the labor and trade union movement. Large Irish populations in big cities like Boston, Chicago, and New York paved-the-way for the election of Irish candidates to public offices, launching the genesis of Irish political organizations in municipalities. Italian city planners, engineers, builders, and tradesmen benefitted in the remaking of a new America.

“Yet, in the years after World War II, the church played a key role in bringing the Irish and Italians together, and to the altar in marriage. This is the very American story of the Irish and Italians: when people from once-warring tribes mingle and get to know each other as equals, the social barriers fall away,” writes Moses.

After World War II, the changing, cultural attitudes are depicted in the Oscar-nominated film, Brooklyn, when in character, Tony Fiorello, an Italian kid, brings Ellis Lacey, a young man of Irish ancestry, to his home for dinner: This is a magically-produced, love-hate story of New York’s Irish and Italians.

“We don’t like Irish people,” blurts out his little brother, Frankie. Frankie then offers a decades-old explanation about the Irish guys in the neighborhood beating up the Italians while Irish cops looked the other way

Observably, the Irish displayed incredible organization and systemic delineation of tasks cultivated great political successes. “The Irish did not simply take over the conventional apparatus of politics. They transformed American municipal politics. They changed the class consumption of municipal government, putting the reins of power in the hands of men who had risen from the working class,” writes Thomas Sowell, in his 1981 book, Ethnic America.

As ethnic groups, Irish and Italian Americans once detested each other and remarkably changed all that for the good of America: They deserve tremendous credit and recognition for their spirit and determination to succeed in a hostile new world that they believed from the onset was going to be the land of opportunity.

They (the early Italians and Irish) survived, adapted, and succeeded, and today’s America was and continues to be better for it. Early Irish and Italians found the Catholic faith and intermarriage as the best blessed bridges, the conduits, to accepting and understanding each other better, curing all social maladies and for all groups and peoples to emulate.

Should pregnant women publish nude photos?
The Problem with West Virginia Forced to Teach Bible Classes in All Public High Schools by James A. Haught
Comment