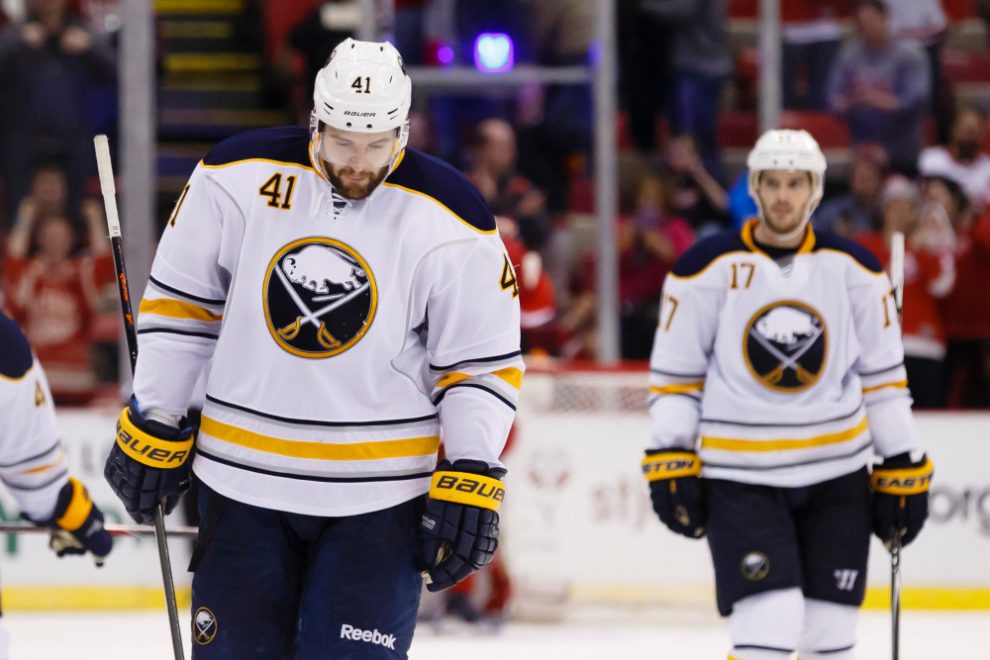 That February weekend back to back set down in Pittsburgh and then home with Winnipeg was fun, wasn’t it?

In the span of a magical thirty hours, the Sabres traveled down to PPG Paints Arena in Pittsburgh and stunned the Penguins on their home ice, for the second time this season. Then the team came home for a Sunday matinee against Winnipeg. Fans delighted in watching inspiring shutdown hockey in the third period, beating the Jets 2-1 and giving Rochester Amerks callup goaltender Jonas Johansson his first NHL victory.

How dominant was the Sabres effort in that game?

While most teams go into a defensive shell late when preserving a one goal lead, the Sabres stayed on the attack mode throughout the final ten minutes, shutting down the Jets and keeping them penned in their zone. When Winnipeg finally got possession in the dying seconds and managed to lift their goaltender for an extra attacker, they actually iced the puck, forcing a faceoff in their own zone.

Since player changes are not allowed by the offending team on an icing call, the Jets were forced to take that faceoff without their goaltender in net, something that happens very rarely in hockey.

Amidst the backdrop of all this was the looming NHL trade deadline that following day. The Toronto Maple Leafs and Florida Panthers, two close competitors in the race for the playoffs, were reeling.  The Sabres had just crushed the Leafs at home a week prior, with the arena packed with Leafs fans, which swamped the Buffalo home contingent like never in the history of this rivalry.

All of a sudden everyone was taking a fresh look at the standings. Six points out, Eight points out. Game in hand. Players in the locker room doing the happy talk. Get us some help, (General Manager) Jason Botterill, and we’ll compete.

Botterill did just that.

He acquired forwards Dominik Kahun and Wayne Simmonds from New Jersey, with Simmonds providing the team some much needed toughness. More importantly, he shed two players from the roster, both largely ineffective and both requesting trades out of the organization. Evan Rodriguez and Zach Bogosian were no longer Sabres.

And off they went, on the road for four games in eight days, an opportunity for team bonding, an opportunity to make a bold statement that this team is ready to win now. That this team will present thrilling playoff chase moments for the final eight home games of the schedule.

It was all just another soul crushing head fake.

The Sabres went 0-4 on the road trip, and essentially took themselves out of any playoff race this season. The losses were all exasperating ones… defensive breakdowns allowing opponents to score goals in bunches, goaltending lapses at the worse possible time, the team playing catchup at the end of each game and coming up short. Empty net goals.  By the end of this trip there were scenes of Jack Eichel slumped in his locker cubicle, still fully dressed in his uniform, and staring blankly into the abyss. There were players pontificating that the team still has pride, still wear the uniform, and will be there to compete. Every game down the stretch. But it all rings hollow.

Assuming he is still in charge after this season comes to its conclusion, Botterill will have a plateful of decisions to make. He has a cadre of underperforming players that just need to go…Larson, Girgensens, Frolik, Vesey. Can he get anyone to take Kyle Okposo off his hands? He and coach Ralph Krueger need to address the penalty kill, the worst in the league. Can a healthy Victor Oloffson and a rejuvenated Jeff Skinner goose up the anemic offense?

There have been sparks of brilliance, of memorable games, winning streaks and runs of stellar play. The good bones are there if this team is willing to rise to the challenge.

Meantime, Sabres season ticket holders are getting thick envelopes in the mail as this column is being published. Playoff invoices for rounds 1 and 2? Nope. Instead, season ticket renewals have gone out, the earliest ever, with a commitment for renewal due by April 22.  In the midst of this information and the usual happy letter by long time Sabres ticket executive John Sinclair is a salad of thirty, yes thirty, ticket price categories on a vastly revised seating chart.

Fans and interested stakeholders wanting to see the chart have to hunt for it on the team’s website, but for many season ticket holders, those holding premium locations in their old price category are now placed in the least desirable seats in a new category, and have to swallow a box car price increase. Even the upper reaches of the 300 level command a highly unaffordable price point to those looking for family friendly pricing.

“Hockey Heaven”, as former president Ted Black  once said? Have a happy March as fans crack open a $14 can of Delaware North’s Bud Light, sway to the music of DJ Milk, and belch out a couple of “Eeyyy! Eeyyy!” chants with the esteemed DJ.

There is this… a free cup of Tim Hortons coffee with the coupon in the program, provided the Sabres score two goals. That’s what Hockey Heaven has come to in the 716.

The popular Sabres bad boy from the 90s era ran into legal troubles during and after his playing career, engaging in domestic violence disputes with this former wife at their home in Getzville. A subsequent DWI arrest where he was attempting to drive his vehicle on only three wheels ended with his termination from a lucrative media assignment with ESPN.

This past Monday, Barnaby was charged with public intoxication and assault at a bar in downtown Nashville. He was involved with an altercation with other bar patrons and then allegedly choked a bouncer.

Barnaby was released on $6000 bond and will answer the charges in court on March 27.

If you’re feeling lucky and if you are located in the UK you can find the best portals to bet on Ice Hockey games at BetCrazy.co.uk.