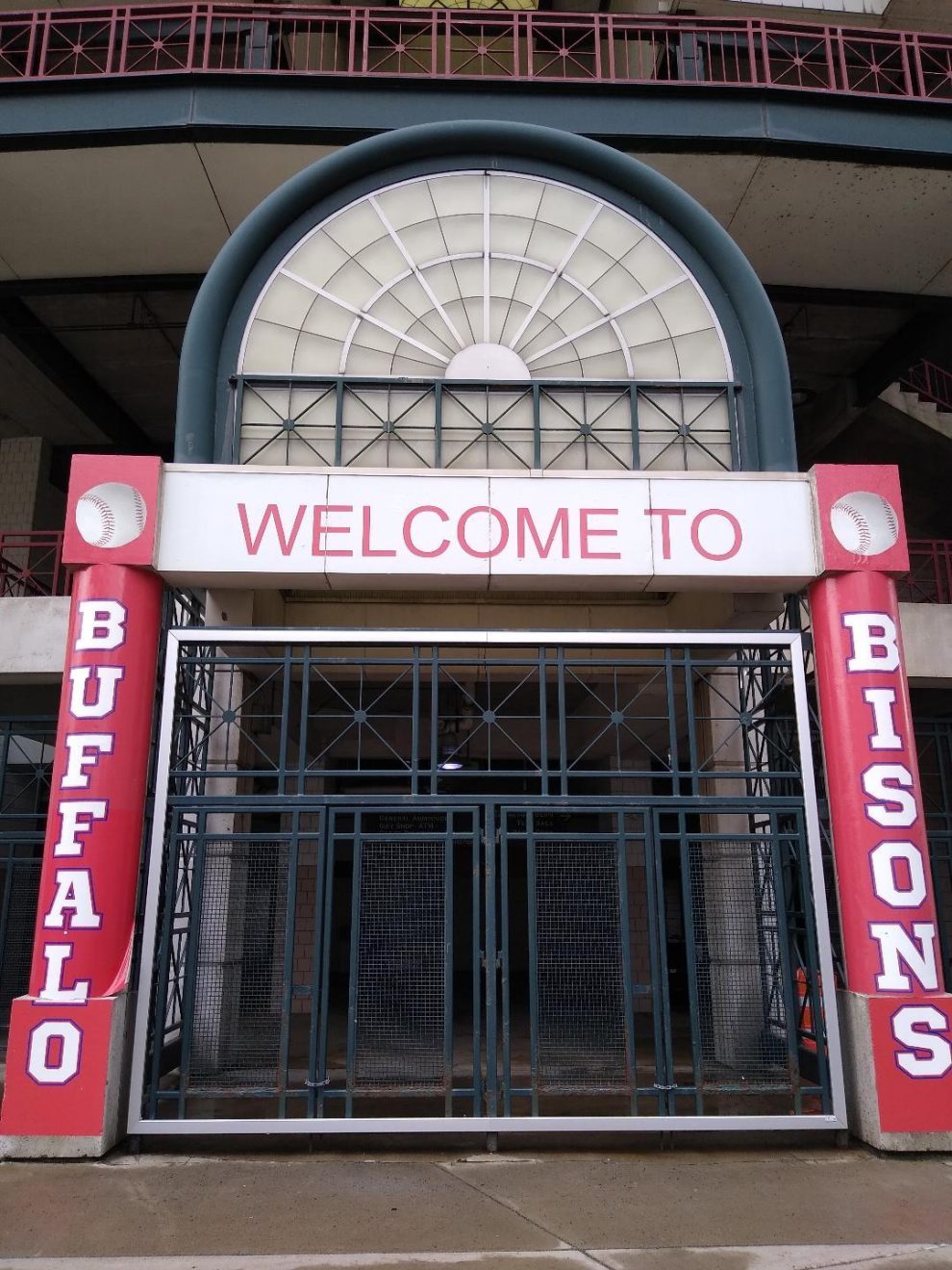 Bisons baseball on hold as society comes to a screeching halt

The calendar is turning to April. It’s been a mild winter and the spring flowers and hostas are already pushing out of the ground. Major League Baseball was planning on their season opener this past Friday, with Minor League Baseball, including the Buffalo Bisons, set to follow.

The Bisons had already gone through their traditional offseason exercises, programs and plans. New Manager Ken Huckaby was introduced to the Buffalo community in January. The team has held auditions for anthem singers, put out the call for seasonal employment and internship opportunities, sent out season ticket renewals, and things were stirring at Sahlen Field, the downtown ballpark, as plans for spring cleanup and field preparation were well underway.

For the Buffalo Bisons, for baseball, for all of organized sports, it all came crashing down on Wednesday, March 11. That night the NBA’s Oklahoma City Thunder abruptly cancelled their game just a few minutes before tipoff. Within the next 24 hours, NCAA basketball tournaments in preparation for Selection Sunday and March  Madness were also shut down, the NBA and NHL suspended their seasons, and across the world organized professional sports came to a screeching halt.

At this point, nobody knows when it will all be back. And when sports do come back, it could be a vastly different world and entertainment experience than we could have ever imagined.

Sprague is no stranger to the Bisons, having joined the team back in 2002 as an intern, and in recent seasons has served as Director of Sales and Assistant General Manager. He becomes just the third General Manager in the team’s modern era and fills some very big shoes. Mike Billoni was the first person in that role, overseeing the team during the team’s promotion to AAA, new ballpark construction and then the team’s nascent push for a MLB expansion team. Then Mike Buczkowski, who came from the team’s communications department and has provided a steady hand for much of the past quarter century.

“Once we get an all clear signal, we would need time to get the field ready, get the ballpark ready, and be in position to host thousands of people, but at the same time, don’t do too much because we really don’t know when were going to start. And if we clean this area or something, then have to wait another month, then we have to do it all again. So it’s a tricky, tricky thing to navigate right now,” said Sprague.

The front office is working mostly from home. The ticket office and team store are shuttered. “We have the immediate necessary people at the stadium right now. We have to have an engineer there 24 hours a day. Then we have our ballpark operations manager who has to be there in case something happens. So just essential people to watch over the overall maintenance of the building. At some point our groundskeeper has to go over to cut grass and do field maintenance. If we let too much go it will be that much harder to get things ready. It’s really a delicate dance to do enough but not too much,” said Sprague.

The team is sharing information with peer teams in the International League as well as with the Toronto Blue Jays, the Bisons’ parent club. Much has to do with what might be the new normal in terms of extreme sanitation practices that will have to be applied to the stadium, food service areas and customer contact points especially. “We have to look at not only what we will doing with the facility between games, but also during games in terms of keeping our fans, our staff and our players safe.” Sprague insists that with the teams all of the sports community is in this together.

Sprague discounted the notion that some minor league teams may not make it through this shutdown, and might become insolvent, the same fear that has befallen many a business enduring a mandatory shutdown and loss of their revenue stream.

“I like to think of myself as the eternal optimist and hopefully just reading the news and watching the news and there could be a June startup we could get a season in. We’re fortunate that we’ve got the Riches (team owners Bob and Mindy Rich) who have the commitment and the financial ability to weather this storm. But when it comes to other teams, yeah there could be some danger.”

The public thinks of professional sports franchises as moneyed institutions and cash cows, with never ending stories of huge players contracts, more and more palatial stadiums, and rich broadcast deals. “Minor league baseball teams are more like small businesses,” Sprague countered. “Our players and field personnel are paid for by the parent club, but everything else is on us, and our goal is always to keep the cost of tickets and concessions affordable and fan budget friendly. We’re doing everything we can do right now to raise revenue and shave expenses. So we have to try to run things like any small business.”

Sprague doesn’t anticipate any particular issues with international travel, being one of the few teams in minor league baseball with a parent club in Canada. “We anticipate border crossing issues to get back to normal by the time we’re ready to play. If there’s still a quarantine involved with people going back and forth, that’s something the Jays will have to address.  Hopefully by then it will be back to business as usual. We shall see.”

Longtime Bisons Public Relations Director and now new Assistant General Manager Brad Bisbing says that when baseball does return to Sahlen Field, it will be a particularly joyous occasion, perhaps the most memorable one in the storied history of the downtown ballpark. “People will want to be part of a community celebration and just to be together again. Any opening day is so special because it’s been six or seven months since you’ve seen people. It’s the fans you see for the first time.  You look forward to reuniting. It will be that much more special to share stories and laughs and get back to enjoying baseball.”

Sprague agrees. “It will be an opening day celebration that will be memorable. People have been cooped up for so long. Even if that day were tomorrow fans would come out in droves just to be outside and part of a community experience. We will celebrate those who took care of us in our darkest hours, and perhaps it will give new perspective that opening day is so special. A chance to shake someone’s hand and give someone a hug and think how lucky we are to be here and life is getting back to normal.”

The team is still the Buffalo Bisons, and their owners are the Riches. But once baseball does resume, it may be a totally different experience in a different world than anyone can really comprehend right now. On the field, new manager Ken Huckaby and new field personnel that will be trying to end a playoff drought that stretches all the way back to 2005.  New front office leadreship run by Sprague and assisted by Bisbing, perhaps presenting a vastly altered and enhanced gameday experience than fans have encountered in the past. And of course, heightened alerts and safety practices that all people will be dealing with in a post COVID-19 world.

“No matter what happens, no matter how long it takes, we’ll be ready for you once those gates open up and we’re going to embrace you with open arms. More than anything else, we miss our fans and can’t wait to see you at the ballpark,” said Sprague in a direct message to the team’s many supporters.

“Play Ball”.  Hearing those sweet words will be every bit that much sweeter.