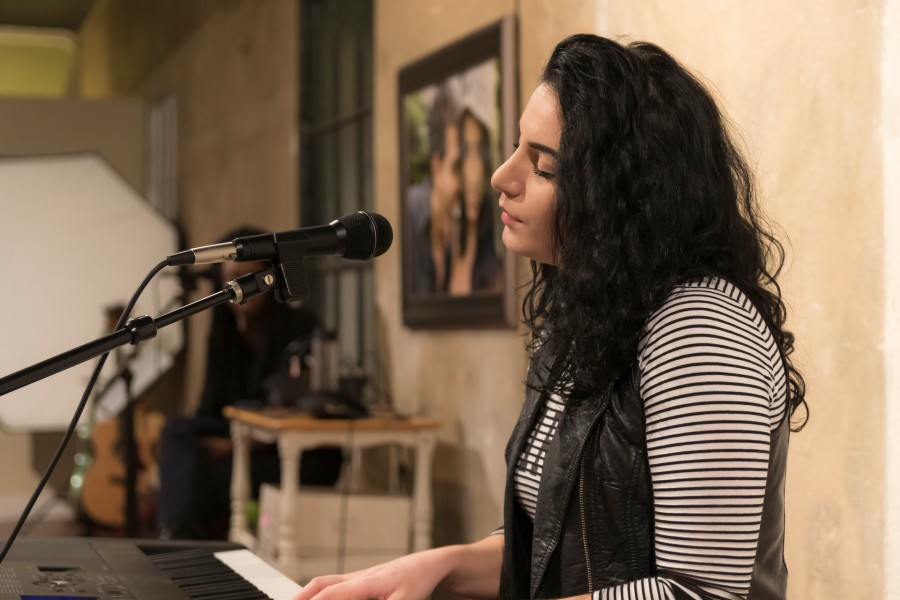 Many of the physical instruments we use today can trace their roots back hundreds, if not thousands, of years. As humans, we’ve always found ways to create music, regardless of culture and creed.

But the very first instrument, one that we still use today, is the human voice.

Professional singer-songwriter Lyusi Simon has a deep respect for the voice as an instrument and the long history of vocal performance throughout the ages.

Currently based in Los Angeles, Simon has established herself as a major player in the music industry, performing around the world, including performances with Mister X, Hezekiah Walker, and U2, among many others. She also teaches aspiring vocalists and has immersed herself in the world of studio recording and engineering.

Simon set some time aside for an interview with Artvoice, and together we tried to cover a number of different topics surrounding the life of a professional vocalist. Simon shared stories about the early days of her career and what her artistic outlook is like now that she’s found success. You’ll find the full interview below.

Did you sing a lot as a child? Did it take a while before you started recording yourself?

As a child, I used to sing a lot but never thought I wanted to be a singer. I always loved music in general. A family friend, a conservatory graduate, noticed I had a musical ear and told my parents I should start playing musical instruments. I didn’t start playing right away.

Once, I had a playdate with a friend and he had a synthesizer and I immediately fell in love with instruments. I borrowed it and kept annoying my parents.  On New Year’s, I got a present from our Russian Santa Claus who clearly loved me a lot because it was a brand new Yamaha synthesizer.

I started my lessons with that family friend and he suggested I join the band as a drummer. I was rocking it as a seven-year-old drummer, occasionally doing background vocals as well.

We’d like to hear about the first time you considered pursuing vocal performance as a career?

My first time singing and realizing I want to be a singer was a complete unexpected alignment of events.

The main singer came sick that day and refused to sing. I stepped up and ended up singing while playing drums. That was my very first concert ever, I was so nervous my hands were clutching the drum sticks.

But the joy and excitement of my first real concert kept me from worrying too much. From then on, I started taking more initiative as a singer and started moving more on stage. After some time, I created my own band where I played keys and sang. From that point in my life, I couldn’t see myself not singing.

Do you take special care of your voice when you’re not singing? Do you have any habits you would recommend to other vocalists?

Since I started my vocal journey, I don’t remember myself being a lover of any cold drinks. In Russia we don’t get served water with ice, so now I have a new habit of asking the waiter for water with no ice. My mom wouldn’t let me eat ice cream unless summer.

Living in LA, I can afford the occasional ice cream break. In general, I think cold or hot liquids never help your instrument.

Whenever I’m out at a concert or jam session, I don’t scream while talking or cheering. I’ve also learned to not drink black tea. Before one audition, I got a cup of black tea and went straight to the location. As most of you know, caffeine has a shrinking ability. So now I don’t drink coffee or black tea before important events.

How has teaching affected your own understanding of practice and performance?

As a teacher, I always tell my students that practicing has to be done consistently, not perfectly. I’m an artist first and a teacher second.

But it’s always easier to tell someone to do something rather than doing it yourself. And I know a few teachers who are amazing musicians, but they’re not interested in practicing anymore. It’s really important to stay an expert on your instrument.

Is there anything you’ve learned from your students since you started teaching?

Teaching has definitely taught me patience and how to communicate with completely different people from different backgrounds.

With my voice students, I’ve learned how to show how I feel inside. It’s not a piano lesson where I tell my students to put this finger on this key. If they’re making a mistake, they can’t hide it. With voice, it gets trickier.

I’m not afraid to say I’m still learning and finding new teaching techniques. I think we should always aim for getting better no matter what to do. I’m beyond excited when it comes to learning something new and getting better at your craft.

And of course, as a singer, I believe there’s no end goal, you can always find something new to aim for. For instance, this week I learned how to record myself properly and I got paid for it. It’s just great to improve your skills even further.

What has been one of your most exciting performances so far?

I’d say performing with a Selah Gospel Choir at the Jimmy Kimmel Live Show with this amazing band you all know, U2. That was definitely the biggest opportunity I’ve had. I had an amazing time singing within another choir and a Gospel Grammy-winning artist, Hezekiah Walker.

I also loved my experience working with Armenian artists like Arto Tuncboyaciyan and Artur Mister X. It’s funny when you listen to the recordings of your favorite artists and end up working with them. That’s what happened when I met Artur at the wedding of a distant relative. I ended up being one of the background vocalists and sharing the stage of the famous Alex Theatre in Glendale.

A few months later, I performed there as a solo act. I still keep in touch with Artur and even played at his new piano bar about a month ago. One of the performances I’m also really proud of is when I gathered a  twenty-piece band and had a collection of songs in different languages including English, Russian, and Armenian. We even had traditional Armenian instruments.

But I would honestly say my favorite performances are when I get to perform in front of my parents.

Do you still get nervous before performances? If so, how do you calm yourself down and prepare?

Of course, but not as much as before. But I used to put myself in this little bubble and sort of meditate. When I was younger, my mom would stand next to me, help me with being nervous and encourage me. I loved those days when I used to perform in front of hundreds of people.

While I was on the stage, I would just get taken away by the power of music. That was and is still my goal, to share an incredible experience with an audience.