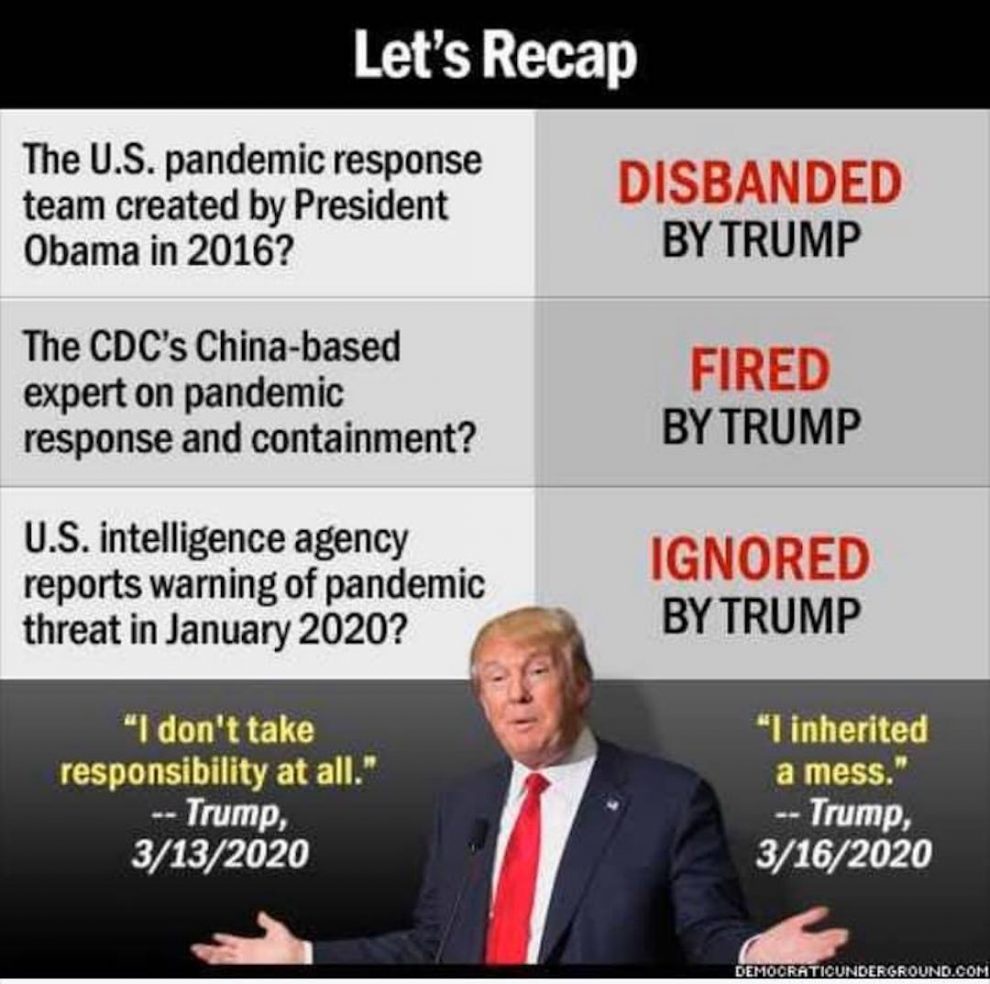 While Trump’s favorability is still under 50% it has been rising. In January when Trump was informed about the pandemic and ignored the warning his approval rating was 42.6.

The Washington Post on Saturday described the details of President Donald Trump’s blundered response to the novel coronavirus pandemic that led to the critical loss of time that might have avoided some of the worst outcomes the country is now facing. “It may never be known how many thousands of deaths, or millions of infections, might have been prevented with a response that was more coherent, urgent and effective,” the Post wrote. “But even now, there are many indications that the administration’s handling of the crisis had potentially devastating consequences.”

Other failures cascaded through the system. The administration often seemed weeks behind the curve in reacting to the viral spread, closing doors that were already contaminated. Protracted arguments between the White House and public health agencies over funding, combined with a meager existing stockpile of emergency supplies, left vast stretches of the country’s health-care system without protective gear until the outbreak had become a pandemic. Infighting, turf wars and abrupt leadership changes hobbled the work of the coronavirus task force.

Tracing the systematic failures of the administration during the first 70 days of the epidemic, Post reporters note that concerns about the possible pandemic were first raised several months ago.

The CDC learned of a cluster of cases in China on Dec. 31 and began developing reports for HHS on Jan. 1. But the most unambiguous warning that U.S. officials received about the coronavirus came Jan. 3, when Robert Redfield, the CDC director, received a call from a counterpart in China. The official told Redfield that a mysterious respiratory illness was spreading in Wuhan, a congested commercial city of 11 million people in the communist country’s interior.

At a Trump rally held while Covid-19 was invading the country Trump called it a hoax and said there was only 15 cases and that would soon be only 5 and the zero and then “less than zero.” Once it became clear Trump couldn’t bullshit the virus away or tweet the virus away he was forced to take it seriously. He played that like the reality TV personality he is, holding daily press briefings and trying to recapture his role on the Apprentice as the smart guy who was going to fix everything. His press conferences are full of misinformation, contradictory statements from one day to the next, outright lies and more than anything else, patting himself on the back for the great job he’s doing.

And guess what? It works for him. His 42.6 approval rating has surged to 45.4. Why? Do people only have 24-hour memories? Did they forget that his inaction and the false information spread by Trump, Fox News, Rush Limbaugh and the rest of the criminal gang is responsible for hundreds of thousands of infections and thousands of deaths?