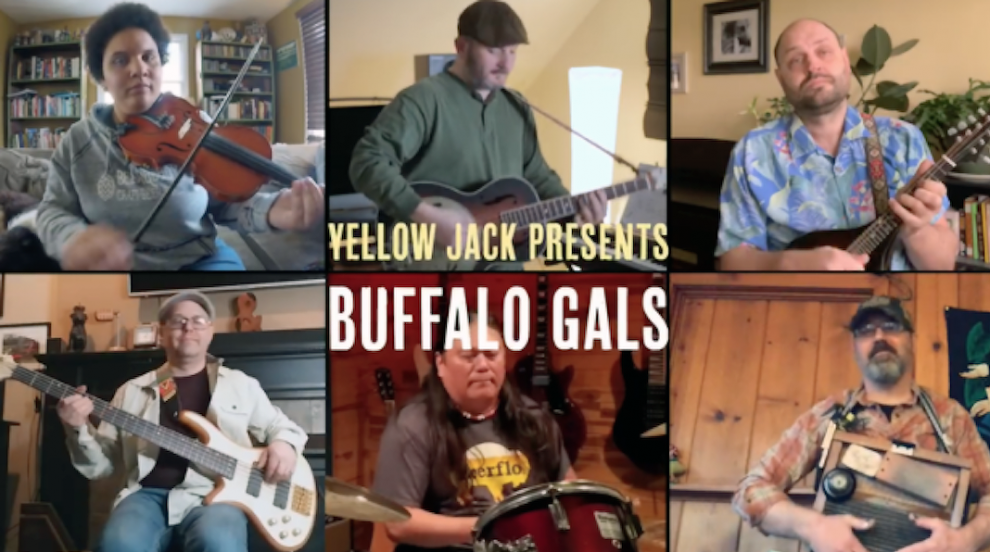 Rarely a day goes by when I don’t look for something uplifting to take my mind off of the current crisis at hand. Some days it’s as simple as petting an animal. Other days it’s appreciating artwork. Yesterday, it was watching a video by Yellow Jack, a Buffalo band that is playing some pretty awesome music while practicing social distancing at the same time.

The orchestration of the video was nothing short of brilliant. Not to mention the catchy Buffalo Gals song that should hopefully be familiar to us all.

After watching the video a couple of times, and then sharing with some friends and family, I decided to reach out to the band, to ask them about the production. The response was really quite something…

Rather than “tipping” the band, please consider making a monetary donation to the Food Bank of WNY or your local food bank to help those in need during these extraordinary times.

Alaina Reid (fiddle, vocals): It was fun to see the video actually come together in steps, from when we first talked about the idea, to seeing Dennis’s outline and sketch, to the actual finished product I actually found the hand sanitizer skit to be fairly hard to coordinate: put down the fiddle, “use” the sanitizer, pass it on, pick the fiddle back up in time for my solo. It took me a lot of attempts to get it right. One of the things I think we were able to demonstrate well in the making of this video is that social distancing just means physical distancing; even though we were never in the same room, we were still able to make a video of all of us together.

Keith Glass (bass, vocals): I think the video captures the spirit of the band just like we set out to do. On one hand, when we’re all together either in person or online, our sense of humor shines. On the other hand, we are very serious when it comes to our ability to deliver to a crowd and our collective talent when playing together. Both of these aspects were brought out in the end result of our video.

Andrew Gianni (mandolin, vocals): Folk music is the people’s music and it’s made for sharing, whether between musicians or with those who enjoy listening. Social distancing makes that challenging and, like a lot of musicians, we are trying to be creative about how we can work together without our usual in-person practices and live shows. The most touching thing for me has been the responses we have seen. There have been a lot of comments from people on Facebook reminiscing about a parent or grandparent singing the song to them when they were little. We make music to entertain but also to create an emotional connection for our audience and I love that this video has accomplished both of those things.

Dennis Reed Jr (guitar, vocals): “Buffalo Gals” has always been fun to play live. But it seemed to take on a new meaning in the midst of the COVID-19 pandemic, with its repeated chorus invitation to fellow housebound WNYers to “come out tonight.” It wasn’t a literal invitation anymore, like literally, “Hey, leave your house.” It became more like, “Show yourself, show your spirit, come out here into our new online social space, and show that what makes us Buffalo is still here.” It wasn’t planned that way. It just sort of happened. I think we mainly picked the song because it’s cheerful and we all sing in it. We’re all kind of local history buffs, and we write “new folk songs” about the area in addition to playing the properly traditional ones. One is called “Oh, Mighty Niagara,” and has a revolving set of verses about the various historical daredevils and characters that have been attracted to the Falls. The other is “The Legend of Hannah Johnson,” about an African-American fortune teller who lived in present-day North Tonawanda from about 1825 to 1883. I did quite a bit of research to write it. Some local historians have suggested that she assisted Underground Railroad efforts in the area. We have videos planned for these songs as well!