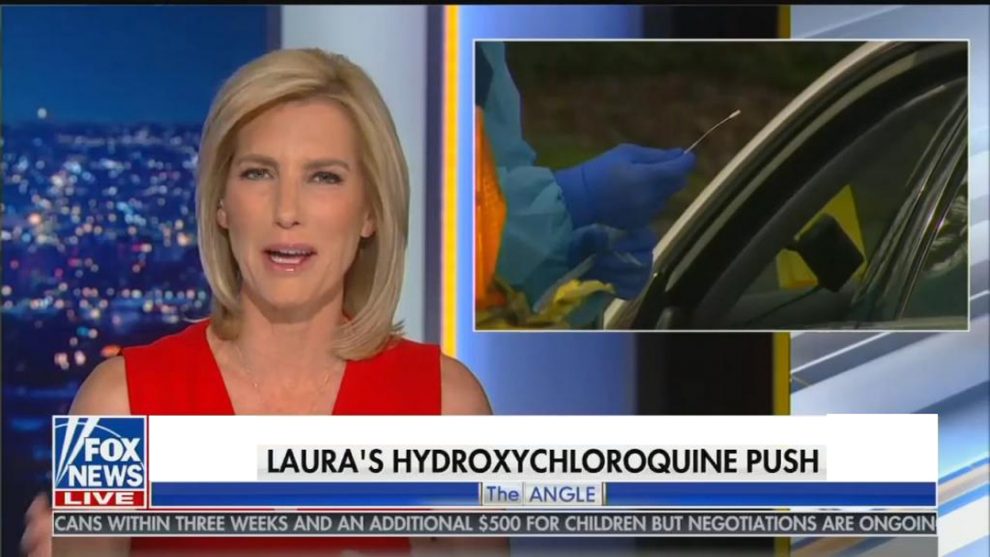 Paul Farhi and Elahe Izadi of the Washington Post report that “At the height of Fox News’s coverage of a would-be treatment for the novel coronavirus, the network’s medical correspondent, Marc Siegel, offered a remarkable testimonial during Tucker Carlson’s show.

Siegel said his 96-year-old father, suffering from symptoms of the virus and fearing he would die, made a full recovery thanks to the drug, hydroxychloroquine, and a course of antibiotics. “He got up the next day and was fine,” Siegel told an astonished Carlson.

Siegel’s miraculous-recovery story was part of a near-campaign for hydroxychloroquine by Fox News and its sister network, Fox Business.

Echoing President Trump’s description of the drug as a “game changer,” Carlson, Laura Ingraham, Sean Hannity, Lou Dobbs and “Fox and Friends” hosts spoke of its potential benefits in dozens of segments from mid-March to mid-April. They also criticized those in the media and the medical establishment who raised concerns, turning a debate among researchers and scientists into another front in the culture wars.

But in the past week or so, Trump has all but stopped talking about hydroxychloroquine. And so have Fox News’s hosts.

The relative silence follows disappointing, even alarming, new research about hydroxychloroquine as a treatment for covid-19, the disease caused by the virus. A study released this week on 368 male Veterans Affairs patients with the disease showed that the death rate among those given the drug, both in combination with another drug and alone, was higher than for those who were not. Researchers also said its use made no difference in the need for ventilators.

All You Political Junkies Either Listen to the NPR Interview or Read Jane Mayer’s article in the New Yorker about Mitch McConnel
WORDS MATTER: Study Finds Viewers of Sean Hannity Have Higher Rate of Covid-19 Deaths