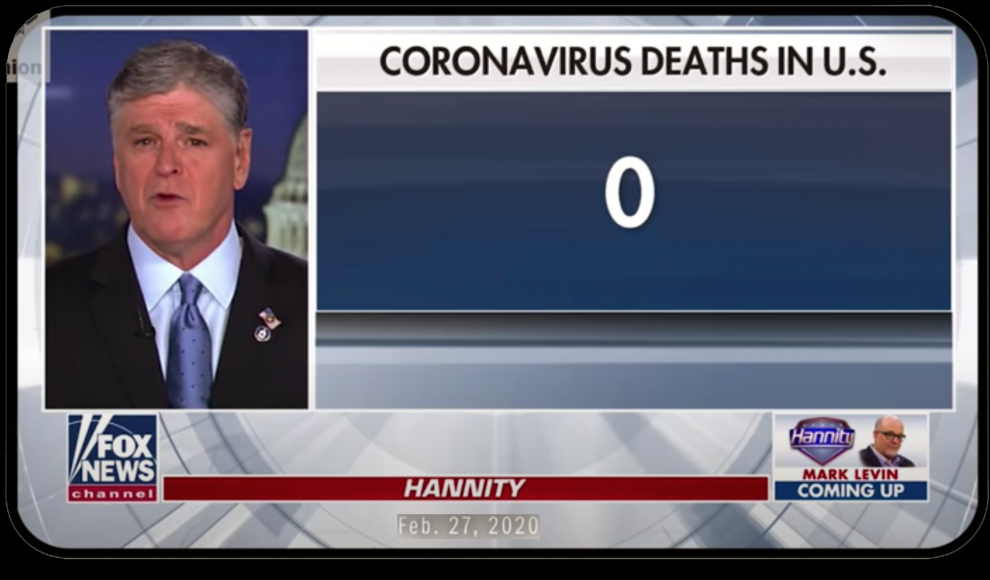 In the early days of the Covid-19 pandemic there was a stark difference between FOX News host Tucker Carlson and his colleagues Sean Hannity and Trish Regan. While Carlson warned the virus should be taken seriously and that it could infect over a million people (it’s already at 819,321), Hannity and Regan were saying the virus was not the threat the media claimed and that it was really about the democrats trying to hurt Trump. When Regan was on the air her bottom-of-the-screen graphic read  “Coronavirus Impeachment Scam” as she railed on against the media and the democrats. Regan has since been pulled from the station. Hannity was on the same page as Regan, claiming the virus was nothing to worry about and that it was just another case of the media and the democrats attacking Trump.

The Washington Post reported today that a new study from the University of Chicago’s Becker Friedman Institute for Economics researched Fox News viewers and found that viewers of Sean Hannity had a 30% higher death rate from Covid-19 than the viewers of Tucker Carlson who warned Covid-19 was a real threat. The report found that Carlson’s viewers started changing their behavior much sooner to protect themselves from the virus than Hannity viewers.

Washington Post reporter Eric Wemple wrote an opinion piece demanding that Hannity be removed from FOX, also noting Hannity was trying to rewrite history and claimed he had warned people early on that Covid-19 was a serious danger. This prompted Hannity to go on air and attack Wemple, who responded with a video filmed from his quarantine location.