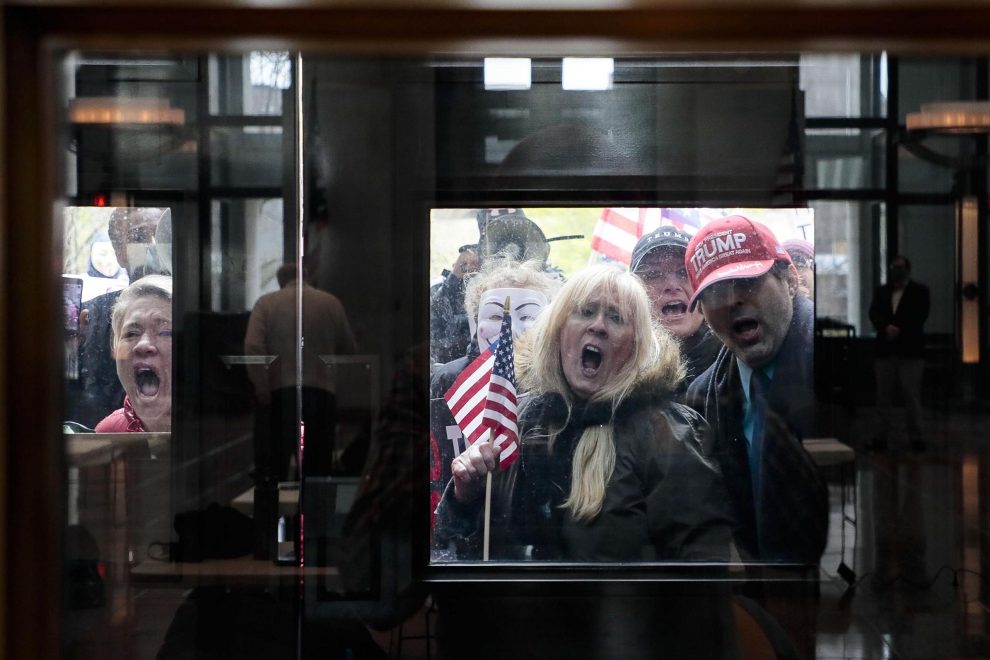 Martin Luther King Jr.’s question “Where do we go from here?” is timeless and I want to suggest we consider how to apply it to ourselves right now.

Recent scenes where I live show the devastating consequences of this divisiveness. Images of Ohio protestors—like a scene in a zombie apocalypse—banging on windows to demand an end to stay at home orders have gone viral. Memes have been circulating on social media to highlight the story of Marion resident John McDaniel who died of COVID-19 on April 15that the age of 60. Compounding the tragedy, his death is mocked because a month earlier, March 15th, he called coronavirus a “political ploy” and criticized his governor for closing non-essential businesses. His family ultimately decided not to have a public livestream of his funeral services because of the backlash and hype created in response to his ironic political positioning.

We can and must do better.

Allowing people to grieve the loss of loved ones is one of the most basic acts of compassion available in our shared humanity. Empathy prevents people from celebrating or showing delight for the suffering of others. There is lots of suffering these days; at the Marion Correctional Institution, just one of many Ohio prisons, there are at least 2,028 (out of just 2,500 inmates, so approximately 80 percent of all inmates and staff are infected) confirmed cases among inmates and staff. Paying a debt to society is not supposed to include contracting a potentially terminal illness. Care for one another cannot be predicated on politics and past mistakes. Enlightened self-interest would inform us that a virus cannot be so easily imprisoned, as the Ohio community is learning from prison staff who have been taking the virus home and out into the community.

In my research on forgiveness I found that people generally tend to believe that they are forgiving, and people tend to need time and truth in order to forgive. Making the space and time for healing during a pandemic is a challenge; we are unavoidably reminded of the current context all day long. The truth has been elusive, but it should not be.

It is not John McDaniel’s fault that he bought into the dangerous narrative that the coronavirus was a hoax. In a general sense we might blame him for not doing more research and identifying the truth, but he was conned—he believed the lies—and has paid a huge price for it. When Donald Trump lies people die. He has been allowed to lie on a near daily basis for three years. I confess that while I know I’m being lied to I struggle to find the truth and make good decisions. I cannot, in good conscience, blame the victim.

Haven’t we all had times in our lives when we had faith or hope that defied reason? I know shame and ridicule never motivated my personal growth. I’ve been conned and I still want to believe people; I would rather live in a world where I believe people are generally good. A student shared in class, “I voted for Trump and I’ve regretted it ever since.” It was probably very difficult to admit and accept the almost immediate betrayal.

Jesus said, “Father, forgive them, for they do not know what they are doing” Luke 23:34). It is a central teaching on forgiveness, at least for Christians. Unfortunately, for some families, watching Fox news and believing the chronic dishonesty coming out of the White House is the grave mistake. The liars need to be the target of the moral outrage, not the unfortunate dupes.

I understand the outrage, there are currently over a million infections and  more than 60,000 ,000 COVID-19 fatalities in the US in a month and a half (more US mortalities as 20 years of war in Vietnam from first US military in to last US military out) and the numbers could have been much lower if we’d had competent and honest leadership in charge of the response.

The White House has not shown any empathy for the victims and Fox news is apparently only worried about limiting their legal exposure from perpetuating the deadly fraud, but no concern for actually presenting life-saving truth. The cruelest aspect is the clear lack of accountability and the perverse bragging about doing a great job by these perpetrators.

Those who suffer the most are dying without adequate health insurance–or going bankrupt to stay alive. Safety nets are disappearing and communities are being increasingly divided. Now, more than ever, we need to love our neighbors and find charity, compassion, and empathy. You can even love Donald Trump, though I am reminded that Jesus never said I should likehim, nor believe a word he says.

Coronavirus outbreaks in more than 48 U.S. meat packing plants
LAST FESTIVAL ON EARTH: From Paradise to Hell: Trapped at a Music Festival Because of COVID-1
Comment