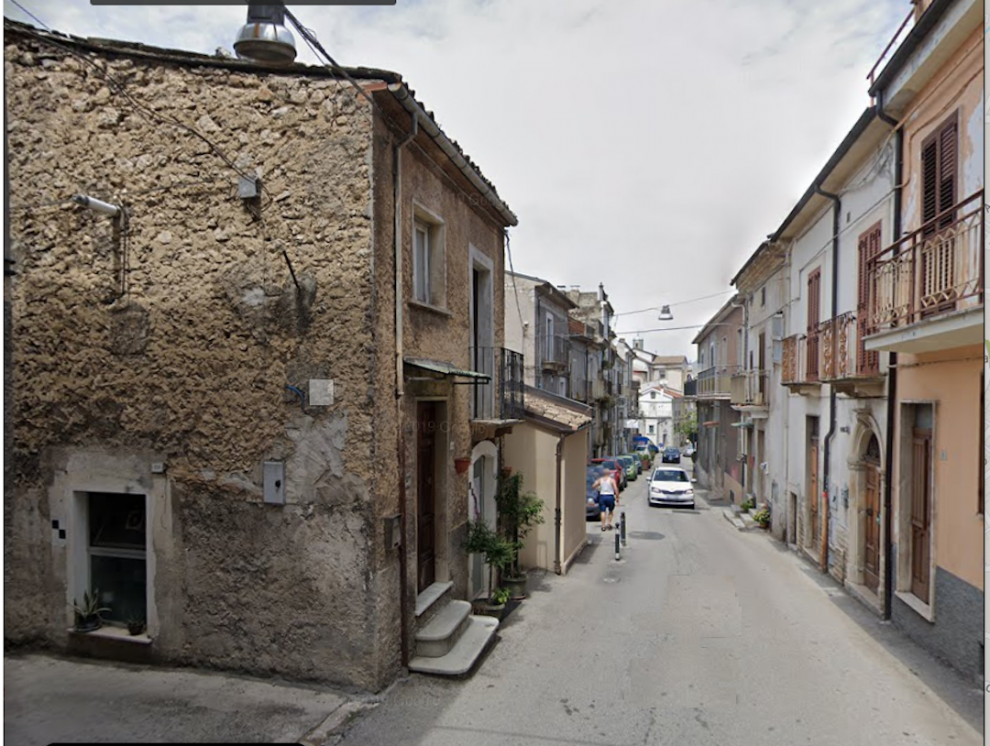 Dating back to the early 1900s, the Bruno family was primarily concerned with well-maintained vineyards, producing fine wine for sale and for family consumption, subsisting on vegetables like tomatoes, corn, potatoes, onions, and green peppers grown on their other, non-vineyard farmlands.My grandfather, Loredo Bruno, had five children (all deceased): three daughters, Annuncia, Calarice, and Lucia, and two sons, the older Antonio and the younger Liberato, my grandfather, “Nonno,” and he was father to Elio Bruno, my father, “papa.” My father had two older brothers, Giovanni (deceased), the eldest of all, and Cosimo (deceased), second son, and two sisters, the older Aquilina (still living) and the younger Silvia (still living); my grandmother, “Nonna,” was Anna (deceased). We have numerous cousins living in Italy as well.

My father’s family lived in Pratoloa Peligna, Italy at 48 Via Pasubio (photo above), not more than three blocks from La Madonna Della Libera, the Catholic Church, in town. The family home was a small, cement-block unit, with a kitchen and two tiny bedrooms, and connected to a 20-unit, block- long, housing complex, in effect. Furthermore, it was definitely crowded conditions for two parents and five children to endure in that small house, but they managed. The girls slept together and naturally separated them from where the boys slept; it all worked out, miraculously.

The street, Via Pasubio, was not really a street; it was an alleyway that separated these complexes, cement fortresses, on both sides, much like the vivid images portrayed in the Oscar-winning movie, “Godfather II,” when Michael Corleone fled the US and was living, for a brief time, in Sicily, strolling through his old neighborhood with cement fortresses around him as well, locating his father’s, locked-down home in astonishment.

They were built in the late 1800s, gray housing monuments built for posterity, and the alleyway was only eight feet in width, barely fitting a small, compact vehicle through the tiny path. Those alleyways were originally built for horses and small carriages, at most, not cars.

The Bruno family home had a small basement, “la cantina,” for winemaking and storage. Also, they owned a donkey and would raise a piglet each year for the slaughter and roast, with peppers and onions, for the Easter celebration: This was an annual tradition for the Bruno family.

By the end of October of every October, “Nonno” Bruno would produce an enormous, vat container of wood of wine, 200 total cubic feet of wine, for sale and sustaining the economic needs of a family of seven in those early days in Italy. Agriculturally, the Bruno family owned four acres of farming land that they utilized for their vineyards, only. They owned a fifth acre that they exclusively designated to grow and harvest their own vegetables for subsistence.

My father would work the farmlands with his papa and two older brothers when it came to stripping old vines, weeding, plowing, and tilling the multitude of rows of vineyards on those four acres. Importantly, they would not forget about the importance of tending to their own acre for their vegetable yields. “Nonno” would deploy his three boys in the early morning on different acres, depending on what work was a priority, and sometimes together, especially at harvest time when they had to work and pick fast, or the produce would go bad and rot.

Winemaking was a community affair from its creation to its enjoyment. The Italian model called for winemaking and fruit production as well and everyone was involved, even the daughters and “Nonna” at harvest time, especially, according to papa.

The winemaking lessons that papa attentively learned in sunny Italy were on display here when he and other immigrant Italians and their first generation, Italian kids strictly maintained and followed the old country ways, adopting and making it part of their new Americana: Italian style.

“From canning garden grown and curing meats to home brewing wine and spirits, the first generation harvested and processed their food in the same manner they would in Italy,” writes Melissa E. Marinaro in her article, entitled: “The Tradition of Winemaking in the Italian American Home.”

It was a matter of all hands-on-deck as everyone had a role in the wine and fruit production. Marinaro writes: “Each generation of the family helped with food production in some way or another, and homemade wine was no exception.” The operation was truly a cultural reflection of winemaking in Italy, and it was automatically established in America; the strength and inputs of Italian clans prompted winemaking in American cities, preserving Italian culture and tradition.

When papa joined mamma and me in May 1957, papa brought with him a bucketful of winemaking and fruit producing schemes and techniques he wanted to establish with Italian family and friends on Buffalo’s Lower West Side. Papa discussed it with other Italian family members and other immigrant Italians, looking for the magic to reproduce the robust taste of Abruzzi fine wines in Italy.

There was always a raging debate over the best winemaking techniques and processes, especially in important, wine-drinking sessions, inviting Italian debate, “la ragione,” the established truth: There was never a real consensus on wine, inviting more arguing, it seemed.

The winemaking we did was performed at our house at 513 Prospect Avenue on Buffalo’s Lower West Side. Papa and I would go to the Clinton Street Market and buy 20 dark red and five white grape cases in late September and October in the early 1960s up and until 1975, when it suddenly ended for me; it was tradition to crush and process the grapes in the basement with mamma’s help; sometimes a family relative would help.

The process was work, but it was fun because we were winemaking and the smell of crushed grapes had a pleasant, enticing aroma to me; it was culturally prideful, and it was easy to take it all in and just reflect Italian in everything we did, it seemed. When it came to winemaking, I did it all with papa, including hauling the cases of grape from the car down into the basement; typically, I soon became the primary crusher, and papa would do the grape pressing and funneling the grape juices into wooden barrels.

“Nearly everyone I speak with has a story about wine: loading and unloading boxes of grapes from a vehicle and crushing grapes with “Nonno;” betting glasses of wine on a Bocce game. It’s a tradition recalled with fondness,” remembers Marinaro. The stories are all different from family to family, but those winemaking times were more special and more memorable than we realized at the time we were winemaking as a family and as Italian people.

What once was an Italian tradition and trademark is no longer for the Bruno winemaking family, regrettably, not here in the US and not in Abruzzi where the winemaking originated and maintained for decades. What motivated me to write these two, related pieces on this great Italian tradition, winemaking?

This reporting insight would not be recorded here and described for posterity, if it weren’t for the fact that a family member, living in America, is an already, recognized writer and journalist. Who, then, can certainly retell the family tradition and passion for winemaking than a winemaking relative of a small-time, wine-producing Nonno Liberato Bruno in Abruzzi, Italy – Al Bruno, a grandson, and a teacher, coach, and writer in Buffalo, NY.