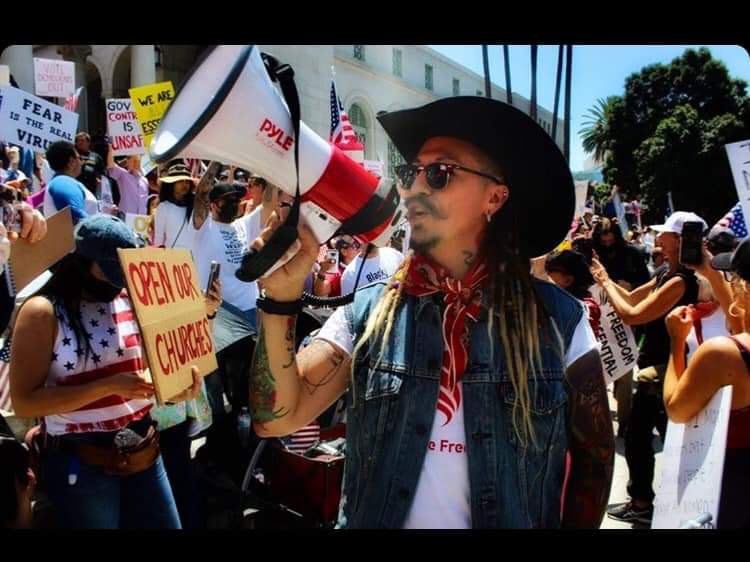 100,000 reporting for duty at the Liberty Fest in Sacramento at High Noon May 23rd to end government overreach and FULLY open the state

If graft, government over-reach and greed, had a name, it would be Gavin Newsom – Governor of California.

If paranoia, propaganda and panic had a name it would be Eric Garcetti – Mayor of LA.

Roll them into one, and you have the moniker of SLEAZE.

On a mission to free the state of California from lunacy, destruction and slime, Captain of the Freedom Fighting Battalion AND Emperor of Swag, Rodriquez is at the ready, poised on the front line, ready to charge. He has pledged to fully open the state and bring back the Swag to the great state of Cali.

Rodriquez is a leader…AND swag-a-licious.  Dripping with ‘Kool’, he leads his army on to victory against the oppression of impending slavery and, of course, he looks good doing it.  .

“People like Newsom, Garcetti and any officials pushing the agenda of tyranny are traitors to this country.”

In earlier times, treason was dealt with by public hanging in broad daylight for all to see.  Today, the closest one would come to that would be to hang them in effigy.

In homage to that tradition, the world will look on as 100,000 people converge on the California State Capitol in Sacramento, this Saturday, May 23rd at HIGH NOON,  to send a memo to the megalomaniacs inside that the people hold the power.

This is a peaceful protest of Americans who are going to take back the rights that have been stolen.

If they do not, the people plan on removing them from office.

With protests happening all over the world, this one promises to be one of the largest.

April 30th was the day the President had targeted to open the country back up.  He left it to the Governors to do their job.

Newsom extended the lockdown until May 15.

So, on May 1, 2020 forty thousand people gathered across the state to demand that the state be opened back up.

AFTER the protest, Newsom changed his tune and started opening the following Friday.

The Mayor of LA dug his feet in, so the next protest was outside of his house. Garcetti tried to ignore it.

“Enough with the political bullshit games. We are fully opening up the state of California and wresting power from the despots who think they can control us with slavery,” says Rodriquez, “We are not going to take this shit any longer.”

“Who the hell made the Governor GOD?”

Governor Newsom has tried to put a choke hold on the citizens of California by attempting to keep them in fear while he and his obscene cadre of face-lifted, denture-wearing, word-slurring, lying corpse cases (Garcetti, Pelosi, Waters, and Schiff-face) try to effect full domination and ultimate nullification of the great state of California so that they can usher in Communism through the ‘kinder, gentler semantics of ‘Democratic Socialism’ or ‘Progressivism’.

“Don’t be fooled by these twits.  They are nothing more than puppets for the Globalists.  They are mindless puppets who have sold their souls through blackmail and now must do the bidding of their master or face the ultimate humiliation of public exposition of their crimes,” continues Rodriquez.

Unfortunately, there are the blind, the drunk and the hopelessly stupid who, will listen to their drivel, for if they do not, they foolishly believe they might die, or that their gravy train will end.

Little do they know that the things they fear the most will happen if they DO listen to them.

“Who gave Newsom the right to decide what is essential and what is not?”

California is the 5th largest economy in the WORLD and Newsom has effectively destroyed it.

Let that sink in.

You can not go to church. You can not open your business, but you CAN buy marijuana.

“Small businesses are dying, families are breaking up, kids are anxious, and people are committing suicide daily.  Newsom, Garcetti and the gang have blood on their hands,” says Rodriquez, “The corps of sniveling, swinish pigs who are setting themselves up as paragons of virtue dictating to YOU that you do not have the right to see your dying loved ones in a nursing home or the hospital, telling you to be afraid, are themselves cowards.  They are petrified of losing their exalted positions.  Remember this: YOU PUT THEM THERE. YOU CAN TAKE THEM OUT.”

If one does not see a problem with shutting down the world, then one is part of the problem and the only advice WOULD be to self-quarantine…alone, away from the rest of society, for as a detriment to the rest of us, one is only in the way of the productive, the willing and the able.

“Which Twilight Zone episode are we living in?”

Rodriquez wants this to be a message to the people of the US of A: Governors imposing edicts which overstep their bounds are to be held accountable.  The people need to rise.  If you do not, then you deserve what you get.  Freedom is hard won and must be fought for.  It requires constant vigilance and a constant willingness to fight back.

The chains of slavery are rearing their ugly head in the year 2020 and unless you want to be a slave to gutless politicians who bow before their god of money and who have had their integrity compromised with little children, whores and sordid ritual,  who will control with fear, medical fascism and poverty, then you had better rise up and fight for your freedom and your children’s freedom.  Once it is gone, it is hell to get back.

Remember, you can vote your way into socialism, but you have to shoot your way out.

The way to win friends and influence people is NOT to take away their right to work and their ability to feed their families.  Of course, there are people who thrive on problems, and that is ok.  Those people can stay at home glued to their TV sets but, when people are denied the right to work, that is when the people will rise and protest.