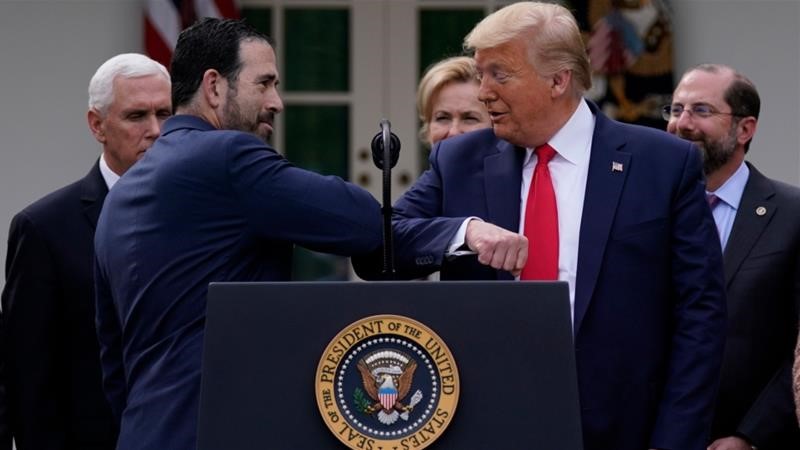 Donald Trump is the hot favorite to win a second term in office according to political pundits and political betting markets, a favorable nod that is largely down to the strength of incumbency.

In the history of the United States, only three presidents have failed to win a second term in office since the end of the Second World War. Gerald Ford (1976), Jimmy Carter (1980), and George W. H. Bush didn’t win a second term for various reasons; Ford didn’t mainly by his perceived association to Richard Nixon, and Carter and Bush didn’t because of general unpopularity with voters.

By the stats, incumbency yields approximately a 90% probability of winning the general elections. Indeed, recent trends in the presidential race reveal a 100% re-election ratio as the last three presidents in a row – Barak Obama, George W. Bush, and Bill Clinton – all won two consecutive terms in office.

It’s true that recent poll surveys show Trump’s approval rating hovers under 50%, which stands in contrast to the way the 2020 US Election markets are taking shape. But when did ‘the Donald’ ever really enjoy skyrocketing approval ratings in polls? He hasn’t ever. Not even before the last general elections which he went on to win resoundingly.

During the 2016 elections, polls favored Hilary Clinton by a country mile. And while Clinton did win the popular vote – by extension, underscoring the fact that Clinton had garnered the favor of the American public as the polls suggested – she went on to lose the general elections to Donald Trump, a result that sent seismic shockwaves through political betting markets then.

Trump defied the odds in 2016 by winning the electoral college vote, despite losing the popular vote by nearly 3 million votes. The quirky electoral college voting system of the United States worked in the ‘America first’ president’s favor. And it may do so again according to SBR.

What the odds suggest is that America doesn’t appear to be ready to wash its hands (pun intended) of the Trump administration, even in the face of growing criticism from his peers over the White House’s handling of the coronavirus pandemic.

Last month, Trump was pinned on 20/23 odds to win the 2020 US Elections, well ahead of his chief rival Joe Biden, the presumptive Democrat nominee. Not even political blunders – such as wondering aloud whether “injecting disinfectant” and “using UV light” to cure coronavirus –  appeared to be quite as calamitous as pundits predicted; nor were the repeated confrontations with the media during the White House Coronavirus Task Force briefings backfiring as expected at the time.

The economy has always been the administration’s trump card. Before the coronavirus outbreak, Trump’s bid for re-election was poised delicately on an American economy that looked to be fit as a fiddle.

Three years of his administration brought prosperity to key areas: the nation’s unemployment figures fell to the lowest rate in half a century; the economy added nearly 7 million jobs; stock prices hit record levels; household incomes grew; and paychecks rose by at least 2.5% after inflation, amongst other figures. [Source Factcheck.org]

Of course, all that is now undone as the public health crisis sets back America extraordinarily –as it has done other countries around the world. The ‘Great Lockdown’ has brought in a manmade recession that is fast putting the 1929 Great Depression to shame. Over 20 million jobs were lost in America alone in April, marking the largest single month of job losses since 1939 when the government first started tracking the data.

The International Monetary Fund (IMF) predicts the American GDP will shrink by almost 6% and the cumulative loss to the global GDP over 2020 and 2021 from the pandemic will be around 9 trillion dollars, greater than the economies of Japan and Germany combined.

In a crisis like no other, totally unprecedented in world history and one that brings indefinite uncertainty for as long as the coronavirus persists wreaking havoc, is it any wonder reopening America’s economy holds the keys to the White House?

Consider Medical experts and epidemiologists warn that this deadly virus may in fact never go away and certainly not in the foreseeable, in which case the world will be forced to coexist with it.

Why is this linking to the politics section? I see the same link but in “was poised delicately on an American economy” [AF1]