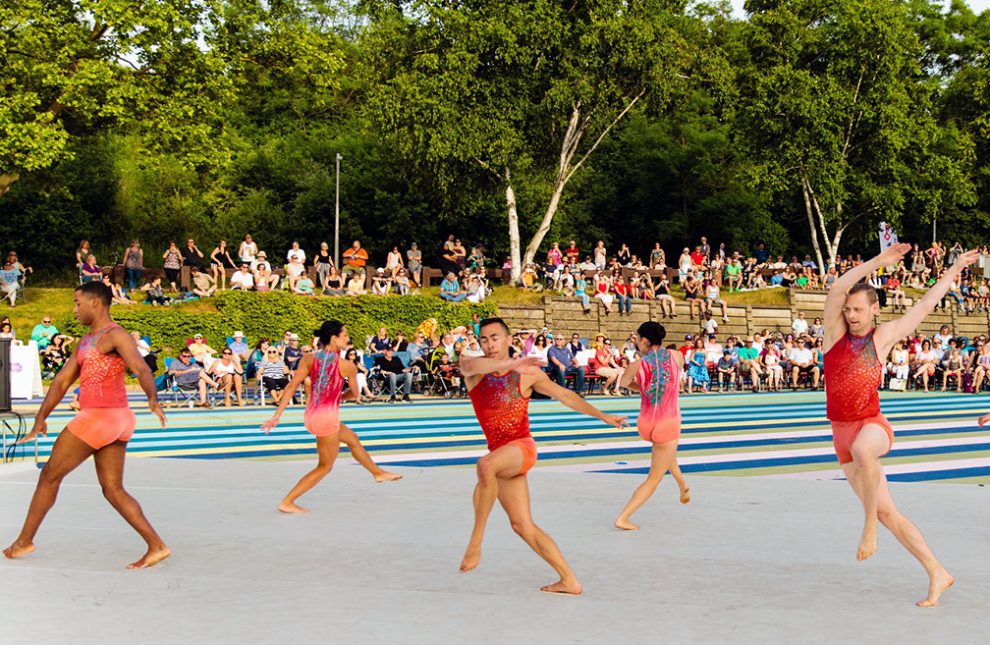 Summer in Buffalo is usually a wonderful medley of outdoor festivals, concerts, theater and art shows. We’re used to big crowds on sunny days attending some live performance or art show and lining up at food trucks and beer stands and enjoying the warm weather we waited for all winter.

Unfortunately, the summer of 2020 will be remembered for all the events that didn’t happen because of the Covid-19 pandemic. The season is canceled for everything from Canalside concerts to the Elmwood Festival of the Arts, the Italian Festival, Taste of Buffalo and dozens of other events. Nevertheless, the creative spirit of Buffalo is strong and most artists and arts organizations are finding ways to move forward.

Since 1976 one of the most popular outdoor attractions has been the free performances by Shakespeare in Delaware Park (SDP), whose season is canceled for the first time in its forty-four year run. SDP produces two plays each summer that are performed on their custom built stage on the hill behind the Rose Garden in Delaware Park.

Grace Aroune, Education/Community Outreach Associate for SDP, said that postponing the shows “was a hard decision, but it was one we had to make” for everyone’s safety. The shows that were meant to run this year, As You Like It and A Midsummer  Night’s Dream, will instead run next summer. The community has been overwhelmingly understanding of the postponement, according to Executive Assistant/Office Manager Sean Crawford, who said that “99.9% of

people that follow and interact with us have been very supportive.” One SDP regular, Denise Grandits, said that she was “disappointed that [her] favorite summer activity is cancelled this year” but that she understands it is necessary because “public health is more important.”

Actor Christian Hines, who was meant to perform with SDP for the first time this summer, was disappointed that he and fellow actors “never even got to put [the show] on its feet,” because it was postponed before rehearsals began. Regardless, he feels hopeful about working with SDP in the future. Actor Angelo Heimowitz said that hearing the shows were postponed “was bittersweet because I knew it was being done for the right reasons, but it’s always disheartening to know that something you were looking forward to was postponed.” Heimowitz has been acting with SDP for the past three years and expects to be back on the hill next year.

Heimowitz is also part of SDP’s upcoming 4-person, 45-minute touring show featuring some of the best scenes of Shakespeare. He and his three castmates have been rehearsing via Zoom, which is difficult due to audio timing issues, but it keeps the actors safely distanced from each other. Executive Director Lisa Ludwig is hopeful that the touring show, which will travel to different parks in the Buffalo area, will be able to safely run in August.

In addition, SDP has introduced a variety of free online content for the community. They have been posting one video a week to their Guest Artist Series, which features interviews with SDP cast and crew, giving the viewer a behind-the-scenes look at performances. The videos can be found on  Youtube and Facebook .

little bit daunting.” She also said that, while performing these monologues online rather than

in-person can be difficult, there is still energy that comes from a silent audience of even one or two people that “charges you to give more energy back to them,” so all aspects of performance are not lost through virtual connection.

Why do all this? When asked, Ludwig said, “if we can’t get people in the park, we’re trying to give them as much as we can.” Ludwig and the rest of SDP see the value in bringing free content to the community. To them, SDP’s driving focus is the community that is built through these performances and education content. These programs are made possible, Ludwig said, by their “local business sponsors who have been wonderful” to them as well as the thousands of audience members “who graciously donate every year.”

Like SDP, Artpark has modified their programming to make it safe for the public. Many concerts and other live shows have had to be cancelled or postponed, but that has not stopped them from keeping the creativity flowing in new ways. Executive Director of Artpark Sonia Clark said that “staying creative and adapting to the new reality” have been key in keeping positivity among the community.

As in previous years, Artpark will be putting on their Strawberry Moon Festival. The festival will still include Native American cultural activities, and this year will feature a performance by the Buffalo Philharmonic Orchestra, modified to ensure that safe distance can be kept between orchestra sections. Artpark is also commissioning a work by theater artist Taylor Mac, who will be working on it as part of an Artist Residency. He will be returning next summer as well for a public performance.

In addition to Taylor Mac, Artpark has commissioned Rob Lynch and Matt SaGurney to lead their Parking Lot Mural Project. Clark envisions the mural to be the result of collaboration from many artists, with Lynch and SaGurney taking the lead. Clark said that the goal of the mural is to showcase underrepresented voices in the community and to “represent our shared humanity.”

There are many other distance-safe events that are listed on Artpark’s website, including The Art of Walking, which combines nature and poetry, as well as the Fairy House Festival, which will feature walk-throughs of fairy houses. Rather than focusing on any loss, Clark spoke of all the positive creativity coming to Artpark this summer, saying that there is “no going back. We are just moving forward.”

With coronavirus-related restrictions, artistic hubs in Buffalo like Shakespeare in Delaware Park and Artpark have adapted and shifted the face of live arts events in the area.